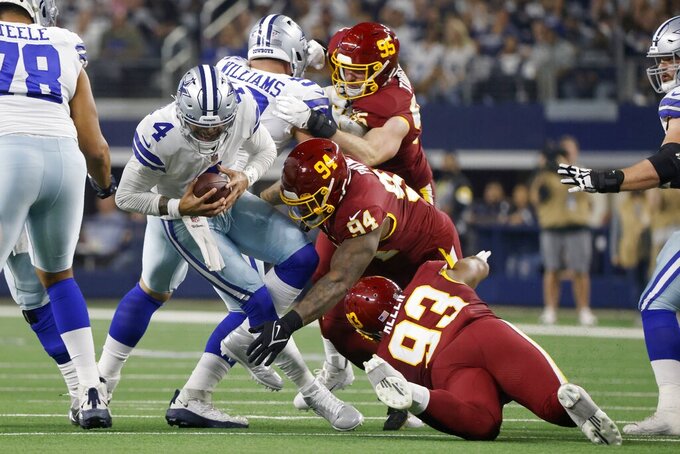 Ron Rivera insisted Monday afternoon he had not seen video of the sideline fight between Washington defensive linemen Jonathan Allen and Daron Payne and felt no need to seek it out.

“From what the players have said, they’re good with it,” Rivera said. "It was like two brothers fighting and they’ve moved on.”

The veteran NFL coach was busy watching the game, instead, and that's understandable: The 56-14 blowout loss at the Dallas Cowboys gave him plenty of problems to deal with. A third consecutive defeat dashed Washington's playoff hopes, and Rivera hopes his team responds well to the latest dose of adversity.

"If we don’t learn from it, if we don’t understand exactly what it means and all that stuff, then it’s a waste of time," Rivera said. "Winning hides a lot of things. Winning masks a lot of things, and you have to really pay attention then to figure it out. But losing is right in your face, so if you don’t learn from it, if it doesn’t stand out to you, then you’ve really wasted that opportunity.”

Washington (6-9) was beset by a COVID-19 outbreak that led to a half-dozen regulars missing the Week 15 game at Philadelphia and Garrett Gilbert starting at quarterback four days after joining the team. Injuries to running back Antonio Gibson, cornerback William Jackson III and safety Landon Collins that happened during that 27-17 loss to the Eagles only dug a deeper hole.

The off-field problems have piled up.

Authorities said special teams captain Deshazor Everett was the driver in a fatal crash Thursday night, and the 29-year-old safety is expected to be away from the team for the foreseeable future because of injuries he suffered. Rivera said Everett had been discharged from the hospital.

Rookie linebacker Jamin Davis was a surprise, late scratch Sunday night after reporting possible COVID-19 symptoms to team doctors. The first-round pick was supposed to call the plays with Cole Holcomb in virus protocol, and Washington was forced to play with linebackers with limited pro experience.

“We've been dealing with a lot," Rivera said.

After a 42-point loss, not much. The only good news is there are only two games left in the season, and Washington's coaching staff and front office can shift into full evaluation mode for 2022 and beyond.

Defense, more than anything. The frustration boiled over for Allen and Payne early in a game that finished with Washington allowing 497 yards and the Cowboys converting on two-thirds of their third down chances.

“The last two weeks, it has been probably some of the worst football I’ve ever been a part of, including myself,” Allen said. “We have no one to blame but ourselves.”

Rookie receiver Dyami Brown hauled in a 48-yard pass for Washington's longest play of the Cowboys game. Brown has had an inconsistent first season in the NFL, but his presence alongside Terry McLaurin in the offense moving forward can only be considered a positive.

By throwing two interceptions in another ugly performance, Taylor Heinicke almost certainly ended any chance of going into next season as a candidate to be Washington's starting quarterback. The Heinicke magic from the four-game winning streak has faded.

Heinicke is still in line to start Sunday against the Philadelphia Eagles, but Kyle Allen could also see some action and may get the nod in Week 18 at the New York Giants.

“Not as an indictment of Taylor or anything like that, but just that we also wanna make sure we get a really good look at Kyle,” Rivera said.

Gibson played through a toe injury at Dallas, but for a second consecutive year that problem is expected to end his season. It would make sense for Washington to shut down Gibson and see what rookie Jaret Patterson can do with a bigger load.

7 — Completions by Heinicke on 21 attempts against the Cowboys, by far the fewest in a game during his career.

Attempt to play up the spoiler role in the regular-season home finale against Philadelphia. Trying to keep the Eagles from making the playoffs might be the only source of motivation Washington has left after so much has gone wrong in recent weeks.