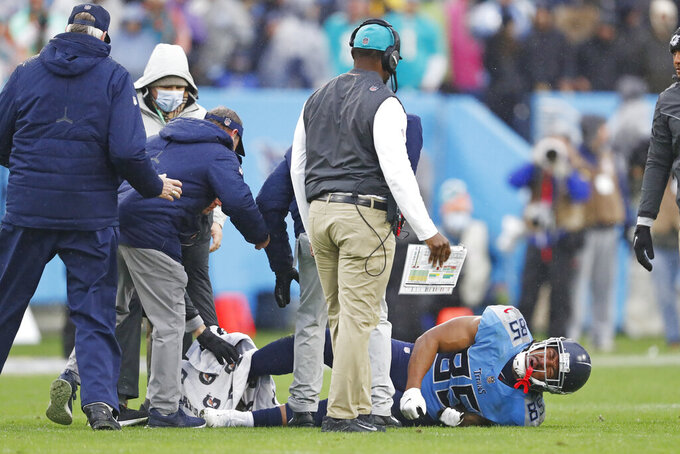 Tennessee Titans tight end MyCole Pruitt (85) is attended to after being injured in the first half of an NFL football game against the Miami Dolphins Sunday, Jan. 2, 2022, in Nashville, Tenn. (AP Photo/Wade Payne)

Seattle linebacker Bobby Wagner suffered a knee injury on Detroit’s first play from scrimmage on Sunday in what might have been his final home game with the Seahawks.

Wagner appeared to slip and went down awkwardly trying to defend a screen pass for Jamaal Williams. Wagner was down on the field for a few minutes before walking off on his own.

Wagner said during the week he knew it might be his last home game with the Seahawks. He has a $20 million salary cap hit in 2022 with Seattle looking at an offseason of change.

Tennessee Titans tight end MyCole Pruitt was carted off the field with a right leg injury after being caught up in a pile while blocking on a run by D’Onta Foreman in the second quarter against Miami. Pruitt’s right foot was bent as he banged on the field. A cart came out quickly, and an air cast was put on Pruitt’s right leg. Titans coach Mike Vrabel was among those who helped tight end off the field and onto the cart.

Dallas receiver Michael Gallup had to be helped off the field after injuring his left knee while scoring the first touchdown for the Cowboys against Arizona. The 21-yard catch by the fourth-year receiver pulled the Cowboys to 10-7 late in the first half.

Washington tight end Ricky Seals-Jones hurt his neck in a nasty collision with a camera operator on the sideline in the second quarter of a home loss to Philadelphia. Seals-Jones had his neck stabilized before he was lifted onto a stretcher and carted off. The cameraman had a cut on his nose but continued to work. Coach Ron Rivera said Seals-Jones was walking around and was OK.