Bolles has a new perspective in pivotal season with Broncos 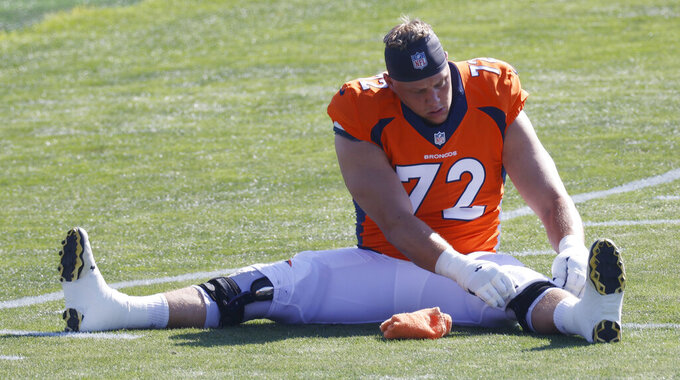 ENGLEWOOD, Colo. (AP) — Garett Bolles insists he never worried about the training camp battle he was slated to have with Elijah Wilkinson before Ja’Wuan James opted out of the 2020 season. Nor did he fret over the Broncos declining his fifth-year option.

“I was just worrying about getting myself better,” Denver’s long embattled left tackle said Thursday. They were his first public comments since late last season, when his holding habit drew the ire of fans and caused GM John Elway to question whether he even understood what constituted a penalty in the NFL.

“It’s all about me. That’s how I am this year. My zone is G.B. zone. I just want to focus on me, how I can get better,” Bolles said. “You can bring in Hall of Famer Joe Staley, Joe Thomas, it really doesn’t matter who I was competing against, I just have to get better with myself, I have to be the best version of me. And as long as I do that, I know where I can go and what I can do and what I’m capable of.”

The Broncos have been waiting a long time for Bolles to reach his potential. They drafted him in the first round in 2017 knowing he was raw and penalty prone, and although he’s been dependable -- starting all 48 games of his career -- he’s also been flagged a whopping 46 times.

This, however, marks the first time he’s had his same offensive line coach two years in a row in Mike Munchak, who says the continuity should be fruitful for Bolles in 2020.

“That’s huge for me. Me and Coach Munchak have a really great relationship. We talk regularly during practice, before the game, after the game, just trying to get me better,” Bolles said. ”... I’m just looking forward to our relationship continuing to get better. I trust him, I believe in him, I know he believes in me and I’ve just got to do everything that I can to make him know that he can trust me.”

Before settling down in December once the mobile Drew Lock took over at quarterback, Bolles’ propensity for penalties brought out the boo birds at home games.

“Listen, our fans are some of the best fans in the country; they deserve some of the best football here in Denver,” Bolles said. “We have a tradition of winning and it’s unacceptable the way that I played and I take full responsibility for it.”

He also used the catcalls to motivate him this offseason.

“Nobody likes to get booed, and so I took that upon myself to get better,” Bolles said. “I do whatever I can, you know, I worked hard, I put on 20 extra pounds, I did whatever I could to make myself better, the best version of me, moving forward because I know this is a very important season not just for me but for my family. This organization is counting on me to be the best version of myself and I knew whatever I had to do this offseason to get myself ready I did.”

Bolles said he knows this is a pivotal year, not only for his career but for the Broncos, who are out to avoid becoming the first team to miss the playoffs five straight seasons following a Super Bowl parade.

“I knew coming into here I had to do whatever I can to be the man so this organization can trust me, the fans can trust me and we can get back to where we belong and that’s in the AFC championship, to the Super Bowl,” Bolles said. “And that’s our plan ever year. I know we have the quarterback and the receivers to do that, the defense to do that. And now it’s just up to me to protect Drew all that I can.”

Bolles has big plans in Denver beyond 2020, too.

He’s hoping to play well enough this year that the Broncos give him an extension even though they declined his fifth-year option this spring that would have been worth $11 million in 2021.

“That was out of my control. I can’t dictate what Mr. Elway or those guys do, but what I can dictate is how I play on the football field,” Bolles said.