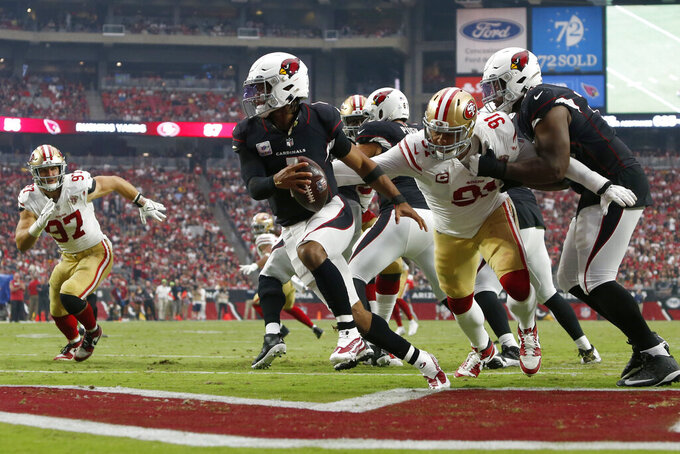 Good buddies Kyler Murray and Baker Mayfield, who each won the Heisman Trophy while quarterbacking at Oklahoma, get together in Cleveland on Sunday. Murray brings the league's last undefeated team, the 5-0 Cardinals, who have shown as much balance as anyone in the NFC. Mayfield's Browns (3-2) are the only team to rank in the top five in total defense and total offense.

The QB angle is so juicy, particularly with Murray leading the NFL in completing 75.2% of his passes, showing a maturity in his game that Mayfield struggles at times to master.

“We were surrounded by great teammates, great scheme and obviously good coaching down there at Oklahoma," Mayfield says. "There is an extremely high standard. They try to live up to each day, and that is what it is. That is why it has been the powerhouse for so long and it continues to be that way.

"Kyler, it was pretty fun to have him in the same quarterback room. That is obviously a tremendous player. For him to be patient while I took the extra year and did my senior lap year, it was just fun. We had a great room and a great team, and there was a high expectation for us.”

As there will be Sunday.

The action began with Tampa Bay-Philadelphia.

The defending Super Bowl champion Buccaneers (5-1) lost another cornerback when three-time All-Pro Richard Sherman left in the first quarter with a hamstring injury. Brady finished 34 of 42 for 297 yards and an interception.

The Eagles (2-4) are winless in three home games under rookie coach Nick Sirianni.

A showdown between two spectacular offenses led by young stud quarterbacks, and two teams with a penchant for pulling out late victories.

In his second pro season, Justin Herbert has been even more sensational than he was as the Offensive Rookie of the Year for 2020. Herbert has thrown for a league-best 11 touchdowns with no interceptions over the past three games. He has 11 300-yard games in 20 starts, the most by a player in his first two seasons.

Lamar Jackson, the 2019 NFL MVP, comes off a stunning comeback victory and the Ravens rank first in overall offense despite being plagued by injuries.

"Man, it’s special. He’s just scratching the surface on how good he can be,” Ravens defensive lineman Calais Campbell said. “I think he’s still 24 years old. I mean, this is crazy — what he’s capable of doing. I know he’s notorious for what he can do with his legs, and I feel like he got a lot of disrespect on his arm talent, and I think a lot of people are eating their words right now.”

While the Bears have a chance to tie the Packers for the NFC North lead with a victory, beating Aaron Rodgers has been a real task. The Packers have won 19 of the past 22 meetings, including playoffs, and are 21-5 in games Rodgers has started. In one of the losses, he left with an injury after the opening series.

“Little Green Bay was getting beat up for a long time by our foes to the South,” Rodgers says, “and then Favrey (Brett Favre) showed up and we closed the gap, and then we’ve overtaken them. It’s nice.”

Will the Lions ever get a break? Detroit has lost nine straight, going back to last season, and they are getting particularly excruciating as opponents kick field goals at the end for victories. Its best player, center Frank Ragnow, is out after season-ending toe surgery.

“Obviously, it sucks to lose that way,” quarterback Jared Goff says, “but you give yourself 24 hours or whatever you want to call it and come back refreshed and rejuvenated. And to be honest, in our building, it’s not hard with the way (coach) Dan (Campbell) is and the way our guys are. If you aren’t that way, you stick out, and I think we’ve got a good energy about us and a good resilience.”

Cincinnati has won the past six matchups and has won 75% overall for its best winning percentage against an opponent. The Lions’ most recent win in the series was in 1992.

This one could get ugly, particularly with the Giants having quarterback Daniel Jones (concussion), running back Saquon Barkley (ankle), and wideout Kenny Golladay (knee) getting hurt last weekend.

LA is a balanced team that likes the road: 25-11 away from Los Angeles during coach Sean McVay’s 4-plus seasons in charge. Their explosive offense includes WR Robert Woods, who had a season-high 12 catches for 150 yards against Seattle, and Cooper Kupp, third in the NFL with 523 yards receiving; second with 37 catches. The Giants’ defense is ranked 29th overall.

Washington was supposed to have a solid defense, Kansas City not so much.

Yet neither club has had success stopping people. The Chiefs rank 32nd in scoring defense, with Washington one spot ahead.

KC has dominated this series, winning the past seven meetings. Washington’s last victory against the Chiefs came in 1983, before current coach Ron Rivera made his NFL debut as a player. Rivera is the fourth former assistant of coach Andy Reid the Chiefs have faced in the first six games. They lost to John Harbaugh’s Ravens and Sean McDermott’s Bills and beat Kevin Stefanski’s Browns.

Kansas City has won nine of 10 road games going back to the start of last season.

How will the Raiders react to all the turmoil resulting in Jon Gruden resigning as coach after reports of racist and homophobic emails he sent through the years? They have turned to special teams coordinator Rich Bisaccia, a very popular coach among the players, but Las Vegas wasn't performing very well since starting 3-0.

Neither team does much early in games. The Broncos haven’t scored a touchdown on an opening drive under offensive coordinator Pat Shurmur (21 games) and their league-long drought stretches to 24 games. The Raiders are one of three teams without a touchdown in the first quarter this season and have failed to score on the opening drive in 11 straight outings.

A series of streaks. Dallas won the first seven, has lost the past six to New England dating back to 1996.

The Cowboys have the playmakers on offense with Dak Prescott, Zeke Elliott and a deep group of receivers, and now on defense as well. With two takeaways, the Cowboys will tie the franchise record of 10 consecutive games of forcing multiple turnovers. In cornerback Trevon Diggs they have the NFL leader with six interceptions, at least one in all five games. The second-year player can tie the league record of six straight games with at least one pick to start a season and, get this, among those with the record is the late Tom Landry, who coached the Cowboys for their first 29 seasons.

New England needed to rally to beat weak Houston last Sunday, but it did tighten up its run defense, a key against Dallas.

Here's how different things are in Seattle: Russell Wilson (finger surgery) won't quarterback the Seahawks after he started 165 consecutive games, regular season and playoffs combined. And the defense is atrocious, allowing 450 yards or more in each of the past four games, tying an NFL record.

“We understand there’s a lot of people who are counting us out, a lot of people that believe we can’t do it,” standout linebacker Bobby Wagner said. “We’ve proved people wrong in the past before, and I don’t see why the future doesn’t turn out the exact same way.”

Pittsburgh lost top wideout JuJu Smith-Schuster for the season with a shoulder injury, but still has enough playmakers to test that struggling defense.

The Bills have looked elite and lead the league in several categories on both sides of the ball. They are scoring the most points per game with 34.4 and allowing the fewest with 12.8 a game; are tops with 15 takeaways and with a plus-11 turnover margin; have scored 35 or more points in five straight games; and won an NFL-record 14 straight when leading at halftime.

Which means Tennessee must establish the running game early. Derrick Henry leads the NFL with 640 yards rushing and seven TD runs. He has the most yards on the ground through five games since DeMarco Murray (670) in 2014 with Dallas.

This one could be all about the sacks.

Carolina has a strong pass rush led by Haason Reddick. The edge rusher has 6 1/2 sacks through five games, 14 in his past nine games going back to his time in Arizona. He has at least 1 1/2 sacks in each of Carolina’s three home games.

But the Panthers' Sam Darnold has been sacked eight times and hit 19 in the past two games. The Vikings have 17 quarterback sacks this season, second most in the NFL, and DE Everson Griffen has four sacks in the past three games. Griffen has six sacks against Carolina.

Folks in the United Kingdom must be wondering what the NFL is doing: All four of the teams playing in London this season have had one victory or less. Not exactly the best selling point for American football.

Jacksonville has lost 20 in a row, the second-longest skid in NFL history to expansion Tampa Bay's 26 set in 1977. Jacksonville is playing its league-high eighth game in London. The Dolphins are playing a fifth in London, the second most.

While the Texans were expected to struggle, and they are, the Colts are among the NFL's most disappointing teams. But this is a chance for Indy, coming off blowing a 16-point fourth-quarter lead at Baltimore, to rekindle the fires.

Indy has dominated this series with a winning rate of 61.2%. The Colts swept Houston last season and have won four of the past five. The Texans are 6-13 all time in Indy.