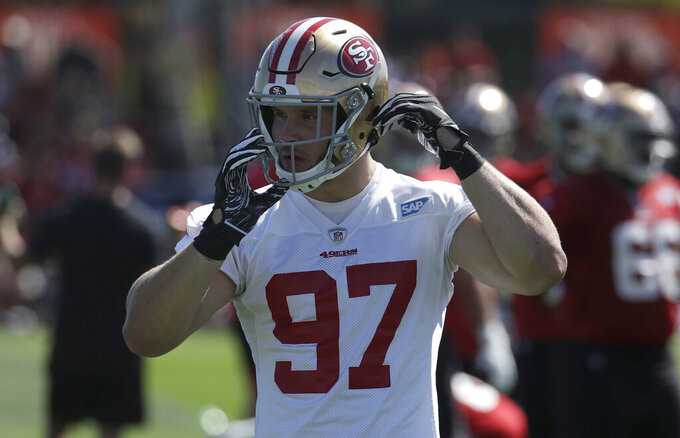 Bosa is coming off a torn bilateral core muscle, an injury which ended his final season at Ohio State. After the 49ers drafted Bosa with the second pick in April's draft, he pulled his hamstring during the first practice of the offseason while participating in a one-on-one pass-rush drill. He missed the rest of OTAs and minicamp.

Now, the 49ers have cleared Bosa to do everything in training camp.

"You always want them to go to OTAs as a rookie, because you throw a lot at them," coach Kyle Shanahan said. "But, you don't judge guys in OTAs, especially rookies. They just learn the playbook, do a few things, get away, come back, and it's time to go. Bosa got hurt the first day, so he wasn't able to practice, but at least he was around here. He got to do everything except rush the passer, and rushing the passer is something he's done his whole life. Now he's just got to get back in to practice and get used to going against NFL O-linemen. I don't really consider him behind."

Bosa mostly played left end for the second-string base defense Saturday. But on third downs he played with the starters. And during his first play with the first-string defense, Bosa beat six-time Pro Bowl left tackle Joe Staley around the edge and almost stripped the ball from quarterback Jimmy Garoppolo's hands.

"(Bosa) got Joe a couple times today," defensive coordinator Robert Saleh said. "But, Joe is a seasoned vet. (Bosa) is going to find out very quickly that offensive linemen adjust in this league. He'll get a chance tomorrow to see where he falls after Joe makes his adjustments. Bosa has a chance to be great, but he's got to understand he's got to develop his game, otherwise they'll figure him out real quick."

Bosa is the younger brother of Los Angeles Chargers defensive end Joey Bosa, the 2016 Defensive Rookie of the Year, who has 28 1-2 sacks in 33 career games. In college, Nick Bosa had 17 1-2 sacks in 29 games.

The 49ers did not make Bosa available to the media Saturday.

"He has a great football pedigree," right tackle Mike McGlinchey said. "He's very polished as a pass rusher for a kid who is just 21 years old. He looks like this big, powerful guy, but he's smart enough to be able to use his hands, get down and bend around the corner. He put that on display today, which was pretty cool to see."

Like his older brother, Bosa uses fluid hips and violent hands to beat offensive linemen to the quarterback. "Bosa wins in close quarters," Saleh explained. "He wants you as close to him as possible, and then he just has an ability to flip his hips and get skinny in close quarters where most people need space so they can knock arms down and create angles for themselves.

"With Mike Tyson, the closer you got to him, the more trouble you were in because he loved to be in there tight. Same thing with (Bosa). He just gets in there tight, and then he can work his body and hands. His hand-eye coordination is pretty good."

Bosa showed how good his hand-eye coordination is when he beat Staley around the edge. But there is a long way to go.

"For me, he's a rookie with a helmet and no pads right now," Saleh said. "I just want to see him get better, be deliberate in his practice and see how good he can get."