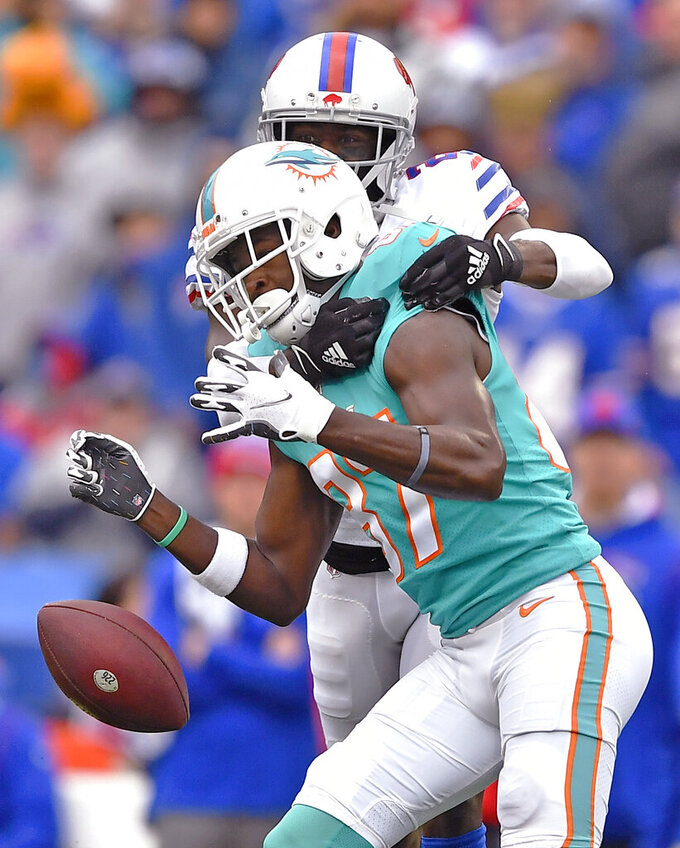 ORCHARD PARK, N.Y. (AP) — The Miami Dolphins have been accustomed to losing games on field goals as the clock runs out.

Their seventh consecutive loss on Sunday was decided much earlier this time.

A missed field goal and a ill-timed snap negated two potential scoring drives in the first half, which didn't help in a 26-11 loss to the Buffalo Bills.

In a season in which anything and everything has gone wrong, including three games decided by opponents' walk-off field goals, the Dolphins (1-7) have lost seven straight to match their worst skid since an 0-7 start to the 2019 season. The slump has raised questions regarding Brian Flores' job security and second-year quarterback Tua Tagovailoa's future.

Flores reiterated his support for Tagovailoa, whose record dropped to 7-7, and also deflected a question about his own job.

With the game tied at 3 and the Dolphins facing third-and-5, tight end Mike Gesicki went in motion from right to left. The snap from center Austin Reiter then hit Gesicki in the chest. The ball was booted around before being recovered by Bills safety Micah Hyde.

“It was just bad football there,” Tagovailoa said. “Bad operation.”

Gesicki agreed, saying it essentially sums up the team's woes.

“We’ve got to be able to line up and not make negative plays against ourselves," Gesicki said. "That’s kind of been the story so far, man.”

That wasn't the lone botched opportunity. Though Jason Sanders tied the game with a 51-yard field goal with the wind at his back, he opened by missing a 36-yard attempt wide left into the wind.

In the third quarter, the Dolphins had another opportunity to score when Buffalo's Isaiah McKenzie muffed a punt inside his 10. Several Dolphins had a chance to recover before the Buffalo's Jake Kumerow got a piece of the ball rolled as it rolled out of bounds for a touchback.

The Bills responded by scoring 23 points on their final four possessions in beating their division rivals for a series-record seventh consecutive time.

“It's important you get on that ball or else it's a totally different situation,” Bills coach Sean McDermott said of Kumerow's effort. “We’re not getting the ball potential there or whatever. It’s touchdown them or whatever.”

The Dolphins put themselves in a position to be competitive by limiting the Bills to a season-low 120 yards offense and 3 points in the first half. The difference was the Dolphins' own inability to score.

Tagovailoa finished 21 of 39 for 205 yards and an interception. He did lead the Dolphins to a second-half touchdown, which he scored on a 1-yard plunge. He set that up by hitting Gesicki on a 40-yard pass. His latest outing won't ease speculation of the Dolphins' interest in acquiring Deshaun Watson before the NFL's trade deadline on Tuesday.

“It wasn’t up to par, that’s what I would say. Obviously we didn’t win, so it’s kind of how I judge a lot of how we do, not just myself but offensively, it’s kind of how we judge our games," Tagovailoa said. “Unfortunately it hasn’t been going our way, the way we want it to. But we’ve just got to keep going.”

Dolphins defensive tackle Christian Wilkins said the team has to move on.