Bradley Chubb, Garett Bolles get into fight at Broncos camp 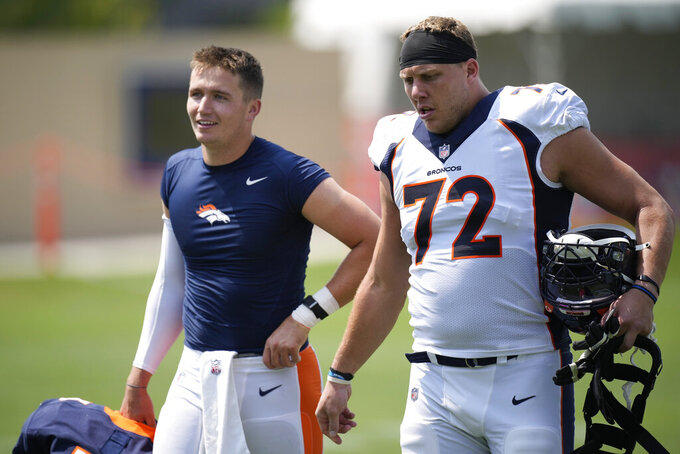 ENGLEWOOD, Colo. (AP) — There was finally some excitement at the Denver Broncos' training camp — and it had nothing to do with the drudging quarterback clash between Teddy Bridgewater and Drew Lock.

Pass rusher Bradley Chubb and left tackle Garett Bolles got into a fight during a team drill midway through practice Saturday and kept chirping at each other afterward.

Keeping them apart to keep the confrontation from reigniting were teammates, assistants and even head coach Vic Fangio and general manager George Paton.

With tempers remaining high and both men threatening to beat the snot out of the other, Bolles retreated to the locker room to cool off before returning to the field and eventually shaking Chubb's hand during a water break.

Chubb is coming off a Pro Bowl season and Bolles is coming off a breakout year that led to a $68 million extension. They are two of the foundational players for a franchise aiming to end a five-year playoff drought.

“I don’t think it’s a big thing that it was those two,” Fangio said. “Any fight, we don’t need and we don’t want.”

The Broncos, who are heading to Minneapolis next week for joint practices with the Vikings ahead of their exhibition opener, turned on the crowd noise midway through practice, which didn't feature full pads but shells and shorts.

Lock was under center, and after a nondescript first play, Chubb and Bolles ended up on the ground fighting. Teammates rushed to break things up and the officials blew their whistles.

When they were pulled apart, a heated Chubb circled back and threw a punch that hit center Lloyd Cushenberry III.

Chubb and Bolles continued jawing at each other as others held them back as they tried to go back at each other.

After about 10 minutes, Bolles was sent to the locker room to cool down while Chubb remained on the field. Bolles chucked his helmet into a bin on the way into the building.

“He needed to go in there and gather himself,” Fangio said.

Paton and a couple of coaches, including assistant offensive line coach Chris Kuper went into the locker room to check on Bolles, who eventually returned to the practice field alongside Paton.

When Bolles went back in, he was facing outside linebacker Malik Reed while Chubb stayed on the opposite sideline. But at the next water break, Bolles walked across the field to shake Chubb's hand.

Fangio said he didn't know what precipitated the fight. Neither player was made available after practice and several players who did talk declined to address the fracas.

NOTES: ILB Justin Strnad (cramps) and KR Dionte Spencer (sore knee) were held out. DL Mike Purcell (ankle) and WR Tyrie Cleveland (back) progressed to working on a side field. ... The Broncos return to full pads Sunday in a practice at their stadium.

By Tom Canavan just now
By Tom Withers just now
By Schuyler Dixon 43 minutes ago
By The Associated Press an hour ago
By Dennis Waszak Jr. 2 hrs ago