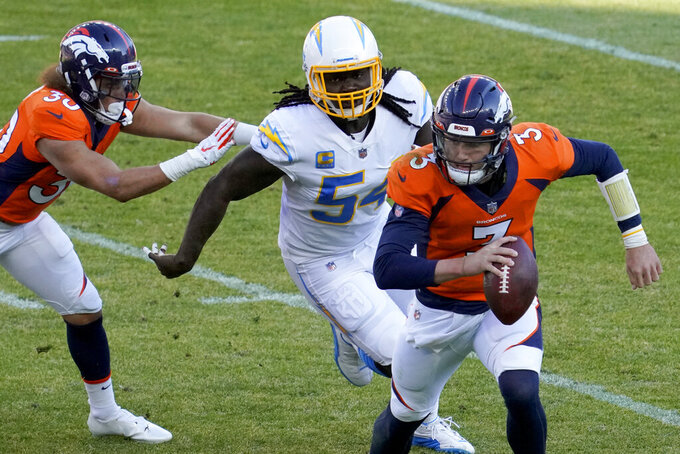 COSTA MESA, Calif. (AP) — One or two blown leads during a season can be torture for a coaching staff.

When it happens four times, very little is pleasant around a team.

Such is life this week for Gus Bradley.

The Chargers defensive coordinator is feeling as much pressure as coach Anthony Lynn after Los Angeles became the first team in NFL history to blow leads of 16 points or more in four straight games. The Bolts (2-5) host the Las Vegas Raiders on Sunday looking to get off to another fast start and maintain it throughout the game.

Even though Lynn hasn't singled anyone out for the second-half collapses, Bradley said he has taken the defeats personally.

“It comes down to execution, and that’s on me, I got to look at our players and make sure that we are not asking too much of them,” Bradley said.

Bradley's players have defended their coordinator, especially after Sunday's 31-30 loss at Denver during which the Chargers blew a 21-point, third-quarter lead.

Bradley’s emphasis this week has been on trying to simplify things to get everyone on the same page.

“The good teams learn as they go and that’s what we got to do. Just a couple X's and O’s we have to clean up,” defensive end Melvin Ingram said. “If we do that, we’re going to be all right.”

Los Angeles looks like one of the league’s dominant defenses in the first and second quarters. It is yielding a league-low average of 137.9 yards during the first half and has outscored teams 101-72. The Chargers have forced three-and-outs on the first three drives the last two weeks against Jacksonville and Denver.

The second half has been another story. The Chargers are surrendering an average of 226.1 yards, which is third-worst in the league, and are being outscored 113-78.

Los Angeles' defensive struggles have been especially evident in the secondary. The defensive line has been unable to get consistent pressure on the quarterback after halftime, which has put added pressure on the defensive backs. The unit has been short-handed since the start of the season after safety Derwin James suffered a season-ending knee injury during training camp. Cornerback Chris Harris Jr. will miss his fifth straight game due to a foot injury.

Safety Nasir Adderley was out of position on two Denver touchdowns last week and also drew a penalty for a late hit during one of the Broncos' fourth-quarter scoring drives. Cornerback Casey Hayward has been inconsistent.

Slot corner will remain a revolving door after Desmond King was traded to Tennessee. Tevaughn Campbell had a strong first half against Denver but drew a pass interference penalty in the end zone on the final drive of the game. That led to Denver's game-winning TD on the last play.

The Chargers might have to do more secondary shuffling against the Raiders. Hayward (non-injury related) and Brandon Facyson (illness) did not practice on Friday and are questionable. Lynn did not say if it was COVID-19 related and said the status of both was “a fluid situation.”

“Our issue is maybe you have 10 guys executing and one guy might not execute a certain play,” Bradley said. “And it’s not one particular guy. Maybe guys are taking turns a little bit. That’s what we’ve got to work on.”

The issues aren't confined to the secondary. Defensive linemen Justin Jones and Ingram both missed three games. Joey Bosa has been in concussion protocol all week and has been listed as doubtful for Sunday. Isaac Rochell would get the start if Bosa is out, but he is questionable with a neck injury.

There have also been execution errors. Bradley said one reason for Drew Lock's 1-yard TD pass to K.J. Hamler on the final play was because of an alignment issue on the defensive line.

“One bad mistake leads to something really big. We kind of know that as a defense and what we need to do to be clicking on all cylinders,” Hayward said.

Las Vegas (4-3) presents many challenges on offense. Derek Carr is completing 71.1% of his passes and Josh Jacobs ran for 128 yards in last week's 16-6 win over Cleveland.

“Derek has that offense rolling and Josh is a great runner. We have to out there and try to contain them,” Ingram said.

NOTES: QB Tyrod Taylor will be Justin Herbert's backup on Sunday for the first time. Taylor was the starter going into the season, but suffered a rib injury in the Sept. 13 opener at Cincinnati before being sidelined after having his lung punctured while receiving a pregame injection the following week. Herbert was listed on the injury report with right shoulder problems, but was a full participant in practice throughout the week. ... G Trai Turner (groin), who has played in only one game, is questionable.