Brady, Bucs look to rebound vs. Panthers after being blanked 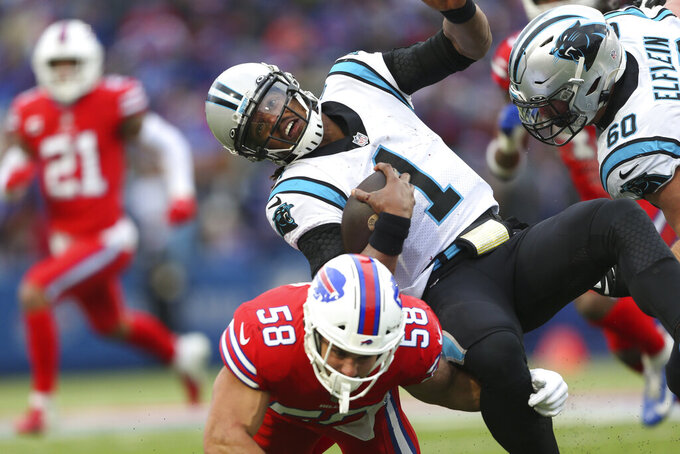 Carolina Panthers quarterback Cam Newton (1) is tackled on the run by Buffalo Bills outside linebacker Matt Milano (58) in the second half of an NFL football game, Sunday, Dec. 19, 2021, in Orchard Park, N.Y. (AP Photo/Joshua Bessex)

CHARLOTTE, N.C. (AP) — Tom Brady is expected to be extra motivated, which is normally not a good sign for his next opponent.

The seven-time Super Bowl champion will look to bounce back from an embarrassing 9-0 loss last week to the New Orleans Saints when they face the struggling Carolina Panthers on Sunday.

Brady even struggled to hook up with his longtime favorite tight end Rob Gronkowski, as the duo connected on just two of 11 passes.

“I don’t know. We didn’t play our best game, obviously," Brady said. "None of us. Just a bad day, so we’ve got to figure out how to move on and do a better job this week.”

It marked only the third time in Brady's illustrious career his team had been shutout and just the first time in the past 15 years, snapping a streak of 255 games including the postseason.

Brady will look to take out his frustrations on the struggling Panthers (5-9) on Sunday, a team that started the season 3-0 but has lost nine of its past 11 games and has yet to find an answer at quarterback.

The Buccaneers (10-4) can wrap up their first NFC South title since 2007 with a win and end the Saints' four-year run as division champions. Tampa Bay won the Super Bowl last season as a wild-card team.

Brady leads the NFL with 4,348 yards passing and 36 touchdowns. He’s four TD passes away from joining Aaron Rodgers as the only players in league history to throw at least 40 in a season three times.

“The mental game for him is so good,” Panthers coach Matt Rhule said. “I mean he's playing chess while a lot of people are playing checkers. He's so advanced with knowing what people are going to do against him, recognizing coverages, recognizing where the blitzers are coming from and knowing where to go with the football. ... I just have so much respect for the way he plays."

Cam Newton will start for the Panthers, but Sam Darnold will also see some playing time — although it's unclear how much. Darnold has missed the past five games with a shoulder injury.

Darnold was 4-5 as the team’s starter before being placed on injured reserve Nov. 12. Newton is 0-4 as a starter.

The Panthers still have a vested interest in Darnold, given they are on the hook for more than $18 million next season after picking up the fifth-year option on his contract. Newton will be an unrestricted free agent after the season.

Bell was released earlier this season after appearing in five games with the Baltimore Ravens.

“I could play as many plays as they need me to,” Bell said. “I think I am in great shape. I haven’t been playing football games, but just with my workout regimen, my diet and the things I have been doing over the course of this whole year — this is literally the best physical form I’ve ever been in. I’m excited. Whatever the coach asks me to do, I’m going to go out there and do it.“

Bell's arrival reunites the 29-year-old with former Steelers wide receiver Antonio Brown, whom the Bucs anticipate will play this week for the first time since a Week 6 victory at Philadelphia.

In addition to returning from an ankle injury, Brown is coming off a three-game suspension for misrepresenting his COVID-19 vaccination status. The Bucs are counting on him to make a difference with Godwin out after suffering a season-ending knee injury against New Orleans last Sunday, and with Evans (hamstring) week to week after also getting hurt against the Saints.

The Panthers were left without a kicker last week against Buffalo when Zane Gonzalez injured his quadriceps about an hour before kickoff. Gonzalez has since been placed on injured reserve and replaced by kicker/punter Lirim Hajrullahu.

The 31-year-old Hajrullahu made five extra points while kicking for the Dallas Cowboys earlier this season, but has never attempted a field goal in the NFL. However, he has plenty of experience. He was an all-star in the Canadian Football League, where he made 239 of 287 field-goal attempts and won a Grey Cup with the Toronto Argonauts in 2017.

The Panthers won their first two games at Bank of America Stadium to open the season 2-0. But they've stumbled at home since, losing their past five games by an average margin of 8.2 points.

Carolina has allowed 27 points per game in those five losses.