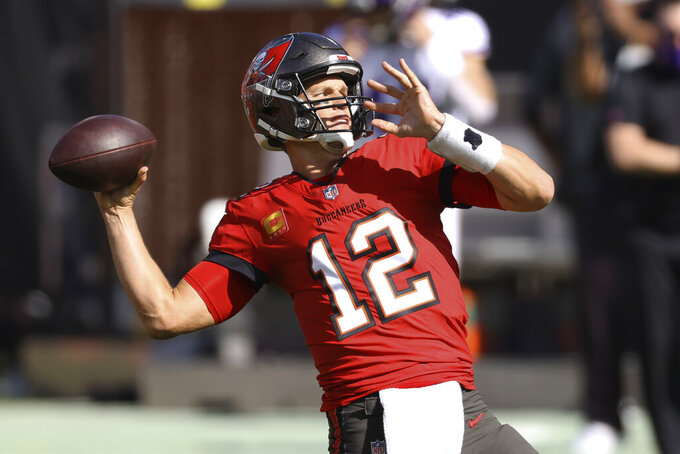 ATLANTA (AP) — At 43, Tom Brady is on the verge of proving he was the right choice to help Tampa Bay end the NFL's second-longest playoff drought.

At 35, Matt Ryan is determined to answer new doubts that he's still capable of bringing Atlanta back to the postseason.

The Buccaneers (8-5) could move closer to their first playoff appearance since 2007 when they visit Atlanta (4-9) on Sunday.

The Buccaneers currently hold the NFC's No. 6 playoff spot following last week's 26-14 win over Minnesota. Tampa Bay plays at Detroit next week before facing the Falcons again at home to close the regular season.

Brady is making no assumptions about the Bucs' path to the playoffs.

“Wherever that takes us, it takes us. It will be up to us to earn it,” Brady said. “No one is going to give you anything in the NFL. It’s too competitive, it’s too tough. Every week is a challenge.”

After 12 consecutive seasons of missing the postseason, Tampa Bay signed Brady after he led New England to nine Super Bowls, including six championships.

Brady holds the NFL record for quarterbacks with 30 playoff wins. One of his six Super Bowl championships came against Ryan and the Falcons. The Patriots rallied from a 28-3 deficit to win 34-28 in overtime in Super Bowl 51 following the 2016 season.

Brady is 6-0 against Atlanta. Ryan needs no reminders of the Super Bowl collapse, and he's not interested in revisiting bad memories by watching a replay of the game.

“I don’t pop that one in all that often,” Ryan said this week as he prepared for the visit from Brady's Bucs. "Different memory for him than it is for me.”

Falcons interim coach Raheem Morris, who was Atlanta's wide receivers coach in 2016, said he has no interest in revisiting the Super Bowl loss. He said he doesn't blame Brady if the quarterback celebrates his postseason success.

“No, that game’s in the past.” Morris said. "I hate Tom enough. I don’t need more motivation. ... He’s the best player in the game I’ve seen and when you’re the best and you’re able to prove it every single week, you have the right to put up your old Super Bowls and your old rings. ... I do hate him for it. I just hate him for it.”

Ryan threw a season-high three interceptions in last week's 20-17 loss at the Los Angeles Chargers. Including a costly poor pass late in the loss to the Chargers, Ryan has thrown eight interceptions in the last six games after giving up only three in the first seven games of the season.

Even while playing in the NFC South with Brady and 41-year-old Drew Brees of New Orleans, Ryan faced questions this week about his age and signs of a possible decline.

“My body feels great,” Brady said. “I feel like I'm fresh and I'm in a good spot. I haven't played as well as I'd like, and that happens sometimes.”

Tampa Bay linebackers Shaquil Barrett and Jason Pierre-Paul form one of the top sacks duos in the NFL. They’ve combined for five over the past two games and have 45½ since the start of 2019 —second highest for a tandem during that stretch behind Pittsburgh’s T.J. Watt and Bud Dupree, who have 46.

Cornerback Carlton Davis, who leads the Bucs with four interceptions, said Barrett and Pierre-Paul make him a better player.

“Having those guys on our edge definitely gives you confidence on the back end when you’re covering because you know the quarterback doesn’t have long before he has to get the ball out,” Davis said. “I love playing with those guys.”

A VOTE FOR MORRIS

Tampa Bay coach Bruce Arians would like to see Morris land another full-time job. Morris was 17-31 as Tampa Bay's coach from 2009-11 and is 4-4 since replacing the fired Dan Quinn this season.

“I would hope so," Arians said. "I think as you grow as a coach, you learn. I think for him, having had the development of coaching offense and defense while he’s in Atlanta just makes him even more of a better candidate. Obviously, he has a great rapport with players and players love playing for him. If you’re looking for a head coach, what else are you looking for?”

PULLING FOR A TIE

The only way Tampa Bay can clinch a playoff berth on Sunday is by beating Atlanta while Minnesota and Chicago play to a tie. There has been only one tie all season, Cincinnati vs. Philadelphia.

Calvin Ridley has emerged as Atlanta’s leading receiver as Julio Jones has missed four games with a hamstring injury. Jones' status this week is uncertain.

Ridley had eight catches for 124 yards with a touchdown against Los Angeles last week. It was his sixth game with at least 100 yards this season, tied for the NFL lead. The third-year player has career-best totals of 67 catches for 1,029 yards.