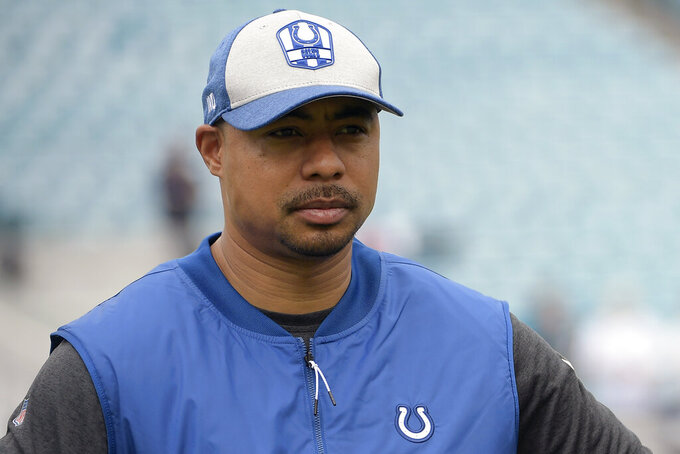 Instead of fretting, Brady is digging deep, working hard and adapting to the new reality.

“Every team goes through it, so it is really nothing new," he said Tuesday on an introductory video call. “Obviously, quarterback is a very important position, left tackle is a very important position so we have to address those issues. That’s a process we are going to be working on. Chris and his staff do a great job. (Coach) Frank (Reich) and I will put our heads together as an entire group and staff and put the best roster out there.”

For Brady, it's a new challenge.

He's spent 16 years in coaching, with Indianapolis being his only NFL stop. Brady joined Reich's staff as the assistant quarterbacks coach in 2018. A year later, he was named the primary quarterbacks coach. Now, he'll be in charge of the offense, even if he's not calling plays.

Brady has risen quickly through the ranks, even prompting interest from other teams before Sirianni's departure. The 41-year-old Brady now becomes the third Black offensive coordinator in the NFL, joining Kansas City's Eric Bienemy and Tampa Bay's Byron Leftwich the same week the other two made reached the Super Bowl.

Indy’s other four starting offensive linemen will return and rookie Jonathan Taylor cemented his role as Mack’s successor by topping 1,000 yards last season. Zack Pascal, rookie Michael Pittman Jr. and the oft-injured Parris Campbell headline a receiving corps that promises to be solid — with or without Hilton.

Even the quarterback transition seems relatively routine for Brady.

When the longtime Canadian Football League veteran was initially hired, Andrew Luck was the starter. Luck's abrupt retirement in August 2019 forced the Colts to go with Jacoby Brissett. Then last season, Rivers replaced Brissett. With Brissett also about to become a free agent and Jacob Eason the only quarterback under contract on Indy's roster, Brady will likely be working with his fourth opening-day starter in four years.

Ideal? No. But it won't faze the unflappably soft-spoken Brady.

“We adapt well to the players, not just the quarterback position but everybody that we have on the offense,” he said. “Once we finalize that position, which is a very important position, we will adapt the offense and tailor it to his strengths.”

Brady has other strengths.

After finishing his college career as the career passing leader at Cal State Northridge, Brady spent seven seasons playing in the CFL, learning the nuances of a different style of football. At age 28, he started coaching receivers with the Montreal Alouettes and one year as the offensive coordinator. In 2012, he took the coordinator's job with the Toronto Argonauts, where he called plays, until joining the Colts.

Brady was part of three Grey Cup championship teams, and now he hopes his experience in Canada will help him put together a creative enough offense — whomever is on the roster — to win a Super Bowl ring, too.

“All the movements and the motions – there is a little bit more variety there in that aspect, so you can get very creative offensively," he said, referring to his time in Canada. “There are a lot of aspects of the game where some of it has been brought down one way or another and some of the RPOs (run-pass options). I’ve learned a lot from the CFL and I’m able to bring it down here, just little nuances of the game there.”