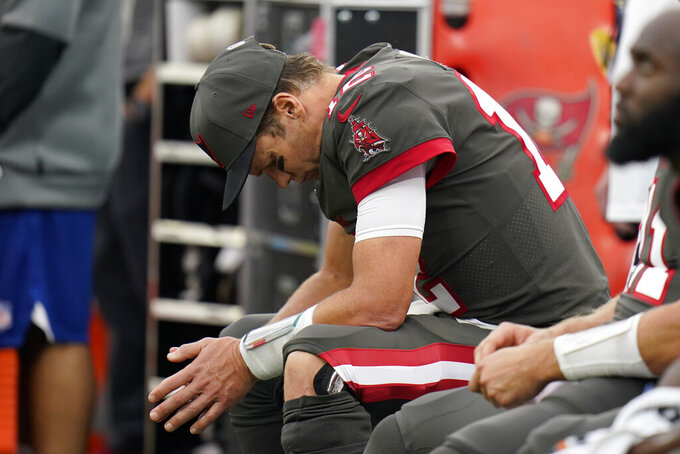 Tampa Bay Buccaneers quarterback Tom Brady looks down as he sits on the bench during the second half of an NFL football game against the Los Angeles Rams Sunday, Sept. 26, 2021, in Inglewood, Calif. (AP Photo/Jae C. Hong)

INGLEWOOD, Calif. (AP) — With the likes of LeBron James, Emmy-winning actor Jason Sudeikis and rapper Dr. Dre in attendance, Tom Brady’s first game in shouting distance of Hollywood was every bit the star-studded spectacle it was expected to be.

Brady played his part, but a lack of support from the Tampa Bay Buccaneers’ run game and beleaguered defense that gave up too many big plays proved costly in a 34-24 loss to the Los Angeles Rams on Sunday.

“Just not a great complementary game by us,” he said. “Got to learn from it. But just anytime you come up short it’s not a great feeling.”

After being rattled by the Rams in a 27-24 Monday night loss last season, struggling to throw down the field and being intercepted twice, Brady fared better against their defense this time. He was 41 of 55 for 432 yards and one touchdown without turning over the ball.

However, the pressure on Brady to carry the offense was better exemplified by his team-leading 14 yards rushing, scoring on a quarterback sneak in the third quarter.

Ronald Jones II had five carries for 11 yards, Leonard Fournette managed four attempts for 8 yards, and wide receiver Chris Godwin added a 2-yard touchdown run on a fly sweep. That was the extent of the rushing offense as Tampa Bay has failed to top 82 yards in a game this season.

Brady was able to use screens and other pass plays that could develop quickly to minimize the pressure early on. Eventually the one-dimensional approach buckled against Aaron Donald, Leonard Floyd and the rest of the Rams’ pass rush.

And while Brady had to methodically move the ball down the field, the Rams (3-0) were able to exploit injuries in the secondary to create explosive pass plays. Matthew Stafford had six throws of at least 20 yards, his most impressive and important coming when he found DeSean Jackson alone for a 75-yard touchdown on third-and-10 in the third quarter.

The Buccaneers didn’t have cornerback Sean Murphy-Bunting, who dislocated his elbow in the season opener against Dallas. They lost another starter when Jamel Dean sustained a knee injury in the first quarter, forcing inexperienced Dee Delaney into extended action against Los Angeles’ impressive array of receivers.

The lack of familiarity among the defensive backs allowed Jackson to get well behind safety Mike Edwards and give the Rams a 21-7 lead less than one minute into the second half, locking the Buccaneers into their pass-only offense.

“Busted coverage,” Arians said. “Just totally busted coverage. Lack of communication and they didn’t give the call to each other, and that’s what young guys do.”

Arians said the ineffective pass rush, which was without outside linebacker Jason Pierre-Paul because of hand and shoulder injuries, also contributed to allowing Stafford to throw for 343 yards and four touchdowns.

“Our pass rush didn’t get home today. And we needed to, we had to get home to help those guys (in the secondary) out. Didn’t get it done,” Arians said.

With their 10-game winning streak in the regular season and playoffs now over, Brady hopes the Buccaneers will use this defeat as a reminder of what it will take to return to SoFi Stadium next February to defend their Super Bowl title.