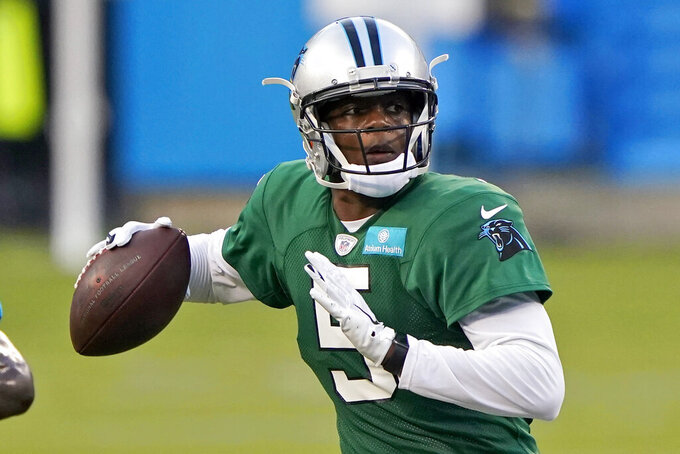 TAMPA, Fla. (AP) — Tom Brady and the Tampa Bay Buccaneers expect to be better against the Carolina Panthers.

The six-time Super Bowl champion struggled in his debut with his new team, was called out by his coach for throwing an interception that was returned for a touchdown, and only knows one way to move on from a rare season-opening loss for him.

“Every week’s a different challenge," Brady said. "I think it starts with great communication, understanding how to win the game, how to lose the game, being on the same page with my teammates so we can go execute.

“Obviously, to turn the ball over, makes it difficult to win. ... It’s a game of scoring points. You’ve got to figure out how to score more points than the other team,” he added, noting the Bucs (0-1) also need to eliminate penalties and other negative plays. “There’s been a lot of focus on those things this week.”

(For more in-depth coverage of the NFL, listen to the AP Pro Football Podcast apple.co/3iGiX8a )

There’s also been unwanted attention from the outside following coach Bruce Arians’ blunt assessment of the quarterback’s two-turnover performance in a 34-23 season-opening loss at New Orleans.

Arians shrugged off criticism of his decision to express his feelings publicly, saying the relationship between him and Brady is fine.

“So I don’t really care what other people think,” Arians said. “It’s just what he and I think.”

For his part, the quarterback didn’t say much.

The Panthers (0-1) expect the 43-year-old Brady to rebound and play well.

“I have the utmost, utmost, utmost respect for Tom Brady,” said first-year coach Matt Rhule, a 34-30 loser to the Las Vegas Raiders in his Carolina debut.

“To me, you (learn) about a quarterback when things go wrong,” Rhule said. “Some things went bad in the game, but Tom brought them back, got them within 10 points and still had a chance to win. ... We know we’ll have our hands full. No one’s better in bouncing back from a loss than Tom Brady.”

Brady will face a young Panthers defense that includes three rookie starters, including tackle Derrick Brown, end Yetur Gross-Matos and cornerback Troy Pride Jr. Carolina’s defense struggled in Week 1 against the Raiders, allowing Derek Carr to lead six scoring drives in the Raiders first eight possessions, three of which resulted in touchdowns. “We need to do a better job of tackling,” Rhule said. Getting off the field on third down was a struggle for the Panthers.

The Bucs are familiar with Teddy Bridgewater, though not necessarily the offensive system the quarterback is running in his first season with the Panthers.

With the coronavirus pandemic forcing cancellation of preseason games, the only tape of what Carolina is doing under Rhule and offensive coordinator Joe Brady was last week’s season opener.

Arians was impressed with what he saw.

“The coach and the quarterback have history in the same offense, so it’s not like they’re starting from scratch,” Arians said.

“Teddy is a very, very bright guy and has very few turnovers in his history. That part of it didn’t surprise me at all,” the Bucs coach added. “(Christian) McCaffrey never surprises me because if he gets a crack, he’s going. It all starts with him. I thought they did a good job of feeding him and Teddy played really well.”

Rhule said the Panthers want to get McCaffrey about “25 to 28 touches per game,” which was right along the game plan last week. However, Rhule also would like to work in No. 2 running back Mike Davis a little more against the Buccaneers. Rhule said because the Panthers only had three offensive possessions in the first half against the Raiders that was difficult to do.

Panthers left tackle Russell Okung said it has been a tough week for the offensive line knowing they failed to pick up 1 yard on a fourth down run late in the game on a potential winning drive in a 34-30 loss to the Raiders. Fullback Alex Armah was stopped cold on a run up the middle, turning the ball over on downs. “Honestly, the game comes down to fourth-and-1,” Okung said. “We did not do enough to win the game, especially when it was on our backs. ... We needed more. And we’ve got to figure out a way to win those situations.”