Brady the latest star to leave his longtime home 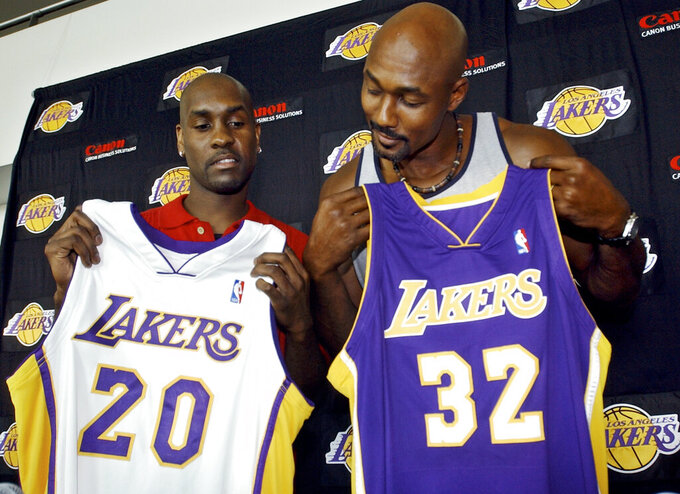 FILE - In this July 17, 2003 file photo Gary Payton, left, and Karl Malone display their new Los Angeles Lakers' jerseys during a news conference at the Staples Center in Los Angeles. The two players signed with the Lakers as free agents. Tom Brady’s departure from the New England Patriots on Tuesday, March 17, 2020, brings an end to one of the NFL’s most memorable eras. That’s happened plenty of times before in sports — a legendary star switching teams toward the end of his career. Malone was hoping for a triumphant ending when he signed with the Lakers in 2003 after 18 stellar seasons in Utah. But he came up just short in his quest for a title when the Lakers lost to Detroit in the 2004 NBA Finals. (AP Photo/Ric Francis, file)

Tom Brady’s departure from the New England Patriots brings an end to one of the NFL’s most memorable eras.

It also means fans should prepare for the sight of Brady in another uniform.

But that’s happened plenty of times before in sports — a legendary star switching teams toward the end of his career. Here are a few of the most prominent examples:

Joe Montana was in some ways a previous generation’s version of Brady — an iconic quarterback who was calm under pressure and always seemed to have his team in contention for a championship. He won four Super Bowl titles with San Francisco, but after elbow problems limited him for a couple seasons, the 49ers — who had the excellent Steve Young as a replacement — traded Montana to Kansas City. The Chiefs had Montana for two seasons and reached the AFC title game with him once.

The 49ers eventually moved on from Montana’s most famous receiving target as well. They released Jerry Rice in 2001. He went on to play four more seasons, surpassing 1,000 yards receiving twice with the Oakland Raiders.

GO FOR A RING

Brady’s departure may remind Boston fans of when the Bruins said goodbye to Ray Bourque, but the circumstances were different. After two decades in Boston without a Stanley Cup title, Bourque asked to be traded to a contender, and the Bruins obliged by sending the star defenseman to Colorado in 2000. Bourque and the Avalanche won the Cup in 2001, and he brought it back to Boston for a celebration at City Hall Plaza. At that point, Boston was happy to celebrate a surrogate championship. The Red Sox were still stuck in their decades-long drought, and Brady’s first Super Bowl wasn’t until months later.

Karl Malone was hoping for a triumphant ending when he signed with the Los Angeles Lakers in 2003 after 18 stellar seasons in Utah. But he came up just short in his quest for a title when the Lakers lost to Detroit in the 2004 NBA Finals.

Hank Aaron spent most of his career with the Braves — in both Milwaukee and Atlanta. He ended up back in Milwaukee when the Braves traded him to the Brewers after the 1974 season. Aaron played two seasons for the Brewers, and although his offensive numbers dipped considerably, he was an All-Star in 1975.

Babe Ruth started his career with the Boston Red Sox, but he became one of the game’s greatest sluggers with the New York Yankees. Ruth's final season was as a member of the Boston Braves in 1935. Ruth was a shell of his former self, but he did hit the last three homers of his career in one game at Pittsburgh’s Forbes Field.

For years, Willie Mays trailed only Aaron and Ruth on the career home run list. Mays hit many of his 660 homers with the Giants in New York and San Francisco. The Mets brought him back to New York when they traded for him in 1972. He finished his career there in 1973, hitting just .211.

It’s not really the same as Brady’s situation — because there were some gap years in between — but it certainly was strange seeing Michael Jordan in a Washington uniform when he began playing again in 2001. Jordan had retired after winning a sixth NBA title with the Chicago Bulls in 1998, but he became president of basketball operations in Washington and eventually returned to the court to play for the Wizards for two seasons.

Gordie Howe also came out of retirement. The longtime star of the Detroit Red Wings returned to play at age 45 with his sons Mark and Marty in the WHA. In 1973-74, his first season in the WHA, Howe was named league MVP and led the Houston Aeros to the championship. Howe remained in the WHA for a while and even returned to the NHL, playing for the Hartford Whalers in the 1979-80 season.

There were some similarities between Peyton Manning’s departure from Indianapolis and Montana’s move to Kansas City. Manning missed the whole 2011 season for Indianapolis because of neck issues, and the Colts had a chance to take Andrew Luck with the top pick in the next draft. Manning wasn’t traded like Montana. He was cut, and he then joined the Denver Broncos and eventually won a Super Bowl with them.

Brett Favre’s run in Green Bay ended shortly before the 2008 season when he was traded to the New York Jets. The Packers moved on with Aaron Rodgers, and after one season with the Jets, Favre returned to Green Bay’s division, playing his final two seasons with the Minnesota Vikings.

Coaches and managers also develop bonds with certain organizations and cities, but occasionally they end up in new spots toward the end of their careers. Vince Lombardi won two Super Bowls with Green Bay, but after a season away from coaching, he went to Washington and was the coach there for one season in 1969.

Casey Stengel managed four teams, most notably the New York Yankees during a stretch when they won the World Series seven times in 10 years. He was fired after a loss in the 1960 World Series but resurfaced as the manager of the expansion Mets in 1962. Stengel’s charming wit became a big part of those early years for the Mets, when victories were rare.