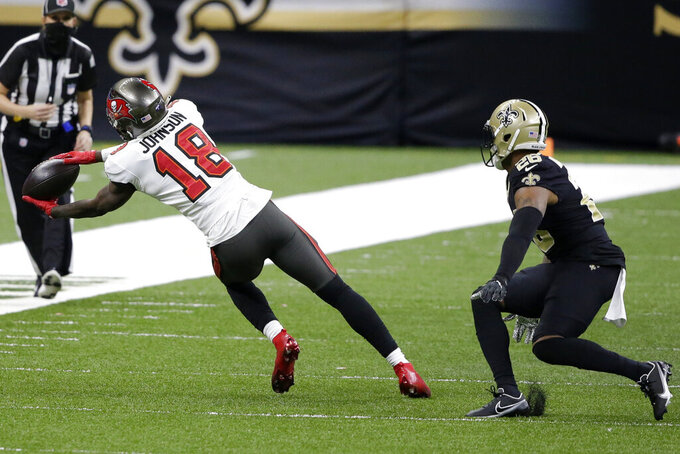 TAMPA, Fla. (AP) — When Tom Brady drops back in the pocket he has a bunch of options to attack opposing defenses, including a talented collection of receivers that's possibly the best he's played with in more than a decade — maybe even his entire career.

For starters, Mike Evans is the only player in NFL history to begin a career with seven consecutive seasons with at least 1,000 yards receiving, Chris Godwin is a prime target with exceptional hands, and Rob Gronkowski is one of the most prolific tight ends of all time.

Don't forget Antonio Brown, who joined the Tampa Bay Buccaneers at midseason and has contributed to the team’s run to Sunday’s NFC championship game at Green Bay. Tight end Cameron Brate has been a trusted and dependable playmaker for Brady, too.

Then there’s Scotty Miller and Tyler Johnson, a couple of late-round draft picks roughly half the age of the 43-year-old quarterback.

Johnson’s acrobatic 15-yard catch on third-and-11 and Miller’s 29-yard reception on third-and-5 helped Brady position the Bucs for a fourth-quarter field goal that put Tampa Bay ahead for good in last week’s 30-20 divisional-round win over the New Orleans Saints.

“He sees those guys work so hard on the practice field and he’s got a great rapport with all of them, especially Scotty,” coach Bruce Arians said.

Throw in running back Ronald Jones — as well as Leonard Fournette and LeSean McCoy, a pair of veterans brought in to bolster depth at the position — and the Bucs have assembled the best group of playmakers Brady has had to work with since 2007, when he was teamed with Hall of Fame receiver Randy Moss in New England.

Without the benefit of normal offseason workouts or preseason games because of the coronavirus pandemic, Brady and his receivers gradually developed a close relationship and Tampa Bay’s offense has really taken off during the six-game winning streak the Bucs (13-5) will take to Lambeau Field this weekend.

“It’s a complex game. There’s a lot of moving parts, there’s a lot of coordination involved between a lot of different positions. .... The more that I’ve been around Mike, Chris, Antonio, Scooter (Miller), Tyler, Mick (Jaydon Mickens) — the better it gets,” Brady said.

“The tight end position, I’ve been around Gronk for a long time. I know exactly what he’s thinking, how he looks. Cam is a pretty easy guy to get up to speed with, too. We’re just going to keep trying to make improvements.”

Brady threw for just 199 yards a week ago, yet showed how much trust he's developed in his playmakers across the board. He spread 18 completions against the Saints among nine different receivers, none of whom were targeted more than seven times.

Evans’ only reception went for a 3-yard touchdown. Brown’s lone catch produced a first down, as did the key plays Miller and Johnson delivered in the fourth quarter. One of Fournette’s team-leading five receptions out of the backfield produced a 6-yard TD that erased a 20-13 deficit in the third quarter.

The speedy Miller, 23, was a sixth-round draft pick out of Bowling Green in 2019. Johnson, a 22-year-old rookie from Minnesota, was a fifth-rounder who only had 12 receptions during the regular season.

The young receivers very well may be called on again against the Packers, with Brown listed day to day with a knee injury.

“That’s what it’s all about. You get your opportunities, you’ve got to make the best of them,” Arians said.

“You don’t know when they’re coming, and (last week) Scotty jumped out there. It was really a play designed for Antonio, but Scotty ran a great route. Tyler makes a great catch,” Arians added. “It’s everybody just doing their job. ... All we’ve got to do is do our job. We’re good enough to beat anybody.”