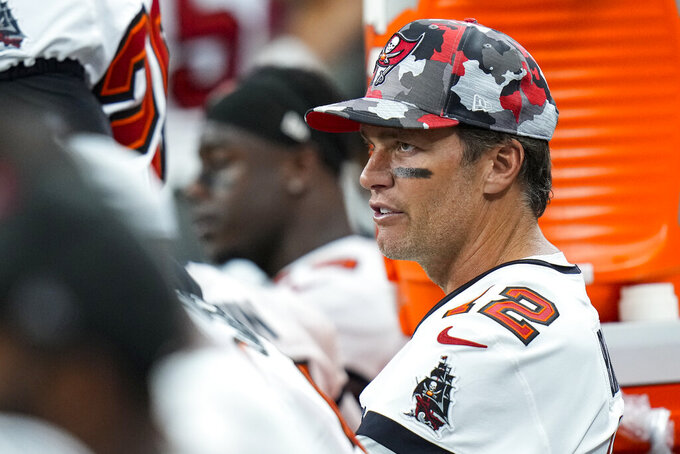 Tampa Bay Buccaneers quarterback Tom Brady (12) sits on the bench in the second half of an NFL preseason football game against the Indianapolis Colts in Indianapolis, Saturday, Aug. 27, 2022. (AP Photo/AJ Mast)

OPENING LINE: Buccaneers by 2 1/2, according to FanDuel SportsBook.

TURNOVER DIFFERENTIAL: Buccaneers plus-10; Cowboys plus-14.

BUCCANEERS PLAYER TO WATCH: WR Julio Jones makes his debut with the Bucs after spending the first 11 seasons of his career with Atlanta and Tennessee. In addition to 61 touchdown receptions, he ranks first among active NFL players with 879 catches and 13,330 yards receiving. He joins an already formidable group of playmakers at Tom Brady’s disposal, including WRs Mike Evans and Chris Godwin. Injuries limited Jones' production the past two seasons with the Falcons and Titans, however the Bucs are confident a healthy Jones can be a major asset in 2022.

COWBOYS PLAYER TO WATCH: WR CeeDee Lamb is now Dak Prescott's unquestioned top option after the offseason trade of Amari Cooper to Cleveland in a cost-cutting move. The Buccaneers are very difficult to run against, and the Cowboys basically gave up trying in last year's opener while moving effectively with 403 yards passing and three touchdowns from Prescott. The group behind Lamb is unproven, so the burden is on the third-year player to show he can be the No. 1 guy despite the double teams and other tricks that are certainly headed his way.

KEY MATCHUP: Tampa Bay QB Tom Brady vs. Dallas CB Trevon Diggs. The first of Diggs' 11 interceptions last season came against Brady in the opener, and started a streak of at least one pick in each of the first six games. It was the first such streak in the NFL since 2003. Logic says he'll draw Evans most of the time, but the deep receiving group for the Bucs could mean some other matchups.

KEY INJURIES: Both offensive lines face significant questions, thanks in part to injuries. The Bucs had the unexpected retirement of Bucs G Ali Marpet and injuries that knocked C Ryan Jensen and LG Aaron Stinnie out of the lineup during training camp. Second-year pro Robert Hainsey has stepped in at center, and rookie Luke Goedeke will enter the season as the starter at left guard. The Cowboys are likely to be without eight-time Pro Bowl LT Tyron Smith until at least December because of a torn hamstring. Rookie first-round pick Tyler Smith will start in his place. LG Connor McGovern replaces Connor Williams, who went to Miami in free agency. Undrafted third-year player Terence Steele is the permanent, instead of temporary, replacement at RT for La'el Collins, who was released in a cost-cutting move. Cowboys WR Michael Gallup (torn ACL in January) will miss at least the opener.

SERIES NOTES: Brady is 6-0 with 14 touchdown passes in six games against the Cowboys, including a 379-yard, four-TD performance a year ago, when Brady led the Bucs on a drive to Ryan Succop's game-winning field goal. ... Dallas is 12-1 at home against Tampa Bay, including 3-0 at AT&T Stadium.

STATS AND STUFF: Tampa Bay and Dallas had the two best offenses in the NFL in the regular season. The Cowboys were first and the Bucs second in total yards and scoring, while Tampa Bay was first and Dallas second in passing yards. ... Brady is coming off throwing for a career- and league-high 5,316 yards in 2021 at age 44. He also led the league in completions, attempts and TD passes (43). ... Brady (eighth at 96.7) and Prescott (fifth at 98.7) are among the top eight in passer rating in NFL history. Seven of those eight are still active. ... Evans is the only player in NFL history to begin a career with eight consecutive seasons with at least 1,000 yards receiving. He had 14 TD receptions last year, second in the league to Cooper Kupp’s 16. ... Godwin had 98 catches for 1,103 yards before suffering a season-ending knee injury last December. He’s practicing — and ahead of schedule in his rehab from surgery — however coach Todd Bowles has yet to make an announcement on his status for Sunday night. ... The Bucs had the third-best run defense in the NFL in 2021 after leading the league the previous two seasons. ... OLB Shaquil Barrett had 10 sacks last season, including one of Prescott. He has 37 1/2 since 2019, fourth in the NFL. ... Coach Mike McCarthy is 0-2 in Dallas openers after going 9-4 in Green Bay. Dave Campo (2000-02) is the only Dallas coach to lose his first three openers. Campo didn't get a fourth opener. ... Prescott has completed 79% of his passes (94 of 119) in three games against the Buccaneers. It's the highest percentage for a quarterback with a minimum of 100 attempts against a single opponent in NFL history. ... RB Ezekiel Elliott has just one 100-yard game in six openers (104 in 19-3 win over New York Giants in 2017). The two-time rushing champ was held to 33 yards on 11 carries against the Bucs last year. ... Lamb had 153 catches in his first two seasons, the most in club history. He's the first Dallas receiver with at least 1,000 scrimmage yards each of his first two seasons. ... RG Zack Martin is the only active lineman with more Pro Bowls (seven) than holding penalties (five). Martin also has been selected as an All-Pro five times in his eight seasons. ... LB Micah Parsons was the NFL Defensive Rookie of the Year after leading first-year players with 13 sacks. It was the league's third-best rookie sacks total since the stat became official in 1982. ... Diggs' 11 interceptions were the most in the NFL since Everson Walls set the Dallas record with 11 as a rookie in 1981.

FANTASY TIP: The teams combined for 782 yards passing and seven touchdowns compared to 112 yards rushing with no scores in last season's opener. There were 11 pass plays of at least 20 yards and only two runs of more than 10 yards, one of which was on a desperation final play after the go-ahead field goal. The safe play is to stick with quarterbacks and receivers from these rosters.