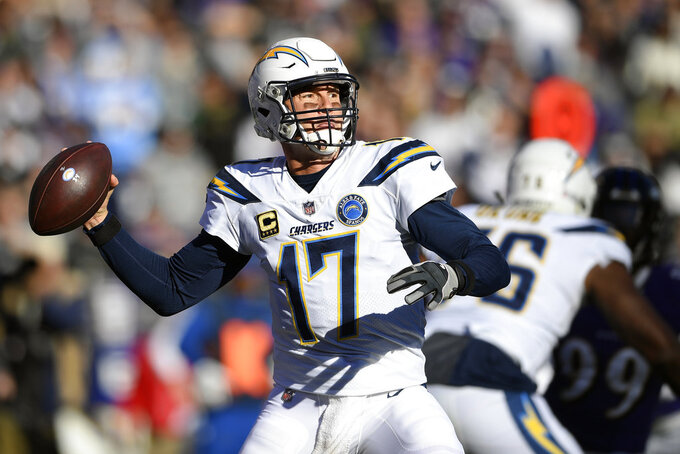 But as the Patriots quarterback began his preparations for Sunday's divisional playoff game with the Chargers, he said he only had to think back to their AFC championship game matchup during the 2007 season to remind himself of Rivers' toughness.

"I mean the guy played with a torn ACL. We played in 10-degree weather and he was still firing dimes out there," Brady said Monday on Boston's WEEI radio. "So, the guy's got all of the confidence in the world. It makes for a great matchup."

New England won that day and Brady enters Sunday's game with a 7-0 record as a starter against Rivers, including 4-0 in games played in Foxborough and 2-0 in the playoffs.

Rivers earned his lone victory against New England during the 2008 regular season when the Chargers were still in San Diego. Brady was sidelined for that game by a knee injury he sustained in the Patriots' season opener and Matt Cassel started in his place.

New England has won four straight games in the series since then , with the Chargers getting within a touchdown when they lost 23-20 at home in 2010. The Patriots beat the Chargers 21-13 last season.

History aside, Brady said it doesn't diminish his respect for Rivers' abilities on the field. At age 37, Rivers ended the regular season by throwing for at least 4,000 yards for the sixth straight season. He also posted at least 30 passing touchdowns for the sixth time since becoming the Chargers' starter in 2006.

Like Brady he's also been incredibly durable during his career, not missing a regular-season start for 13 consecutive seasons.

"He's a great leader. He's a great passer of the football," Brady said. "He's kind of like me. He wants the ball out of his hands. He kind of wants to be able to anticipate coverages. He's got really a great group of skill players — backs, tight ends, receivers. They're playing as well as any offense that's played all season. He's having an incredible year."

So, too, is Los Angeles' defense.

The Chargers ended the regular season ranked eighth in the NFL allowing 21 points per game, while allowing only 228 yards passing per game (ranked ninth). They beat the Ravens 23-17 in the wild-card round, but led 23-3 in the fourth quarter before allowing a pair of late touchdowns.

It's why Brady said his preparations for the Chargers started immediately after the conclusion of that game.

"I was watching film all night," Brady said.

Rivers could also have another target to throw to this time around against New England.

On Monday, the Chargers added tight end Hunter Henry to the active roster, less than eight months after he suffered a knee injury during an offseason workout in May. He had surgery two weeks later and had been on the physically unable to perform list since the start of training camp.

"It gives them another weapon with a great quarterback who can use all of his weapons at all of the positions," Patriots coach Bill Belichick said. "It's another brick on the pile that we'll have to deal with."

While Brady won't have any new personnel to throw to, he did spend New England's bye week trying to fine-tune his own skills by working out with personal throwing coach Tom House.

"I had some extra time and thought it would be a good thing to do," Brady said. "Football is all about techniques and fundamentals. ... In the bigger games you need to be as sound as possible."

He said he's expecting "a great test" from the Chargers.

"We've earned the right to be playing in this weekend's game and we've got a great opportunity," Brady said. "We've got to go out and have our best game of the year."