Breaking down players selected in 1st round of NFL draft 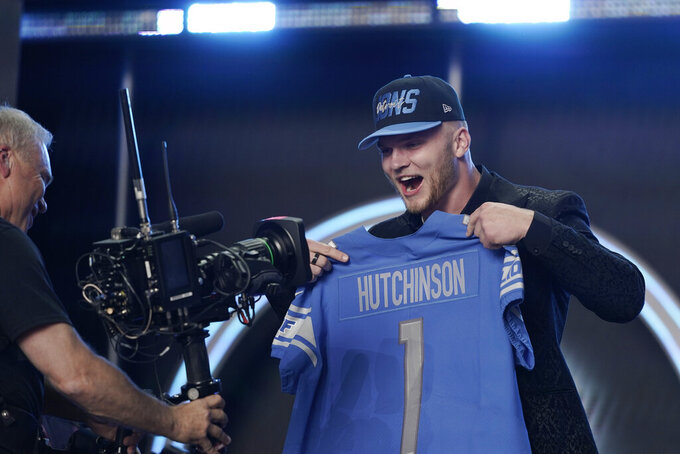 The players chosen in the first round Thursday of the NFL draft:

Breakdown: Speed and athleticism for his size and build are prototypical and he could probably add some weight without losing much of what makes him special. Pass-rush technique needs work.

Fact: One-year starter whose production (13 tackles for loss and 9 1/2 sacks) was just OK playing as part of a deep rotation at Georgia.

Notable: The last team to pick No. 1 overall in consecutive seasons was Cleveland, which picked an edge rusher (Myles Garrett) in 2017 and a quarterback (Baker Mayfield) in 2018). The Jags went QB (Trevor Lawrence) and then pass rusher in Walker.

Breakdown: Relentless and efficient pass rusher with a good combination of technique and an assortment of moves. Overall athleticism is a notch below some elite pass rushers who have gone in the top five in recent years like the Bosa brothers.

Notable: The last time the Lions picked a player from Michigan in the first round was OL Jeff Backus at 18th in 2001.

Breakdown: Strong man-to-man technique. Plays balanced to mirror receivers. Can get lost in zone coverage and in run support.

Fact: Stingley was an All-American as a freshman but injuries (foot in 2021) and regression by the rest of the defense undercut his next two seasons.

Breakdown: Tall, long-armed and fast. Moves his lanky frame smoothly and plays aggressively at the line of scrimmage. Not a lot of power in his game and he can get grabby, but the corner nicknamed Sauce was the definition of lockdown.

Fact: Did not allow a TD reception in his three-year college career.

Notable: Gardner is the highest drafted player ever from Cincinnati and the first cornerback taken in the first round by the Jets since Dee Milliner (No. 9) in 2013.

Breakdown: Pounces past blockers to make plays in the backfield with uncanny burst and length. Long, lean build doesn’t lend itself to adding weight.

Fact: Former five-star recruit seemed destined to be a first overall draft pick after freshman season, but between injuries and a shortened pandemic season he never put together a fully dominant year.

Notable: Giants had not drafted a defensive end/edge rusher in the first round since taking Jason Pierre-Paul (No. 15) in 2010.

Breakdown: Light on his feet and able to lock up defenders with his long arms. Can get a little too aggressive at times — 10 penalties in his career — but it comes with a desirable toughness. Scores high marks for leadership and likability off the field.

Notable: Ekwonu is the first offensive lineman taken in the first round by Carolina since Jeff Otah (No. 19) in 2008.

Breakdown: Remarkable combination of size and explosive athleticism. Balance and sustaining blocks need to become more consistent, but as long he keeps his weight in check there is a lot to like.

Fact: Started 40 games and missed only one in his three-year career, which ended as an All-American.

Notable: Alabama has had at least one first-round pick for 14 consecutive years, tying the record set by Miami from 1995-2008.

Fact: Was on the way toward Heisman Trophy consideration in 2021 before a right ankle fracture cut his season short.

Breakdown: Good size and length, Cross plays with balance and patience as a pass blocker. Could use some bulk and his run blocking will need development after playing in pass-happy offense.

Fact: Blue-chip prospect out of Mississippi elected to stay in his home state over offers from Southern California and Florida State.

Notable: Cross is Mississippi State’s first top-10 pick since the Eagles took RB Michael Haddix at No. 8 in 1983.

Breakdown: Highly skilled at tracking the flight of the ball. Works the sideline adeptly with excellent footwork and has speed and precision to run away from defenders. On the lean side.

Fact: Playing with other star receivers limited his production, but he caught 23 touchdown passes in 33 career games with 19 starts.

Notable: The last time the Jets took a receiver in the first round was Santana Moss in 2001

Breakdown: Quickness to win off the line of scrimmage and speed to get separation in the open the field. Like his teammate, Wilson, he lacks power, but he’s hard to cover and catches pretty much everything.

Notable: Last time the Saints selected an Ohio State receiver was Michael Thomas with in the second round (47th overall) in 2016. This is the third straight season two receivers from the same school went in the first round. Alabama did it in both 2020 and 2021.

Breakdown: Dynamic speed burner who became the top deep threat in the country last season (19.9 yards per catch). Only one season as a starter and it ended with a torn knee ligament in the national championship game.

Fact: Transferred to Alabama from Ohio State, where he played behind Wilson and Olave for two years.

Notable: Six Alabama wide receivers have been selected in the first round of the last five drafts.

Breakdown: Massive anchor in the middle of a defense, but with uncommon athleticism and speed (4.78 in the 40 at the combine). Questions about whether he can be the type of pass rusher that makes him a high-snap-count interior lineman.

Fact: All-American who won the Bednarik Award as the nation’s best defensive player and Outland Trophy as the top lineman last season.

Notable: Longtime star Fletcher Cox was the last defensive tackle selected by the Eagles in the first round in 2012 at No. 12.

Breakdown: Rangy and dynamic athlete who tends to show up in places that offenses don’t anticipate. His 40 times (4.59 at the combine) were underwhelming and might limit him in some defenses, but he has a knack for game-changing plays.

Fact: Was limited to seven games in 2021 because of a right knee injury that did not require surgery.

Breakdown: Powerful and versatile lineman who played four different positions in his time with the Aggies. A punishing run blocker who has struggled some with recognition in pass blocking.

Fact: Father was an offensive lineman at Grambling and his mother played volleyball at UCLA.

Notable: The Texans only selected a player in the first round once in the previous four drafts. It was OT Tytus Howard at No. 23 in 2019.

Breakdown: Undersized, but a darting route runner with reliable hands and elusiveness after the catch or as a kick returner.

Fact: Moved into the starting lineup late in his freshman season and finished with 183 catches, second in school history.

Notable: The last Penn State receiver selected in the first round was Bryant Johnson by the Cardinals in 2003 at No. 17.

Breakdown: Durable prospect who combines long arms, quick feet and good awareness. Powerful opponents can get him off balance, but Johnson is about as safe a bet as there is in the draft.

Fact: Transferred from Davidson to Boston College where he became a three-year starter, taking the extra year of eligibility to become a fifth-year senior with 58 college games.

Notable: Second straight year the Chargers picked an offensive lineman in the first round (OT Rashawn Slater, No. 13).

Breakdown: Another big, physical receiver who outmuscles defenders for the ball and breaks tackles after he gets it. A developing route runner who did lot of damage on quick throws near the line of scrimmage.

Notable: The Titans traded star WR A.J. Brown to Philadelphia to move up and take a player with similar measurables.

Breakdown: Salty competitor with great size and enough of athleticism to provide promise that he will be able to stay in front of NFL speed and quickness off the edge. But the whole game needs refinement.

Fact: Did not have any Division I scholarship offers until his senior high school season.

Breakdown: Throws with good anticipation and seems to process quickly. Good athlete with a solid arm. This is not a draft with elite QB prospects, but Pickett is probably the safest bet to become a productive starter.

Notable: Steelers take a quarterback in the first round for the first time since they selected Ben Roethlisberger (No. 11) in 2004. Big Ben retired after last season.

Breakdown: The latest in a recent line of tough and sound Washington cornerbacks. Lacking length, had only two interceptions in 28 career games (26 starts).

Notable: Chiefs took a cornerback in the first round for the first time since 2015, when they took Marcus Peters from Washington at No. 18.

Breakdown: Walker is the antithesis of teammate Dean. Ideal size with all the measurables, but not nearly as instinctive and consistent.

Fact: Another Georgia defender whose snaps and starts were limited playing on a deep and talented roster. Walker only become a starter as a senior.

Notable: Walker is the second consecutive Georgia player taken in the first round by the Packers, joining CB Eric Stokes (No. 29) last year.

Breakdown: Big and fast, but played sloppily in 2021.

Fact: Father Abram Elam played seven seasons in the NFL. Nephew of Matt Elam, who also played at Florida and in the NFL.

Breakdown: Powerful and long and plays with a mean streak. Technique needs smoothing out.

Fact: Started both of his two full seasons at Tulsa after redshirting as a freshman.

Notable: For the second straight year, the first player taken from an FBS school from the state of Oklahoma is from Tulsa. The Cardinals took LB Zaven Collins at No. 16 last year.

Breakdown: Timing, consistency, technique, effort and quickness rate about as well as you can for the position. Makes up for what he lacks in size by being a fierce competitor.

Fact: Moved from defensive line to center as a redshirt freshman and then started 35 games over his last three seasons.

Notable: Iowa has had three centers drafted seven years, with Linderbaum joining James Daniels (second to Chicago in 2018) and Austin Blythe (seventh round to Indianapolis in 2016).

Breakdown: Plays with power, leverage and great effort, making him effective rushing the passer and against the run. After he only played full time one season, Johnson’s technique and fundamentals are underdeveloped.

Fact: With a fifth year of eligibility, Johnson transferred from Georgia to Florida State in 2021 and became the Atlantic Coast Conference defensive player of the year.

Breakdown: Aggressive, hard-hitting and versatile linebacker who should be able to fill multiple spots in multiple schemes. Recognition and discipline needs some work.

Fact: All-American and Pac-12 defensive player of the year in 2021 had 43 tackles for loss in 33 career games.

Notable: Lloyd is the first Utah player selected in the first round since 2017 when Denver took Garett Bolles at No. 20.

Breakdown: Disruptive with good quickness to play two gaps but could use more power in his play.

Fact: Returned for a fifth college season in 2021 (including a year at junior college) and developed into an All-Southeastern Conference player and second-team All-American.

Notable: The Packers have selected one offensive player in the first round in the last 11 drafts — QB Jordan Love in 2020.

Breakdown: Tough players who plays low with strong hands, but his frame is longer and leaner than typical for a guard.

Notable: Patriots selected a guard in the first round for the first time since Logan Mankins (No. 32) in 2005.

Breakdown: Quick off the ball with strong hands to knock blockers off balance, but arms shorter than ideal and needs to finish more plays after 14 1/2 career sacks in 27 games.

Fact: Moved to the United States in eighth grade from Greece and started playing football after being an elite youth water polo player.

Notable: Chiefs had two picks in the first round for the first time since 2008 when they took DT Glenn Dorsey (No. 5) and OL Branden Albert (No. 15).

Notable: First defensive player selected in the first round by the Bengals since CB William Jackson at No. 24 in 2016.

Breakdown: Covers a lot of ground in run support and plays with good fundamentals, but coverage skills need work.

Fact: Defensive player of the game in Georgia’s national championship victory against Alabama.

Notable: Cine was the fifth Georgia defensive player taken in the first round to set a record for the common draft era for one school. The previous record of four was set by Miami in 2004 and matched by Florida State in 2006.