Brees doesn't want Saints' playoff run to be about him 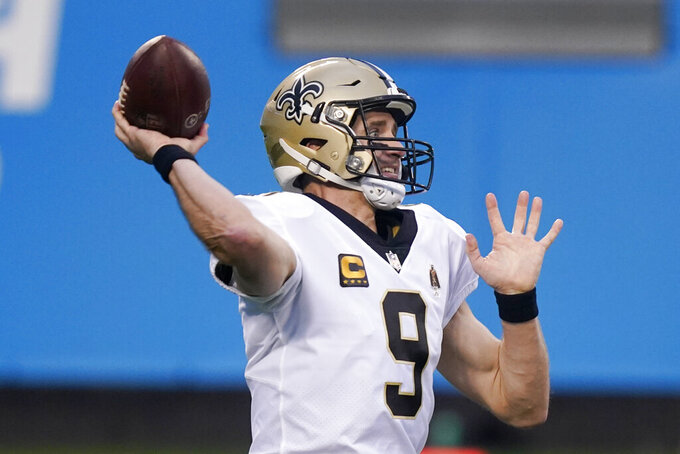 NEW ORLEANS (AP) — Drew Brees doesn’t want the Saints to make their upcoming playoff run about him, even if the record-setting quarterback’s career could end on any given weekend.

Brees, who turns 42 on Jan. 15 and is the NFL’s all-time leading passer, hasn’t committed to playing another season.

His extraordinary 20 seasons as an NFL player could end with either the next Saints loss, or perhaps, a Super Bowl victory. But Brees bristles at the notion that speculation about the end of his playing days should overshadow the story of the Saints’ 2020 season or the club's preparation for the single-elimination NFL postseason.

It sounds like coach Sean Payton and Brees’ teammates are in lockstep on that front as they prepare for their playoff opener Sunday against the Chicago Bears in the Superdome.

Payton went so far as to assert that a potentially imminent end to Brees' career is, “The last thing on anyone’s mind.”

“Right now, it’s all the things necessary to beat Chicago,” Payton continued. “Shoot, there will be a number of players, coaches, personnel -- there will be changes every year.”

But Brees has been a constant in New Orleans since 2006, a time when lingering devastation from Hurricane Katrina, which had struck less than a year earlier, remained commonplace across the cityscape.

The Saints had gone 3-13 the season during their displacement by the storm in 2005. But Brees quickly led a storybook turnaround in the team's first season back in New Orleans and the Superdome. The Saints made the playoffs and advanced to the NFC title game at the end of the 2006 season. That captivating run ended against the Bears in Chicago.

What followed during the next decade included the city’s lone major pro sports championship and more than a few historically significant moments in the Superdome.

Brees was the Super Bowl MVP when the Saints capped their 2009 season with a championship. Brees later obliterated franchise passing records and eventually began eclipsing the most significant passing marks in NFL history.

He has passed for 80,358 yards in the regular season (postseason statistics do not count toward NFL career totals or records), making Brees the first NFL QB to pass for 80,000 yards. His 571 touchdowns rank second behind only Tom Brady’s 581.

All the while, Brees dedicated himself to supporting New Orleans with millions of dollars in charitable endeavors, opened businesses in the area, took part in national campaigns to promote the city’s tourism industry and even started a network of flag football leagues, including one in which he coaches his sons in New Orleans.

All four of Brees’ children were born during his stint with the Saints, growing up in a renovated, historic home near Audubon Park. Brees has been known to frequent the park, where he built a playground, with his family as a typical resident would.

“No one has ever scored higher as far as their combination of athletic achievement and involvement in a community,” said political pundit, Louisiana native and New Orleans resident James Carville, asserting that Brees is to New Orleans what Ted Williams was to Boston and Michael Jordan to Chicago.

“In more ways than one, he’s arguably the most significant New Orleanian of the 21st century,” Carville added.

Be that as it may, Saints players who spoke after practice on Wednesday sounded intent on honoring Brees’ wish to keep the focus on the team.

“No one knows Drew’s future and what that holds,” said left tackle Terron Armstead, who has been Brees' teammate since 2013. “So, we’re just going to take this thing one game at a time, try to execute our game plan to the best of our ability and be victorious week after week.”

If Brees were looking for reasons to retire, he could start with recent injuries. He missed five games with a thumb injury in 2019. He missed four games with rib and lung injuries this season.

He also has a handsomely paid job as an analyst on NBC football broadcasts awaiting him, and it would be hard to blame a father for wanting to be more involved in the lives of his children, although they seem to enjoy their father's football career.

Brees has spoken this season of being on “borrowed time." And Payton suggested in a radio interview last spring, before ultimately back-tracking, that Brees would retire after this season.

Brees doesn't pass for as many yards as he used to. He eclipsed the 5,000-yard mark in four seasons, but this season had 2,942, his second straight season with fewer than 3,000.

Still, his efficiency has remained high.

This season, Brees completed 70.5% of his passes, which compares favorably to most QBs except himself. He finished the 2018 season with a record 74.4 % completion rate, which last season dropped only slightly to 74.3%.

Technically, Brees is under contract through next season after signing a two-year, $50 million deal last offseason. But he doesn’t have to play it out.

“You know what? Honestly, I’ve played the last four seasons in a row as if it was my last," Brees said. "So, as I sit here, right now, my approach is very much the same.”