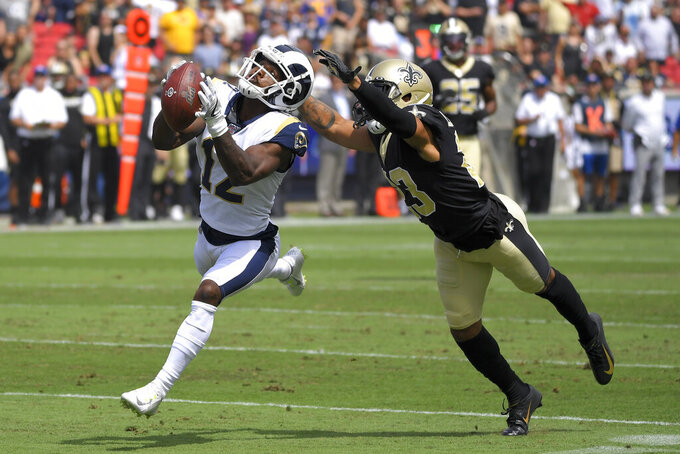 Jared Goff and the Los Angeles Rams didn't waste the opportunity created by Brees' absence to beat the Saints again. And with no help from a no-call this time.

Goff passed for 283 yards and a touchdown and rushed for another score, and the Rams stopped New Orleans from scoring an offensive touchdown for the first time since 2016 during Los Angeles' 27-9 victory Sunday.

A strong performance by the Rams' defense, an impressive second half from Goff's offense, and another officiating decision that hurt the Saints were all overshadowed by Brees' departure late in the first quarter.

"I told him I'm hoping for the best," Goff said of his postgame chat with Brees. "He's a great player for this league, a face of the league, and somebody we need in the league."

Brees' throwing hand collided with Aaron Donald's outstretched hand while he threw an incompletion on the Saints' second drive, and the NFL's career leader in yards passing spent the afternoon on the Coliseum sideline with his thumb heavily wrapped. Brees will see a hand specialist Sunday night, he said.

"There is only so much you can do here as far as a doctor seeing it on the sideline," Brees said. "Hoping it is not too significant."

Teddy Bridgewater went 17 of 30 for 165 yards in solid relief, while Alvin Kamara rushed for just 45 yards for the Saints (1-1), who seemed understandably discombobulated without their longtime quarterback — although the Rams' defense deserves plenty of credit as well.

Brees' absence "really didn't change anything at all for us," Rams pass rusher Dante Fowler said. "We were doing a good job before he got hurt. Everybody was on top of their game."

New Orleans didn't score an offensive touchdown for only the fourth time in 13-plus seasons under coach Sean Payton, who got a lengthy contract extension before the game.

"It is going to be a hard film to watch for guys," Payton said. "We got whipped up front."

Todd Gurley rushed for 63 yards and scored his first touchdown of the season late in the third quarter of this rematch of the Rams' 26-23 overtime win in New Orleans last January. That game turned on the infamous uncalled pass interference late in regulation by Rams cornerback Nickell Robey-Coleman, who had six tackles in the rematch.

"Every win is a big win, but today was a very important win," Robey-Coleman said. "It was a win that basically just closed all the chatter and the naysaying."

This one also contained early refereeing drama that left the Saints steamed: New Orleans' Cameron Jordan had a long fumble return for a touchdown wiped out in the second quarter. The play initially was ruled an incomplete pass before video review determined Goff had fumbled, but Jordan's long return didn't count because officials had blown the play dead.

Jordan was still furious after the game, even referring to the refs as "the Foot Locker" and saying certain members of the officiating crew "were maybe in their prime a decade ago."

"If Drew is down, it's on the defense," Jordan added. "I take it upon me. I don't know how many times we hit Jared Goff, but it wasn't enough. We've got to create more turnovers."

The Saints were hampered by 11 penalties for 87 yards, while the Rams' offense recovered from a slow start to make three straight touchdown drives in the second half.

But this matchup between two of the most prolific offenses in NFL history was definitely not a fireworks show, between Brees' absence and the inconsistent performance of Los Angeles coach Sean McVay's offense. The Rams failed to score a touchdown in the first half for only the third time in McVay's tenure.

KUPP RUNNETH OVER EVERYBODY

Shortly after Brandin Cooks caught a TD pass, Cooper Kupp made the play of the game with a spectacular 67-yard catch-and-run in the fourth quarter. Goff scored after Kupp was ruled down at the 1 by video review.

"It was like something you only see in a football movie," Cooks said with a laugh.

The Rams lost two offensive starters: right guard Austin Blythe injured his ankle in the first half, and tight end Tyler Higbee incurred a chest injury early in the second half.

Donald missed part of the first half with a back injury, but the two-time Defensive Player of the Year returned.

The game was the Rams' final home opener at the 96-year-old Coliseum: They'll move into SoFi Stadium in Inglewood next season. The Rams and Chargers unveiled the name of their multibillion-dollar complex before the game.

Saints: Staying on the West Coast this week to face the Seattle Seahawks next Sunday.

Rams: At the Cleveland Browns next Sunday.