Brees-led Saints offense at its healthiest since Week 2 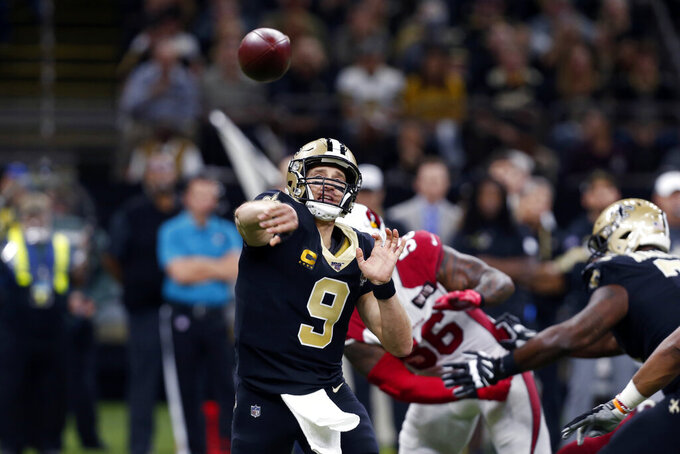 METAIRIE, La. (AP) — While Saints quarterback Drew Brees plans to again wear a plastic splint on his surgically repaired thumb against the Atlanta Falcons this Sunday, chances are he'll be on the field with an offense that is as healthy as it's been since the quarterback was injured early in a Week 2 loss to the Rams in Los Angeles.

Tight end Jared Cook, whose injured ankle kept him out of two games, including Brees' first game back from thumb surgery in Week 8, fully participated in practice on Wednesday, as did No. 3 receiver Tre'Quan Smith, who has not had a catch since injuring his ankle in Week 2.

Dynamic running back Alvin Kamara, who has missed two games with ankle and knee injuries, also practiced on a limited basis, and teammates sounded optimistic that he looked close to being ready.

"Hopefully we'll have everybody back this week and just continue to build on what we've done up to this point," Brees said.

Although backup QB Teddy Bridgewater gained folk-hero status from going 5-0 as a fill-in starter during what is now a six-game winning streak for the 7-1 Saints, offensive productivity spiked considerably when Brees returned against Arizona in Week 8, going 34 of 43 for 373 yards and three touchdowns without Kamara, Cook or Smith in the lineup.

"It was great to be able to come back the week before the bye and get a game under my belt," Brees said. "I felt like I was shaking off a little bit of rust during the course of that game, honestly, but hopefully we can just continue to build and keep the confidence and the momentum going."

In his two full games, Brees has averaged 371.5 passing yards and thrown for five touchdowns.

Bridgewater averaged 241.0 yards and threw for nine scores in his five starts. He, too, had to play without Kamara, Cook and Smith in his final start.

Brees said he isn't sure how long he'll continue to wear a splint on his right thumb, on which he had surgery Sept. 18, but he has decided to keep using it for now because he feels comfortable with it.

Cook, who had seven catches for 78 yards and two touchdowns over his last two games before his injury, said he "felt good" in practice and sounded encouraged about his prospects for picking up where he left off.

"I definitely feel like my production was getting better," Cook said. "I'm excited. I only missed one game without Drew. Me and him get a chance to come in and kind of help this offense be even more productive than it has been."

"Look, we've seen it all during training camp," Payton said. "We've just got to continue to look at giving him opportunities."

Kamara has not yet fielded interview requests this week but indicated he would on Thursday, as he often does when healthy.

The Saints have gotten by without Kamara thanks to Latavius Murray, who had 62 rushing or receiving touches combined for 307 yards from scrimmage and four touchdowns during New Orleans previous two games.

The Saints also have been heavily reliant throughout the season on top receiver Michael Thomas, who has made 73 of the team's 203 receptions for 874 of the team's 2,088 yards through the air.

"Obviously, you understand opponents are going to find a way or try to find a way to (double-team) Mike, certainly in certain down and distances, and we've got to have other ways to get the ball down the field or to other receivers," Payton said. "I think we'll handle that all right."