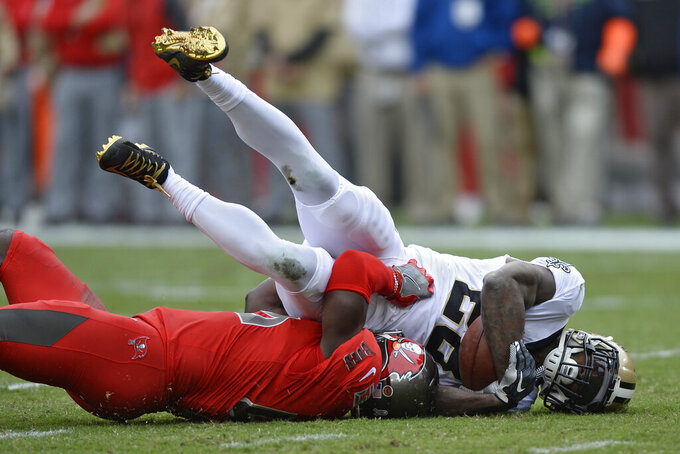 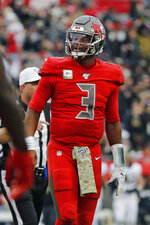 TAMPA, Fla. (AP) — The New Orleans Saints played with the urgency of a team determined to get back on track.

“You lose a game, you move forward. The next game can’t come quick enough,” coach Sean Payton said Sunday after the NFC South leaders rebounded from an ugly loss to last-place Atlanta with a 34-17 victory over the Tampa Bay Buccaneers.

Drew Brees threw for 228 yards and three touchdowns, and NFL receptions leader Michael Thomas became the first player in league history with 90-plus catches in the first 10 games of a season for the Saints (8-2).

In addition to a 16-yard scoring pass to Thomas in the first half, Brees tosses TD passes of 3 yards to Jared Cook and 6 to Ted Ginn Jr. after New Orleans was held out of the end zone during the previous week’s 26-9 loss to the Falcons.

Safety Marcus Williams put an exclamation point on a strong defensive performance, returning the third of New Orleans’ four interceptions 55 yards for a touchdown that put the Saints up 34-17 with just over five minutes remaining.

Thomas, who also became the first player with at least 90 receptions in each of his first four NFL seasons, had eight catches for 114 yards. That boosted his totals for 2019 to 94 receptions for 1,141 yards. The previous high for most catches in the first 10 game of a season was 89 by Hall of Famer Marvin Harrison and Atlanta’s Julio Jones.

“It’s just what we see every day in practice. Maybe it’s one of those things that when it’s all said and done you’ll look back and you’ll really appreciate it. I just love his mindset. He is a ‘I want the ball, I will get open, I will make the play for you’ guy,” Brees said.

“I’ve played with a lot of good ones, a lot of great ones, and the thing that’s common with those guys is the trust factor,” Brees added. “You have to be able to anticipate certain things which allow you to play with confidence and be accurate and make a lot of those throws that others might not try to make.”

A battered Jameis Winston completed 30 of 51 passes for313 yards and two TDS for the Bucs (3-7), who have lost five of six following a 2-2 start. In addition to throwing four interceptions, Winston was sacked twice and pressured all day by a persistent pass rush that left him hobbling across the field on a sore ankle to try to make the tackle on Williams’ long interception return up the New Orleans sideline.

“It's very frustrating. We've got the players. It's never been about the players since I've been here,” said receiver Mike Evans, closing in on his sixth 1,000-yard season, said. “It's just we've been very, very inconsistent. ... I don't know what we've got to do to overturn it, but we've got to do something because this feeling is awful."

Brees, meanwhile, was 28 of 35 with no interceptions in his third start since returning from a thumb injury that sidelined him five games. The Saints outgained the Bucs 195 yards to 11 while building an early 20-0 lead, controlling the ball for 20 of the game’s first 25 minutes. An offensive line playing without injured guard Andrus Peat protected the 40-year-old quarterback, who was not sacked Sunday after Atlanta got to him six times the previous week.

“One of the things we felt like was going to be important in this game was a fast start on the road, and I thought we had that,” Payton said. “It wasn’t our best game, but I thought we did a lot of good things to win.”

Winston threw TD passes of 6 yards to Peyton Barber and 30 yards to Chris Godwin. Tampa Bay ran the ball a franchise-low eight times for 36 yards, with Winston scrambling for a team-leading 23 on two attempts.

Saints running back Alvin Kamara rushed for 75 yards on 13 carries. He also had a team-high 10 receptions for 47 yards.

“It’s huge,” Kamara said of getting back on track after losing to the Falcons. “Any time you lose, it’s just a little bit more of a heightened awareness to go into the next game, execute and ... come out with a victory.”

The Saints beat the Bucs 31-24 in New Orleans in Week 5, holding Evans without a catch. While replicating that success figured to be difficult, even if injured cornerback Marshon Lattimore — the primary defender on Evans in the earlier meeting — had played Sunday, the Saints nevertheless did a nice job again of containing one of the league’s top receivers with P.J. Williams filling in for Lattimore.

Evans had four catches for 69 yards and no touchdowns. The sixth-year pro boosted his season total to 58 for 993 yards — seven yards shy of joining Hall of Famer Randy Moss as the only players in NFL history to begin a career with six consecutive 1,000-yard seasons.

Saints: Played without Lattimore (hamstring) and Peat (forearm), who were injured during last week’s loss to Atlanta. Team did not announce any injuries during the game.

Buccaneers: OLB Carl Nassib (groin) missed his second straight game, replaced in the starting lineup by Jason Pierre-Paul. ... Winston said he was hit in the ankle while throwing the interception that Williams returned for a touchdown. He added he doesn’t expect it to be a problem or affect his status for next week.

Buccaneers: at Atlanta on Sunday.