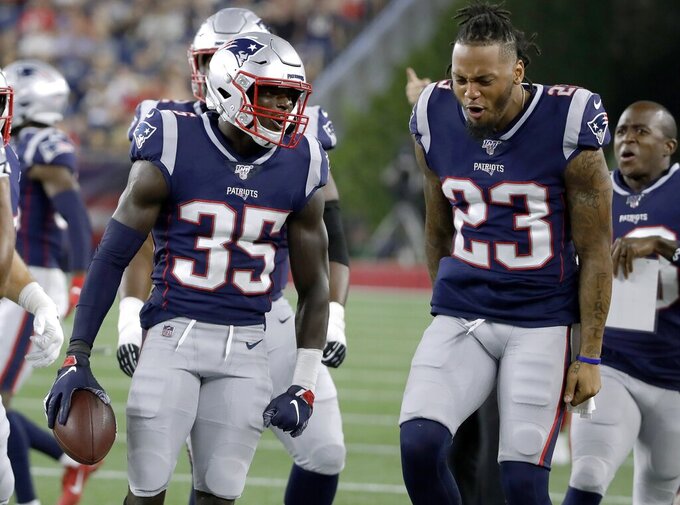 Hoyer's release gives the job of backing up 20-year veteran Tom Brady to rookie Jarrett Stidham, the fourth-round draft pick out of Auburn, who played in all four preseason games.

Stidham completed 61 of 90 passes in the preseason for 731 yards, with four touchdown passes and one interception. His ascension to the backup role means that the Patriots will carry just two quarterbacks for the seventh time in the past eight years.

Starting center David Andrews was placed on injured reserve after suffering blood clots in his lung last week. Because he was not on the 53-man roster, he cannot be reactivated during the season.

"Whatever my role is on this team, that's what I'm going to do," Stidham said after throwing for 225 yards and two touchdowns Thursday in the Patriots' preseason-ending 31-29 loss to the New York Giants. "Whatever it is, I'm going to continue to work as hard as I possibly can to do that and to help the team."

Hoyer, 33, who was entering his 11th NFL season, was two years into his second tenure with the Patriots, having been signed by them out of Michigan State as an undrafted rookie free agent in 2009. He also played for Arizona, Pittsburgh, Cleveland, Houston, Chicago and San Francisco.

Hoyer did not play in either of the Patriots' final two preseason games.

The biggest surprises were in the Patriots' receiving group, where Thomas was released while rookie Gunner Olszewski was retained after initially being told earlier Saturday that he would be let go.

Thomas, 31, was recovering from Achilles tendon surgery when he was signed as a free agent in April, but he caught a team-high seven passes for 87 yards and two touchdowns in the preseason finale. Like Hoyer, Thomas is not subject to the waiver process and could return to the Patriots if they make further roster moves.

Olszewski, an undrafted free agent out of Bemidji State in Minnesota, became the Cinderella story of the preseason. He played defensive back at the small Division II college but raised eyebrows in New England with his energetic play as a wide receiver, kick returner and cornerback.

Players not subject to waivers that were released were center James Ferentz and defensive tackle David Parry.