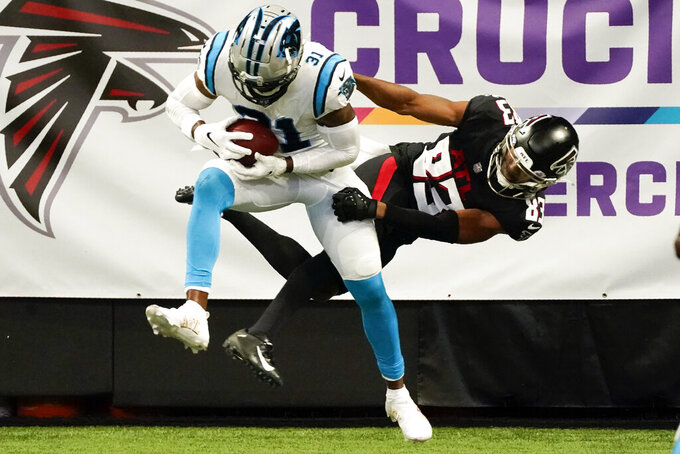 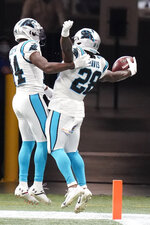 The Atlanta Falcons are about to start life without Dan Quinn.

Teddy Bridgewater threw for 313 yards and two touchdowns, Juston Burris made a huge interception in the end zone and Carolina held on Sunday for a 23-16 victory over the winless Falcons — the final blow to Quinn's coaching tenure.

The Falcons dropped to 0-5 for the first time since 1997. Quinn and general manager Thomas Dimitroff were fired hours after the game.

“This is a results business and I owe it to our fans to put the best product we can on the field," owner Arthur Blank said. “The results of late do not meet our standard or what I’ve promised our fans.”

The Falcons planned to announce an interim coach Monday.

Carolina (3-2) won its third in a row under first-year coach Matt Rhule — all since McCaffrey went down with a high ankle sprain. Mike Davis has sure taken advantage of his opportunity, filling in brilliantly for the All-Pro running back.

“The first two weeks, we were just trying to figure out who we are," said Davis, who rushed for 89 yards and hauled in nine catches for another 60 yards, including a 3-yard touchdown. “We just want to be the toughest team you play.”

After falling behind 20-7 at halftime, the Falcons drove into position for a tying touchdown in the fourth quarter. But, on third-and-4 from the Panthers 5, Matt Ryan badly underthrew a pass to Russell Gage in the back of the end zone, allowing Burris to make the interception with 8:49 remaining.

Burris, a strong safety, figured the Falcons would single him out.

“A safety on a slot receiver. They thought they had a mismatch," he said. "The coaches have faith in me to cover a slot receiver, and I wanted to prove them right:”

With the Falcons clearly deflated, Carolina drove nearly the length of the field — taking 7:39 off the clock — to set up Joey Slye’s third field goal of the game, a 22-yarder with 1:10 remaining.

“For us to do what we did at the end of the game, that goes back to our physicality, our toughness mentally and physically,” said Bridgewater, who was 27 of 37 in the eighth 300-yard passing game of his career. “It was huge for us down the stretch.”

The Panthers built their lead behind touchdown passes of 57 yards to D.J. Moore and the short toss to Davis with 23 seconds left in the first half, drawing boos that could be heard even from a sparse, socially distanced crowd of 6,656 at 75,000-seat Mercedes-Benz Stadium.

Atlanta, which this season became the first team in NFL history to squander fourth-quarter leads of at least 15 points in consecutive games, tried to turn the script in the second half.

Ryan blamed himself for letting the chance slip away. Playing without top receiver Julio Jones, the Falcons quarterback was held to 21 of 37 for a season-low 226 yards.

“I know I’d like to play better than I did today,” Ryan said. “Late in the game, you’ve got to find a way to punch it in.”

Younghoe Koo kicked three second-half field goals, including a 54-yarder with 4 seconds remaining that the Falcons took in hopes of recovering an onside kick and getting one last shot at a tying Hail Mary. But Robby Anderson fell on the high hopper to finish off the Falcons.

It also was the finale for Quinn, who went 43-42 in five-plus seasons as coach. He led the Falcons to a pair of playoff appearances, most notably in 2016 when Atlanta reached the Super Bowl for only the second time but infamously squandered a 28-3 lead to the New England Patriots.

The Panthers snapped a five-game losing streak to their NFC South rival, beating Atlanta for only the second time in their last 10 meetings.

The Falcons did plenty of damage on the ground, rushing for 166 yards with a 6.6-yard average. Todd Gurley led the way with 121 yards on 14 carries, including a 35-yard TD that gave Atlanta an early 7-0 lead.

Bridgewater has completed 75 of 102 (73.5%) for 824 yards with five touchdowns and one interception during Carolina's winning streak. He has also run for a TD, while being sacked only two times.

During that same span, Davis has rushed for 219 yards on 45 carries, with one TD, and caught 22 passes for 132 yards and two scores.

Not bad for a guy who has played on four teams and was claimed off waivers by the Panthers last season.

Panthers: DE Brian Burns was knocked out of the game with a concussion after diving into a pile of tacklers late in the first half. Burns remained face down on the turf for several minutes before getting up slowly and wobbling to the sideline. ... Carolina also CB Donte Jackson (toe), DT Kawann Short (shoulder) and DE Yetur Gross-Matos (ankle).

Falcons: CB Kendal Sheffield, who missed the first three games of the season with a foot injury, left the field in the final minute of the first half with an injured right ankle. Sheffield was hurt while trying to defend a 22-yard pass along the sideline to Anderson. ... Injury plagued DE Takk McKinley sustained a groin injury in the first quarter and did not return. ... Jones couldn't go because of a lingering hamstring injury that has kept him off the field for all but one half in the last three games.

Panthers: Go for their fourth straight victory when they host the Chicago Bears (4-1) next Sunday.

Falcons: Travel to Minneapolis to face the Minnesota Vikings with an interim coach.