Bridgewater has the Broncos riding high after long slide 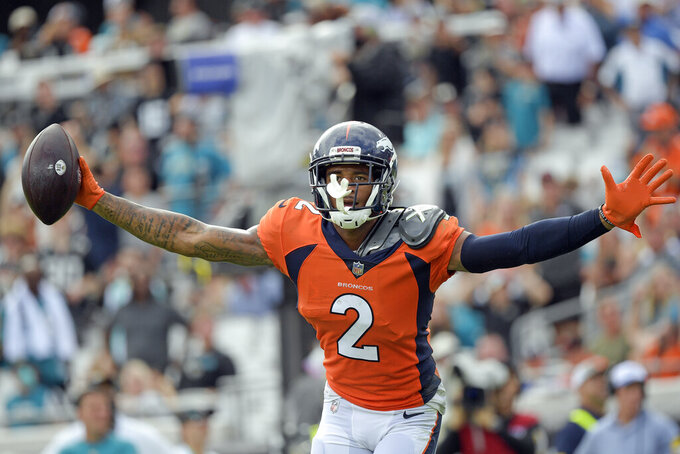 ENGLEWOOD, Colo. (AP) — Maybe it's time for the Denver Broncos and their fanbase to start viewing Teddy Bridgewater as more than just a bridge over the team's turbulent quarterback waters.

Thanks to his excellent start, the Broncos are one of two AFC teams that are unbeaten after two weeks.

The other is division rival Las Vegas, meaning the Broncos and Raiders are both looking down at the Kansas City Chiefs for the first time in what feels like forever.

Bridgewater is just the fourth quarterback in NFL history to open a season with two touchdown passes, no interceptions and a 75% completion rate in each of his first two games of a season.

Bridgewater has completed 54 of 70 passes for 579 yards and four TDs.

And he's a cheap date for Denver, too.

After GM George Paton acquired him from the Panthers, they redid his deal and erased the 2022 season, which means he'll be a free agent next March.

The Broncos could always move on and look for their 12th starting QB since Peyton Manning's retirement, but maybe they've found something in Bridgewater and maybe Bridgewater has rediscovered his mojo in the Rocky Mountains.

“He’s just a damn good quarterback,” coach Vic Fangio said after Denver's 23-13 win at Jacksonville on Sunday, “and if you just go back in his career, he was the starting quarterback of a playoff team in Minnesota, had the catastrophic injury in practice just dropping back, he basically lost two years to his career because of that injury, ends up in New Orleans as a backup, gets five wins, pays the entire last year in Carolina, started off very well, now he’s here with us.”

And maybe for a while.

The offense is proficient and the defense opportunistic, a combination the Broncos haven’t had in half a decade. Fangio isn't too worried about his ground game that has gained just 175 yards on 56 carries aside from the two biggest runs in each game: Melvin Gordon's 70-yard game-sealing TD in the opener and rookie Javonte Williams' 16-yard rumble Sunday.

“These first teams went to extreme measures to try to stop our run, which is one of the reasons we’ve been able to translate it into real good passing days these first two games," Fangio said. "So, you know maybe teams in light of our passing success these first two weeks will play the run a little more honest and maybe that will get it going, too.”

The training and medical staff. The Broncos lost three starters in Week 1 and two more in Week 2. For a while under former strength and conditioning coach Luke Richesson, soft tissue injuries had become rare. Not anymore.

“All the years past, whenever an injury would happen, you’d be like, ‘Damn, what are we going to do?’” defensive end Shelby Harris said. “But this year I just feel like with the young guys we have and with the veteran presence” the Broncos can withstand their injury epidemic.

Special teams. Was anybody surprised the Broncos allowed a 102-yard kickoff return for a touchdown? Even with better, faster players thanks to Paton’s roster-building prowess and his focus on the kicking game, special teams blunders under coordinator Tom McMahon remain a bad habit the Broncos just can’t shake.

After missing most of the offseason following surgery on his left ankle, now it’s Chubb’s right ankle that’s limited him to 19 snaps this season. He and Von Miller have only played 21 of a possible 50 games together.

9 catches, 159 yards — In just his second game back from a season-ending knee injury in 2020, WR Courtland Sutton set career highs in receptions and yards. His 159 yards were the most by a Broncos wide receiver since Emmanuel Sanders' 162 against Kansas City on Nov. 27, 2016.

55 yards. Sutton's catch in the third quarter, the longest reception of his four-year career.

20. The number of career interceptions by S Kareem Jackson after picking off Trevor Lawrence on Sunday.

Taking care of business against the New York Jets at home. Doing so would give Denver its first 3-0 start since Gary Kubiak’s last team went 4-0 before a 5-7 finish began the Broncos’ five-year slide into mediocrity following Super Bowl 50.