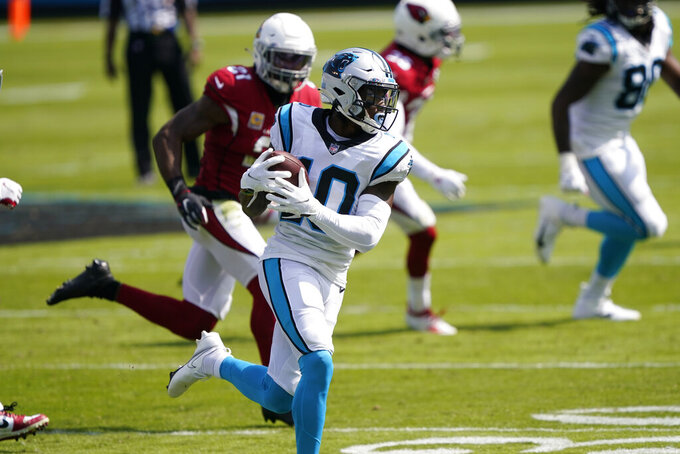 CHARLOTTE, N.C. (AP) — Teddy Bridgewater threw for 276 yards and two touchdowns, ran for his first score since a devastating knee injury in 2016, and the Carolina Panthers solved their red zone woes in a 31-21 win over the Arizona Cardinals on Sunday.

The Panthers (2-2) scored touchdowns on their first four trips inside the Cardinals’ 20-yard line to build a 28-7 lead one week after settling for five short field goals in a 21-16 victory over the Chargers last week.

Bridgewater scored his first rushing touchdown since Dec. 20, 2015 on an 18-yard scramble, sidestepping several tacklers to reach the end zone and give Carolina a 14-0 lead in the first quarter. It was his first TD rushing since tearing an ACL and suffering a dislocated left kneecap during a training camp practice with the Vikings.

Mike Davis, filling in for the injured Christian McCaffrey, had 111 yards from scrimmage and a touchdown. Reggie Bonnafon and Ian Thomas caught short TD tosses from Bridgewater and Robby Anderson had eight catches for 99 yards.

The Panthers' defense limited Kyler Murray to 133 yards passing, although he did throw for three touchdowns.

DeAndre Hopkins, who came into the game averaging more than 10 catches and 118 yards receiving per game, was limited to 41 yards on seven receptions after a week in which he didn't practice due to a foot injury.

Carolina, which allowed 65 points in the first two weeks, has held its last two opponents to 37 points.

The Panthers were allowed to host up to 5,240 fans for Sunday's game under new state guidelines set in place by Gov. Roy Cooper. The attendance announced was 5,120 in the first game fans were allowed to attend this season at Bank of America Stadium.

Bridgewater and two other Carolina players knelt during the playing of the national anthem while others held up their fists. The entire Cardinals team remained in the locker room for the anthem.

Cardinals: Running back Kenyon Drake left late in the fourth quarter after being shaken up on a run. It was the end of a disappointing day for Drake, held to 28 yards on 12 carries.

Panthers: Cornerback Eli Apple was ruled out after reinjuring his hamstring in the first half. Apple missed the first three games with a hamstring issue. ... Greg Little started at left tackle after Russell Okung (groin) missed his second straight game.

Cardinals: travel to face the winless Jets (0-4) next Sunday.

Panthers: visit the Falcons in a divisional matchup next Sunday.