On brink of playoffs, Cowboys still trying to fix offense 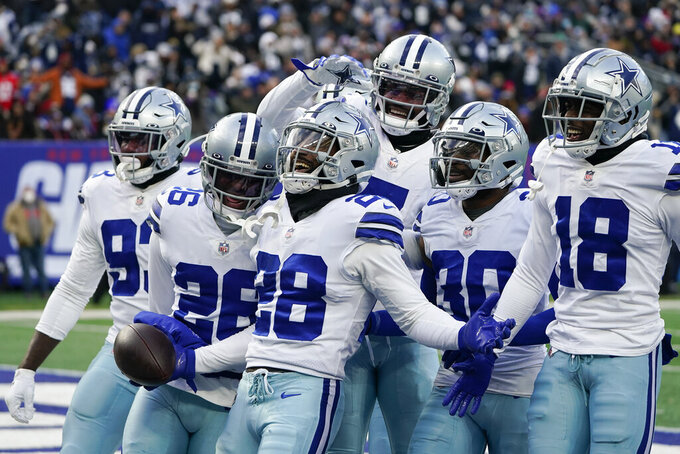 The only way the Dallas Cowboys can clinch the NFC East title in what's left of Week 15 is if Washington and Philadelphia tie.

With the playoffs and division crown essentially wrapped up, the final three games of the regular season will be about trying to solve the mystery of an offense gone cold.

The Cowboys (10-4) also aren't out of the running for the top seed in the NFC with Washington set to visit Sunday night. Washington could be eliminated in the division race with a loss to the Eagles on Tuesday night in a game that was postponed over COVID-19 issues.

The Dallas defense led the way again in a 21-6 victory at the New York Giants, with the Cowboys becoming the first team since Detroit in 2007 to force at least four turnovers in three consecutive games in the same season.

Now Dak Prescott and the offense go through yet another week of trying to figure out what hasn't been right since he injured a calf in an overtime victory at New England in Week 6.

“I think it’s OK we continue to play complementary football,” coach Mike McCarthy said. “Trust me, we know who’s being productive and the things that we need to do a little better. I say it every week, they’re very accountable.”

Dallas scored on five possessions against the Giants. The three drives that ended in field goals (68, 58 and 37 yards) were longer than the two that ended in touchdowns (13 and 29).

In the first seven games, the Cowboys never had fewer than 380 yards on offense. In the past seven, they've fallen short of that five times.

Put another way, if Dallas is to get past the divisional round for the first time since the last of the franchise's five Super Bowl titles to finish the 1995 season, the offense will have to find its early-season form.

“I mean, we had some success,” Prescott said. “Obviously, we want to be better and we want to get some touchdowns and I think if we got touchdowns, we’d feel a whole lot better about the overall performance.”

Dallas is tied with Indianapolis for the NFL lead with 31 takeaways. If the Cowboys get three more, they'll have their most since finishing with 43 in 1987, two years before Jerry Jones bought the team, fired coach Tom Landry and made himself general manager. Dallas leads the NFL with 23 interceptions and hasn't had at least 25 since 1985.

For the record, the franchise records are safe. The Cowboys had 53 takeaways, with 37 interceptions, in 1981, when they lost to San Francisco in the NFC championship game on “The Catch” by Dwight Clark. Everson Walls set the club record that year with 11 interceptions as a rookie.

Another part of the problem for the Dallas offense lately is difficulty hitting big plays. In the first six games with Prescott, the Cowboys averaged nine plays per game of runs of at least 10 yards and passes of at least 20 yards. The average is five in the seven games since then. In victories over Washington and the Giants the past two weeks, Dallas had one play of more than 20 yards.

DE DeMarcus Lawrence had one of the best games of his career, in just his fourth game of the season after missing 10 with a broken foot. Lawrence had a forced fumble and a pass breakup in the same game for the first time in his eight seasons.

Lawrence's hit on Mike Glennon led to the interception that set up the first touchdown. He and Neville Gallimore shared the tackle when Glennon was stuffed on a fourth-down sneak at the New York 29, setting up the other Dallas TD.

WR CeeDee Lamb had two dropped passes, including when he was open deep over the middle early in the second half with Dallas leading 15-6 and looking to all but put away the game. Drops by Lamb and other receivers have played a part in the offense's dysfunction.

The Cowboys believe LT Tyron Smith (ankle) will return at some point. They're just not saying when. Smith was out against the Giants, the fourth game he has missed this season because of the injury. S Donovan Wilson (chest/shoulder) was designated for return from injured reserve last week, improving his chances of coming back against Washington. Wilson has missed the past four games.

10-plus — Dallas is the first team since San Diego in 2007 to have a player with at least 10 sacks and another with at least 10 interceptions. LB Micah Parsons has 12 sacks, still 2½ shy of Jevon Kearse's rookie record with Tennessee in 1999 after a six-game streak with at least one sack ended against the Giants. CB Trevon Diggs got his 10th interception and is the third player in franchise record to reach double digits.

The Cowboys have a rare quick rematch two weeks after beating Washington 27-20. More and more eyes are peeking ahead a week at Dallas' regular-season home finale against Arizona. The Cowboys and Cardinals are in a three-way tie with Tampa Bay for the second-best record in the NFC, a game behind Green Bay.