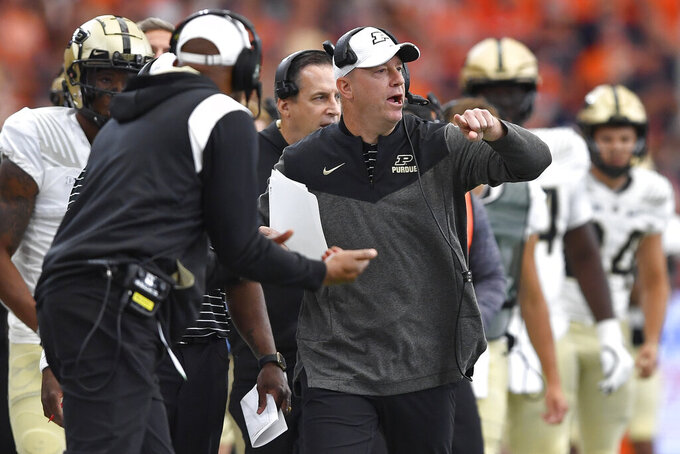 He wants everyone in the Boilermakers program to stop jawing with referees and opposing players, starting with himself.

After apologizing to his players Sunday for the unsportsmanlike conduct penalty he drew in the final minute of Saturday's shocking loss at Syracuse, Brohm took his critique public Monday during his weekly news conference.

“We cannot get any more 15-yard penalties, including myself, including sideline warnings and on the field," he said. "We just have to be really, really by the book and keep our mouth shut and coach and play football.”

On Saturday, tight end Payne Durham caught a touchdown pass to give the Boilermakers the lead with 51 seconds left. The fifth-year senior then drew a 15-yard penalty as a pushing and shouting match erupted after the extra-point attempt. Brohm said he asked the ref for an explanation and was called for another unsportsmanlike conduct that forced Purdue (1-2, 0-1 Big Ten) to kick off from its own 10-yard line.

Syracuse then benefited from good field position and two defensive penalties — a holding call near midfield and a pass interference call that set up the winning score.

“Mine at the end was stupid,” Durham said after 50 yards in penalties in the final minute led to the 32-29 loss. “It’s something I shouldn’t do. A guy was trying to get retaliation out of me, and it worked. I said one thing back to him and the ref threw a flag."

Brohm acknowledged he didn't agree with every call, certainly not some of what was called in those final seconds, and contacted the Big Ten office to express his concern. A personal foul call in the third quarter also helped Syracuse score its first touchdown and a first-half penalty erased a first-half interception.

“Against Penn State, we had 9 penalties for 92 yards. Against Syracuse, 13 for 138,” Brohm said. “Against good football teams, like Penn State and Syracuse on the road, you’re not going to win those games. Those are the main things that we’ve got to work on and that starts with me. I have to do a better job — a much better job."

The first chance to see if the Boilermakers can prove Brohm can turn his talk into actions comes Saturday against Florida Atlantic (2-2, 1-0 Conference USA).

”Football is a tough, physical, emotional game, and we’ve got to make sure we control our emotions at all times, no matter what’s going on," Brohm said. “If you look at our team last year we averaged 4.4 penalties a game for 43 yards a game. That’s probably why we won nine games, pure and simple. The chatter has to stop."