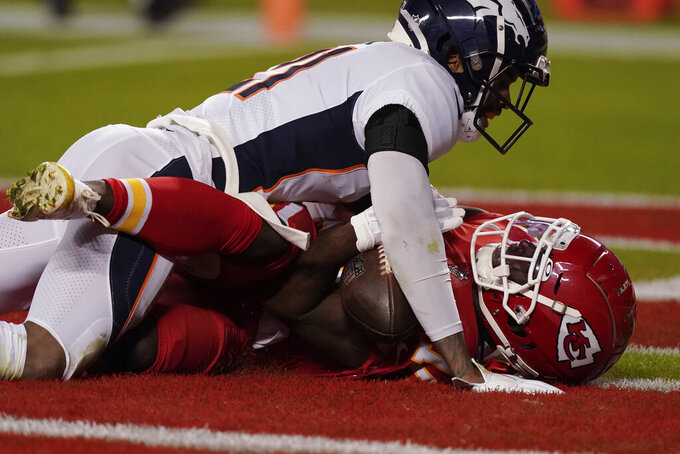 ENGLEWOOD, Colo. (AP) — A.J. Bouye’s six-game suspension for violating the NFL’s policy on performance-enhancing substances caps a disheartening first season in Denver for the eight-year veteran and leaves the Broncos without their top three cornerbacks.

Bouye’s suspension is the latest blow in a disappointing season rocked by an injury epidemic and the coronavirus pandemic that's snared a wide swath of players, coaches and team executives.

“It’s obviously upsetting what happened, but it’s 2020,” quarterback Drew Lock said. “I mean, you can expect anything to happen this year and that’s what we’re doing and when something does pop up, we roll with it and keep moving on.”

Bouye received the supplement in question from the same medical professional that led to Will Fuller and Bradley Roby of the Houston Texans getting suspended for six games last week, KOA NewsRadio in Denver reported. Fuller and Roby said last week they had been assured the product was safe, but it turned out to contain a substance on the league’s banned list.

“Yeah, I was disappointed for him,” Broncos coach Vic Fangio said about an hour after the league suspended Bouye. “Players have to make really, really good judgments with the people they trust with their career and with their finances and obviously something went wrong with this person that he dealt with and trusted. It’s a disappointing situation for everybody.”

Fangio said the suspension didn’t catch the team off guard because Bouye informed him of the situation two weeks ago, “so we knew it might be coming, we didn’t know when. This week was earlier than we thought. ”

Bouye’s suspension cuts short a disappointing season in Denver, where he missed four games with a shoulder injury and another with a concussion, plus parts of two other games when he got hurt. He finished 2020 with just 23 tackles and seven pass breakups.

“He did have a choppy season. I think the injuries played a part in that,” Fangio said, adding Bouye was starting to play better lately “but we’ll just have to see (about his future). It was a rough season for him with the injuries interrupting his availability and play and now having to deal with the PED suspension.”

Bouye, who spent his first four seasons with the Texans, was acquired from Jacksonville in the offseason for a seventh-round pick. Including roster bonuses, he was making about $10.3 million this season and was set to earn nearly $12 million next season.

The suspension would hang over Bouye into 2021 when he’d have to sit out the first two regular-season games. He would be eligible to participate in the offseason, training camp and preseason games.

The Broncos will turn to cornerbacks De’Vante Bausby and rookie Michael Ojemudia on Sunday at Carolina (4-8) with Kevin Tolliver Jr., Duke Dawson Jr. and newly re-acquired safety Will Parks the options in sub-packages.

Parks, who was claimed off waivers from Philadelphia this week, “will stay inside and will play either nickel, dime or safety,” Fangio said.

Given the injuries and suspension at cornerback, Parks said he was getting a crash course in the Broncos’ 2020 playbook. “Everything that I was doing last year, so my book is big so far," he said. "My notes are all over the place. Obviously, with the guys going down I’ve definitely got to prepare for every position, all of them.”

The Broncos are also bracing for another suspension. Running back Melvin Gordon has a court case next week on a drunken driving arrest from October, and the new collective bargaining agreement calls for three-game suspensions in such situations.

NOTES: QB Jeff Driskel and KR Deontae Spencer remain in COVID-19 protocols. ... RG Graham Glasgow (foot) was held out of practice Wednesday along with ILB Mark Barron (illness) and RT Demar Dotson. ... S Trey Marshall (shin) returned to practice on a limited basis. With the temperature at 67 degrees, the Broncos practiced in shorts.