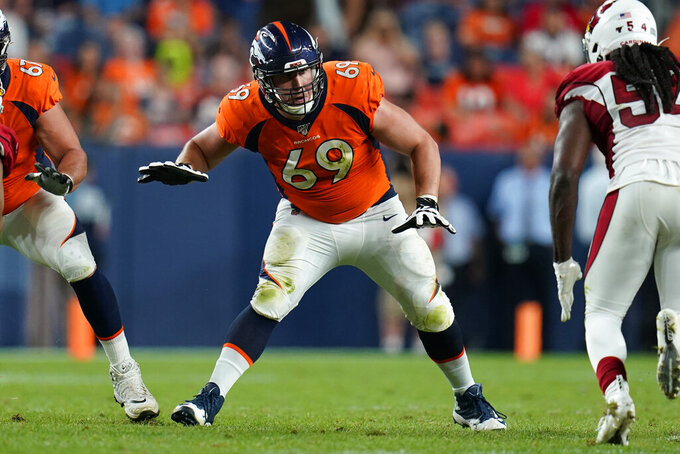 FILE - In this Aug. 29, 2019. file photo, Denver Broncos offensive tackle Jake Rodgers (69) looks to block an Arizona Cardinals player during the first half of an NFL preseason football game in Denver. The Denver Broncos could be relying on a jumbled offensive line this weekend in the regular season finale against Oakland. (AP Photo/Jack Dempsey, File)

DENVER (AP) — Phillip Lindsay figures it would be fitting for the Denver Broncos to put an end to Oakland's days as an NFL city.

A victory over their arch-rival Sunday would do that.

The Raiders (7-8) bring faint playoff hopes into Denver, where they can clinch just their second trip to the postseason since 2002 — and give Oakland another week to cheer for its team, which is moving to Las Vegas next year.

To reach the playoffs, the Raiders need to beat the Broncos (6-9) and get lots of help: losses by the Titans and Steelers, a win by the Colts and a least a win by the Patriots, Bears, Chargers or Lions.

At least the Raiders have a chance at extending their season into 2020. The Broncos are missing out on the playoff party for the fourth consecutive season, tying the NFL record for longest drought by a Super Bowl winne r.

There is, however, rekindled hope in Denver thanks to first-year coach Vic Fangio and rookie quarterback Drew Lock, who's won three of his four starts and brings a moxie to the position that's been missing since Peyton Manning's tenure and a mobility not seen since Tim Tebow's time.

Had the Broncos not lost three times in the final minute or even shown up earlier in their season-opening 24-16 loss at Oakland, they'd be the ones fighting for a playoff berth instead of the Raiders.

"We're here to end our season on a right note for next year and they want to try to get to a playoff game, so it's going to be a battle," Lindsay said. "You can say this is like a little playoff game for them because if they think they're going to come in here and just get one, they're sadly mistaken."

Here are some other subplots Sunday when the Broncos try to finish 5-3 at home, which would mark their first winning record at Mile High since 2016:

Temperatures on Sunday are forecast to be in the 30s and that has usually spelled doom for QB Derek Carr and the Raiders. Carr has lost nine straight starts when it has been below 50 degrees. He owns a 65.9 passer rating in those games compared to 94.7 in all others. He's had particular problems throwing deep in the cold, going 8 for 47 for 277 yards, three TDs, four INTs and a 37.5 rating on passes at least 20 yards downfield in cold weather.

The Raiders got a big boost offensively with the return last week of rookie slot receiver Hunter Renfrow, who caught a 56-yard TD pass on a third-down conversion on the opening drive. He had five catches in all on third downs, turning three into first downs. Renfrow leads all rookies with 16 third-down catches for first downs. He finished the game with seven catches for 107 yards in what he said was his first 100-yard receiving game.

"Never in high school, or college," he said. "This is my first 100-yard game in my life. Usually I had like 96, but I'd never get over the hump. It was good, and it was good because we needed it to win."

The Raiders signed linebacker Will Compton off the street midway through the season and he is making a big impact. He's stepped into a starting role as middle linebacker and is making all the defensive calls despite being relatively new to the system. After playing mostly as a reserve his first six games, Compton hasn't missed a defensive snap the past two weeks and has 21 tackles in those games.

"He got a great demeanor about him," coach Jon Gruden said. "Very poised, very calm. I went out there on the field to check on one of our players and he got on my case for not smiling, not having a good time. He's a weird dude, man. He loves football, that's why he fits in here. But he's really made some plays and made an impact here at a position where we really needed him."

MAN IN THE MIDDLE II

Inside linebacker Alexander Johnson didn't play a single defensive snap over the first month of the season. But since stepping in against the Chargers in Week 5, he's had 83 tackles, second only to veteran linebacker Todd Davis's 106 stops since Oct. 6.

"He's still affected a little bit by the knee injury he sustained about a month ago or so, but he is improving on a week-to-week basis," Fangio said. "But very pleased with A.J.'s play and where he's been this year. "... Hopefully a solid offseason will make him even better."

Right tackle Jake Rodgers, who has been cut 13 times and received a game ball after his first significant NFL action last week, is in line to make his first career start Sunday with Elijah Wilkinson (ankle) in a walking boot and Ja'Wuan James declaring himself out.

James said Tuesday he has dealt with torn ligaments in his left knee all season. Not playing in the finale means James played just 63 snaps in the first season of the four-year, $51 million deal he signed in March, which made him the game's highest-paid right tackle until the Eagles signed Lane Johnson to a four-year, $72 million extension in November.