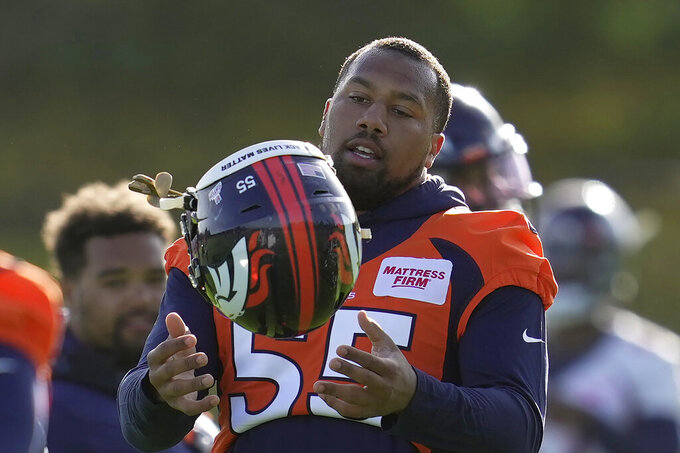 HARROW, England (AP) — Broncos outside linebacker Bradley Chubb is flattered by trade rumors but said Friday that he’d “love to be in Denver long-term.”

Chubb has recorded 5.5 sacks and two forced fumbles this season heading into Sunday's game against the Jacksonville Jaguars at Wembley Stadium.

“I would love to be in Denver long-term. I’ve got my house, I got everything, I’m comfortable,” Chubb said. “At the end of the day it’s between my agent and (Broncos general manager) George (Paton), whatever they decide to do, but like I said I’m focused on winning these games.”

Chubb is one of several Broncos whose names have been mentioned ahead of Tuesday's NFL trade deadline, especially with the team on a four-game losing streak.

Paton on Thursday said the team wants to keep its core players and that Chubb is one of them. But when asked if the Broncos are sellers in the market, the GM responded, “we’re going to do what’s best for the team.”

Chubb said the speculation is “kind of cool," in that "it lets you know that I’m playing good ball where other teams notice it as well.”

He said he hasn't given any thought to playing elsewhere.