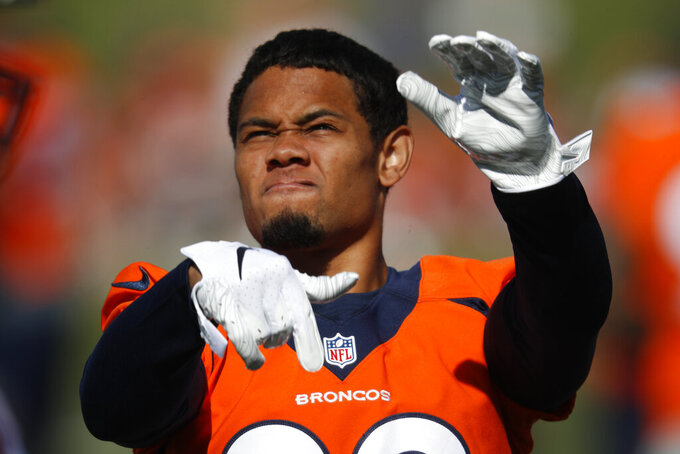 FILE - In this July 18, 2019, file photo, Denver Broncos cornerback Bryce Callahan (29) takes part in drills at the team's NFL football training camp in Englewood, Colo. Callahan will miss at least another month after undergoing a medical procedure Wednesday, Sept. 25, 2019, on his surgically-repaired left foot. Coach Vic Fangio said Callahan, who has yet to make his Denver debut, will miss 4-to-6 weeks and a full-fledged second surgery is still a possibility as is a trip to injured reserve. The Broncos (0-3) had big plans for Callahan when they signed him to a three-year, $21 million deal in the offseason.(AP Photo/David Zalubowski, File)

ENGLEWOOD, Colo. (AP) — The Denver Broncos still wonder how cornerback Bryce Callahan will buttress their secondary. They'll have to wait at least another month to find out.

Callahan underwent a medical procedure Wednesday "to promote the healing" of his surgically repaired left foot, which will sideline him another four to six weeks, coach Vic Fangio said.

A second, full-fledged surgery remains a possibility as does a trip to injured reserve that would sideline the fifth-year cornerback a lot longer, Fangio added.

Callahan has yet to make his Denver debut after following Fangio over from Chicago and signing a three-year, $21 million deal in free agency.

Callahan missed the preseason and the Broncos' first three games after experiencing pain where a screw was inserted into his left foot, which he broke last December, snarling the Bears' breakthrough season that ended an eight-year playoff drought.

Despite his injury, the Broncos coveted Callahan, whom they envisioned playing outside more than he had in Chicago, allowing Fangio to mix and match versatile DBs Kareem Jackson and Chris Harris Jr.

"In Kareem's case, he didn't have a lot of nickel practice during the offseason and preseason. He's still learning on the job. He knows what to do. He's experienced. But there's been a play or two that he didn't play correctly and it's no fault of his own," Fangio said. "He just hadn't been on the job long enough for us."

Jackson was held out of practice Wednesday with a tight hamstring.

Second-year pro Isaac Yiadom started in Callahan's spot during the Broncos' 0-3 start but he's been supplanted by another ex-Bears cornerback, De'Vante Bausby , an Alliance of American Football alum. Bausby replaced Yiadom in the first half at Green Bay last weekend and had two stops and three pass breakups.

"I think he did a great job," Jackson said. "I think he made some big time plays on third down. As a secondary we know he's very capable. He showed us that all throughout camp so for him to come in and make those plays it wasn't surprising at all."

The scrambled secondary has contributed to the Broncos going three games without a sack or a takeaway.

"That's shocking," Jaguars rookie QB Gardner Minshew said. "I know a lot of people are down on them, but they're a lot better than what their record says and they're playing some good ball at times and had some tough breaks. But it's a team that we don't take lightly. They've got some serious talent over there."

Notes: Among those limited at practice were: OLB Bradley Chubb (knee), RB Royce Freeman (shoulder) and WR Emmanuel Sanders (quadriceps). ... Fangio said MRIs on DE Derek Wolfe (ankle) and ILB Josey Jewell (hamstring) "came back better than we were initially worried about," and both have a chance to play Sunday. ... RT Ja'Wuan James (knee) is on schedule to return as early as next week.