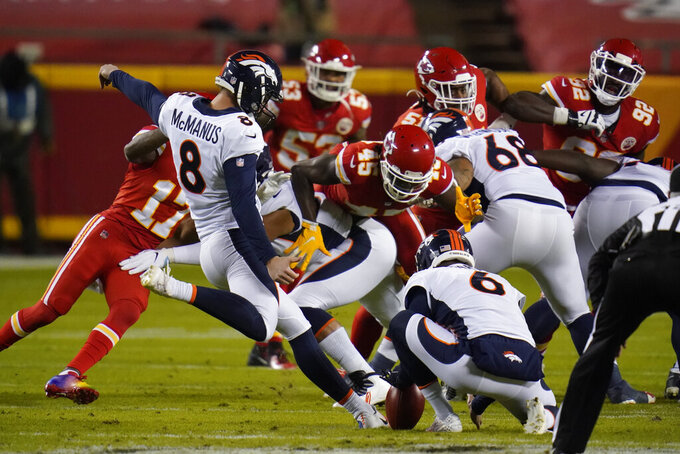 ENGLEWOOD, Colo. (AP) — When the Denver Broncos were forced to play the New Orleans Saints without any quarterbacks last month, they vowed not to get caught similarly ill prepared should something happen to their kicker or punter.

So, they signed Taylor Russolino, a 31-year-old rookie who played for the XFL’s St. Louis Battlehawks earlier this year.

Once he cleared COVID-19 protocols himself, the Broncos put him on their practice squad and isolated him from the other specialists.

Russolino worked out only with special teams coordinator Tom McMahon from the time he arrived late last month until this week when the contingency plan began paying off.

Kicker Brandon McManus is expected to miss the Broncos’ game against the Buffalo Bills on Saturday after going on the reserve/COVID-19 list as a close contact this week, coach Vic Fangio said Thursday.

“I know there’s still some question with him and the league with when his counting of days should have started. I don’t know where that stands, but unless they change, he won’t play,” Fangio said. “If it would have been a Sunday game, he would have played.”

Russolino was 9 for 10 on field-goal tries in the ill-fated XFL this spring with a long of 58 yards.

“We all got our first look at him yesterday because since he’s been here, he’s been working and practicing while guys were meeting,” Fangio said. “So, none of us have really seen him other than Tom. He kicked very well yesterday in practice. I was very encouraged by what he did in practice yesterday. If he kicks as good as he did yesterday in practice, we’ll be fine.”

McMahon said not even long snapper Jacob Bobenmoyer or punter/holder Sam Martin were allowed to work with Russolino before this week.

“No, sir. He was — I shouldn’t say this — he’s the ‘COVID kicker,’ so naturally I kept those guys separate,” McMahon said. “You never want the contact to happen because he’s here to replace either Sam or Brandon if something were to come up like it came up this week.

“I didn’t even let those guys get in contact or even let their tracers go off. It was just me and him. If I got taken out by him, at least (assistant special teams coach) Chris (Gould) could run the game.”

McMahon said the Broncos became aware of Russolino last year when sports analyst and former NFL punter Pat McAfee called him to let him know about the combo kicker.

“Hey, there’s a guy that fits your criteria and some of the traits that you look for,” McMahon recalled McAfee telling him.

“That’s when I started following Taylor. He fit some traits, and when this thing came up and when we wanted to bring in a COVID kicker in case we needed him, he was the first name I gave to” the Broncos personnel department, McMahon said.

McManus has converted 8 of 10 field goals of 50 or more yards this season, and McMahon said he won’t hesitate to give the green light to Fangio should the Broncos face a decision on whether to go for a long field goal Saturday.

NOTES: Fangio said CB Bryce Callahan (foot) isn’t healing as fast as hoped and it’s doubtful he’ll return this season, meaning he’ll have three consecutive years in which he couldn’t finish out the season. ... Von Miller worked out on the sideline at practice, but still hasn’t been medically cleared from September ankle surgery to return to practice.