Broncos' Donatell: COVID-19 both weakened and awakened him 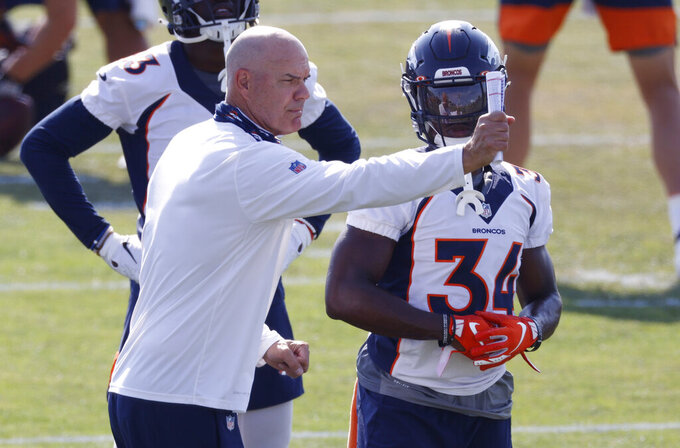 “The big takeaway is you miss the contact with people, that day-to-day contact with your players on the field, with your fellow coaches, coaching in games. I’ve never been deprived of that and it wasn’t a lot of fun,” Donatell said Thursday in his first public comments since testing positive for COVID-19 on Halloween.

“But I learned some things,” Donatell added. “I learned how special a lot of things are in life, and how important your health is. There are times when you got to press the pause button.”

Donatell hopes to travel with the Broncos (4-8) to their game against the Carolina Panthers (4-8) this weekend, where he’d direct Denver’s defense from the coaching box so he wouldn't have to spend three hours standing.

Donatell missed six games and last month and he spent five days in a Denver hospital with breathing difficulties.

“When something like that happens, it’s really weakens your body — five days. So, then you’ve got to battle back with your strength and cardio and that’s where I am,” Donatell said.

The 63-year-old is one of two people in the NFL known to have been hospitalized because of the virus that has killed more than 280,000 Americans. The other is Jacksonville Jaguars running back Ryquell Armstead.

“You asked me if I was ever nervous? I think everybody should be nervous,” Donatell said. “I wouldn’t be telling you the truth if I didn’t think so because there’s so many unknowns about this virus. There are so many unknowns about it. It’s not like a normal disease where people can tell you, ‘Hey, this is what’s happened in the past.’

“You’re wondering how far is this thing going to go? But again, hats off to the medical team. They were right there with me, five-star treatment the whole way and ready to go. Vic Fangio was extremely cooperative with my schedule, and we put it all together.”

Except for the five days he was hospitalized, Donatell attended virtual meetings throughout his hiatus and he returned to work on a part-time basis two weeks ago, gradually increasing his workload and trips into team headquarters.

Broncos sports medicine director Steve Antonopoulos nixed the notion of Donatell flying to Kansas City last weekend because it was a night game and the team plane didn’t return to Denver until 3 a.m.

“Sleep insomnia can be part of this; it was part of my case,” Donatell said. “We’re working through it. (Strength and conditioning coach) Loren Landow has been doing a great job with me getting my strength back and my cardio back. I just can’t wait to get back.”

“We missed him tremendously,” safety Justin Simmons said, adding that when Donatell was hospitalized, “it just kind of sunk back into reality: this thing is real, everyone’s living through this, we’re in a pandemic.”

Donatell knew he'd be peppered with questions about his experience, but said he wants to focus on his health now, not his illness.

“You need your health to do your best work in anything — that’s family, your relationships, your work,” Donatell said. “So, that makes you stop for a minute because you need it, and I haven’t had anything like that in my life. But no, I’m not thinking about it. I want my strength levels. They’re not what they were before I had this. But they will be. It’s just a temporary setback and I’m ready to roll.”

Donatell thanked the Broncos’ medical team for his care, his players for their concern and fans for their well wishes.

He said he had never missed a game in his life, which includes four decades of coaching, so watching the Broncos on television felt awkward.

“I don’t like it. I can’t see enough of the whole picture,” Donatell said. “It’s really a weird experience when you know the calls, you were involved in creating the game plan, and you’re not there. ... It’s just a weird experience. There’s things you can pick up and draw from that, but I’d rather not do that again.”

Fangio is excited to get his old friend back on game day.

“Ed’s got a veteran set of eyes. We can speak the same language really quick,” Fangio said. “We have a memory bank of things that have built up over 10 years. He’s got an experienced diet seeing things on the field, and he’ll be a tremendous help if we can get him back.”

NOTES: QB Drew Lock (back) was added to the Broncos’ injury report, but he was a full participant in practice. ... Blake Bortles rejoined Lock and backup QB Brett Rypien at practice Thursday after being isolated for eight days following the QB room’s COVID-19 slip-up two weeks ago. OC Pat Shurmur said that going forward, “it’s a day-to-day decision whether we bring him over here or not.” ... The Broncos activated KR Diontae Spencer from the reserve/COVID-19 list and placed CB Essang Bassey (knee) on IR.