Broncos' Drew Lock focuses on Chiefs, not on his future 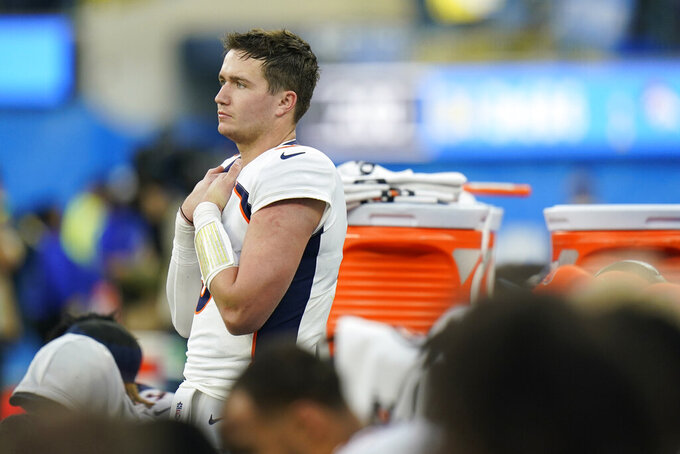 Denver Broncos quarterback Drew Lock stands on the bench in the closing minutes of a loss to the Los Angeles Chargers during an NFL football game Sunday, Jan. 2, 2022, in Inglewood, Calif. (AP Photo/Jae C. Hong)

The Broncos (7-9) expect both of their specialists to come off the virus list Saturday when they host the Kansas City Chiefs (11-5), but coach Vic Fangio said general manager George Paton and the personnel department were working on a contingency plan just in case they don't return.

“We feel like we'll have a good plan just in case that happens,” Fangio said. “I don't have the exact names or details for you.”

McManus, who kicked a career-long 61-yard field goal in Denver's loss to the Chargers in Los Angeles last weekend, and Martin went on the list Monday. If they're symptom-free Saturday, they'll be eligible to play in the game, which the NFL moved up a day as part of its Week 18 scheduling flexibility.

Drew Lock will make his third consecutive start for the Broncos this weekend, and he said he's not out to beat his hometown Chiefs or end Denver's 12-game losing streak to Kansas City, but simply to get a victory.

“I know it's not a narrative in our locker room; it might be out there in the cyberworld, but this win would mean no more than another win,” said Lock, who has lost both of his starts in place of Bridgewater the past two weeks.

“I mean, every single Sunday you go out there and everything you do, how you eat, how you sleep, when you come in, how much film you watch, all is pushed toward a win,” Lock said. “And a win in this league, it's not easy to do, obviously. You know, I think I'd be just as excited about a win this week as I'd have been last week."

Lock will at least have a supporting cast at close to full strength.

All returned to practice Wednesday along with receiver Tyrie Cleveland, who was activated off the practice squad COVID-19 list.

Lock was knocked briefly from the game last weekend when a hit from Joey Bosa sent him to the locker room for a pain injection in his throwing shoulder. Lock said he's doing much better.

“It's way less than what it was last year,” said Lock, who missed a couple of weeks in 2020 when he sprained his right rotator cuff in a game at Pittsburgh. “It's come a long way since Sunday when it happened and it will just keep progressing with our medical staff here and whatnot. I'll be as close as I possibly can to 100% on Sunday.”

With a fifth consecutive losing season assured and a sixth straight season missing the playoffs, the finale could spell the end of Lock's time in Denver, coach Vic Fangio's three-year tenure or Pat Shurmur's duties as offensive coordinator.

Although he lost his starting job to Bridgewater this year, Lock had only kind words for Fangio, who hasn't exactly been effusive in his praise of Lock this season.

“I've learned a lot from Coach Fangio since I've been in this league,” Lock said. "... I mean, you become a way better player being able to go against his defense. And even when you get to talk to him off the football field just about certain tendencies he might see on a team that you're playing this week, there's been a lot of benefits to having him as a head coach.”

Although Lock said he's not thinking about anything beyond Saturday, he'd like to stay in Denver in 2022.

“As long as you're in the NFL and you're playing and you get to be on a team as special as this one I don't know why you wouldn't want to be,” Lock said. “So, as far as my future goes, that's not up to me at this point. But I do know my future is playing a game this week and that's my No. 1 priority right now.”