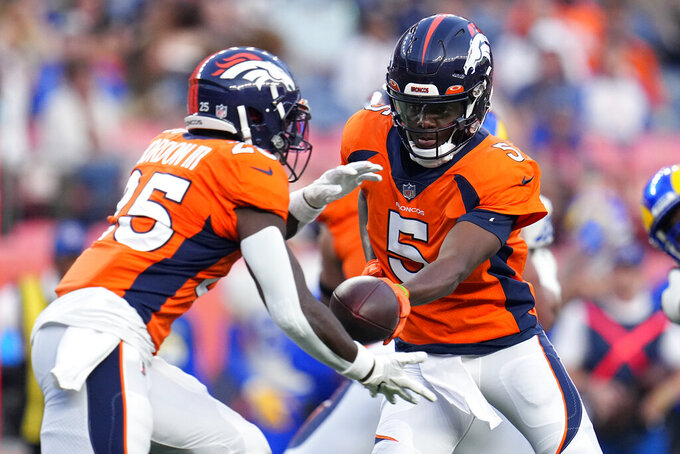 FILE - In this Saturday, Aug. 28, 2021, file photo, Denver Broncos quarterback Teddy Bridgewater (5) hands off to running back Melvin Gordon (25) during the first half of an NFL preseason football game against the Los Angeles Rams in Denver. The Broncos take on the New York Giants on Sunday. (AP Photo/Jack Dempsey, File)

EAST RUTHERFORD, N.J. (AP) — Coming off bad seasons, the Denver Broncos and New York Giants used free agency and the draft to put themselves in position to end playoff droughts.

Despite a 5-11 record in 2020, expectations were high for the Broncos to end a run of four straight losing seasons and get back to playoffs for the first time since winning the Super Bowl in 2015. The enthusiasm in Denver isn't tempered this year, either.

Giants fans are excited after a 6-10 record in Joe Judge's first season as coach. The free-agent additions of receiver Kenny Golladay and cornerback Adoree Jackson, the drafting of speedy wide out Kadarius Toney and the expected return of star running back Saquon Barkley from knee surgery seemed to have New York ready for its first postseason since 2016.

Heading into Sunday's opener at MetLife Stadium, the Broncos are still riding high after a perfect preseason. Hopes for the Giants are not so bright. New York played poorly in not winning in the preseason. Golladay, Jackson, Toney and Barkley all did not play because of injuries. The aftermath is those high hopes have faded a bit.

Of course, it all could change Sunday in a game in which Denver is a 1-point road favorite.

Giants veterans are ignoring the preseason. The starters played roughly two quarters out of 12.

“The sky’s the limit for us,” safety Jabrill Peppers. “We’re not thinking about last year, it’s a whole new year for us. We know the type of defense we can be, it’s just all about running out there and putting in the necessary work.”

The Broncos looked a lot better. They have a new quarterback in Teddy Bridgewater. The strong running attack is led by Melvin Gordon III, and the dynamic receiving corps features Jerry Jeudy, tight end Noah Fant and several other threats.

Bridgewater, who edged Drew Lock for the starting job, is excited.

“I think we addressed it back in the spring in OTAs, and then you come to training camp and you sense that guys have a sense of urgency,” he said. " You want to change the narrative around here, and we get an opportunity to do that this upcoming Sunday.”

The Giants lost nose tackle Dalvin Tomlinson to free agency in the offseason and coordinator Pat Graham has concerns about Gordon and the running attack for Denver.

New York did not do a good job in the preseason games and Tomlinson's replacement, Danny Shelton, has been bothered by a recent neck injury.

“I think we have all the right guys,” inside linebacker Blake Martinez said. “It comes down to understanding your assignment, knowing where the running back is and reading the offensive line, and then making the play.”

The Giants were ranked 12th in the league on defense last season, ninth in scoring defense.

Bridgewater is the 11th starting quarterback since Hall of Famer Peyton Manning retired after winning Super Bowl 50. No other team has had more signal callers in that span. Bridgewater is coach Vic Fangio’s seventh QB in his first 33 games as head coach. The only coach with more turnover under center in his first 33 games was Tampa Bay’s John McKay back in the late 1970s when the expansion Bucs lost their first 26 games and he went 4-29. Fangio is 12-20.

The Broncos have a young receiving corps that includes Courtland Sutton, coming off a torn ALC in Week 2 last year, Tim Patrick, Jerry Jeudy and K.J. Hamler. Throw in tight ends Albert Okwuegbunam and Noah Fant and the Broncos finally have an offense that won’t always be overshadowed by their traditionally stout defense.

Watch the Giants' offensive line. The right side is new with Will Hernandez taking over at guard and Nate Solder and Matt Peart probably splitting time at tackle.

The group struggled last season and was horrible in the final preseason start against the Patriots, particularly left tackle Andrew Thomas, the first-round draft pick in 2020. If that group can opens some holes for the running game and keep quarterback Daniel Jones on his feet, the expectations for the Giants will pick up.

The Broncos were a mess in their secondary last year when they lost several cornerbacks to injury. New GM George Paton made that his top priority and he signed free agent cornerbacks Ronald Darby and Kyle Fuller, then used the ninth pick in the draft on Alabama’s big cornerback Patrick Surtain II. He also re-signed safeties Kareem Jackson and Justin Simmons. So, what was a weak link is now one of Denver’s biggest strengths.