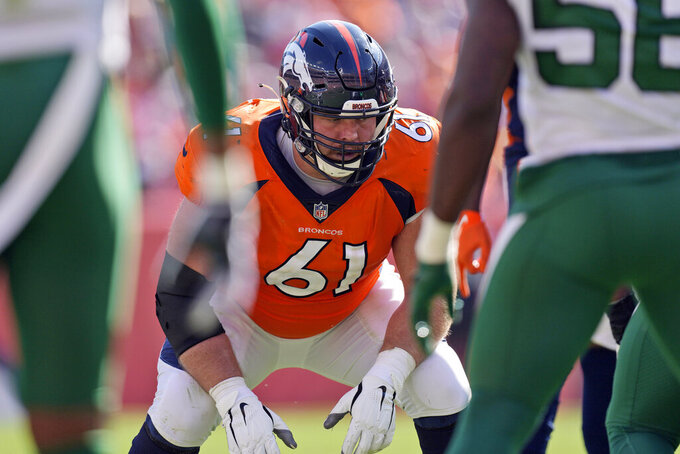 FILE - In this Sunday, Sept. 26, 2021, file photo, Denver Broncos offensive guard Graham Glasgow (61) lines up against the New York Jets during the first half of an NFL football game in Denver. Glasgow says the next time his heart starts racing in a game he’ll head straight to the sideline. He stuck it out in the season opener and only learned afterward that he was risking a stroke by playing through an atrial fibrillation episode. (AP Photo/David Zalubowski, File)

ENGLEWOOD, Colo. (AP) — He was hailed as a hero by his offensive coordinator, but Broncos guard Graham Glasgow says he'll head straight for the sideline the next time his heart feels like it's about to pound right out of his chest during a game.

The veteran right guard played through a racing heartbeat in the season opener last month at the Meadowlands and only after being taken by an ambulance to a hospital following Denver's win over the Giants did he realize how risky that had been.

Doctors diagnosed Glasgow, 29, with atrial fibrillation, an irregular and often very rapid heart rhythm that can lead to blood clots and increase the risk of stroke and heart failure.

“I kind of felt weird a little bit early but then during the second series I kind of felt that it was not normal. My heart was kind of beating out of my chest and I felt like I had to move my pads away from my chest to make room for it," Glasgow said this week in his first comments about the episode.

He wondered if he was having a panic attack.

“Then I thought maybe I’m having an asthma attack because it was a little difficult to breathe,” Glasgow said. “But the heart was just going at like a million miles a minute and I didn’t really know what it was. So I just kind of kept playing.”

He delivered the key block on running back Melvin Gordon's game-sealing 70-yard touchdown run late in the fourth quarter of the Broncos' 27-13 win.

After the game, Glasgow was hospitalized in New York for a couple of days.

“I went into A-fib during the game,” Glasgow explained, still in disbelief a 29-year-old athlete could go through that, even at 6-foot-6 and 310 pounds.

“I wouldn’t really say I was scared because I didn’t know what it was,” Glasgow said. "I mean, I don’t know. At some point I was just like, ‘Am I out of shape?’ I don’t know. I talked to my dad on the phone when I was going to the hospital and he’s like, ‘It’s not super normal for somebody your age.’”

That following week, offensive coordinator Pat Shurmur raised eyebrows when he declared that Glasgow's playing through his heart issue was “super heroic."

“He battled through it," Shurmur said. "I guess in the moment we didn’t know how big of an issue it was for him, but he’s a tough sucker. ... What he did was super heroic and I think that our team can learn from that.”

Looking back, Glasgow wouldn't call what he did gallant or gutsy in any way, but simply short-sighted and foolish.

"They told me that if it happens again, I should take myself out just so that nothing bad were to happen with possible stroke stuff or anything like that,” Glasgow said. "I think that knowing the potential long-term ramifications of it, I think I would probably want to get out of that as fast as I could.”

During atrial fibrillation, the heart's upper chambers beat chaotically and irregularly and are out of sync with the lower chambers. Symptoms can range from nothing at all to a pounding heartbeat, shortness of breath and weakness.

Glasgow said he's trying to avoid another episode by staying hydrated and using his CPAP at night because he has sleep apnea.

He said he hasn't talked to his brothers — Jordan is a Colts linebacker and Ryan was a Saints defensive tackle — about being careful themselves.

“Not really. I mean, all of them are younger than me," Glasgow said. “My dad has never had issues with this or anything, so the whole thing has just been odd.”

Glasgow returned to the lineup in Week 3, but suffered a knee injury against the Jets and missed another game before returning to the lineup last week in Pittsburgh.

“It’s been hard to get into a rhythm so far,” Glasgow said.