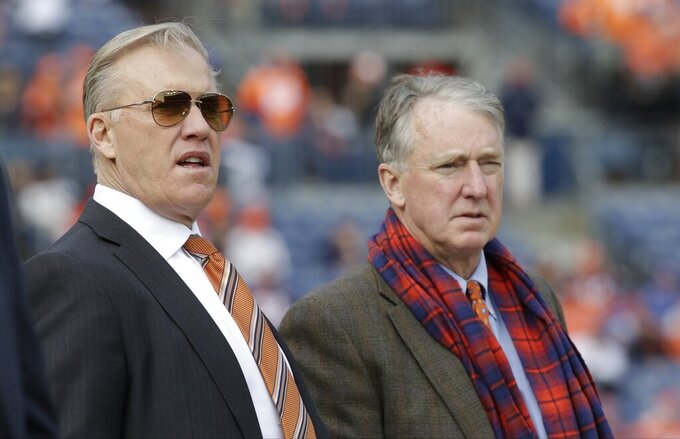 The Broncos said in a statement that both Elway and Ellis have minor symptoms but are "doing well' and will continue to work from home and in self-isolation and participate in virtual meetings while their health is monitored.

The team said contract tracing measures show that no players or coaches came into close contact with either Elway or Ellis recently.

“Based on a review of contact tracing data with the league, we are confident these cases originated independently outside team facilities,” the Broncos said. “There were minimal close contacts identified for each (no players or coaches) and those individuals have been notified.”

“While our facilities are closed for Election Day, coaches are conducting their game preparations today remotely as a precaution,” the team added. “Our organization will remain in communication with the NFL, making all decisions in consultation with the league and based on guidance from medical experts.”

The Broncos have had three assistant coaches go under the league's COVID-19 protocols — Curtis Modkins, Mike Munchak and Ed Donatell — in addition to right guard Graham Glasgow. Others at the team's headquarters also have been infected by COVID-19 in recent weeks.

The Broncos have been under the league’s enhanced COVID-19 protocols since Modkins’ infection. Those extra measures include increased distancing, face coverings on the practice field and inside the team’s facilities for players and coaches and remote team meetings. Position groups can still meet in person.

With those extra mitigation measures and only one Broncos player on the league's reserve/COVID-19 list, the league believes “there is not ongoing transmission among players and the day-to-day operations” in Denver, NFL chiefs medical officer Dr. Allen Sills said Tuesday. “But it’s something that we’re going to have to continue to monitor very carefully."

Sills said the Broncos have “done an excellent job in implementing our intensive protocols to minimize exposure within the team facility."

He said the spikes in overall coronavirus cases across the country, including Colorado, “increases vulnerability" for NFL teams. "And we have to look at where we think are likely sources of infection and so to date we’ve not seen transmission as extensively within the (Broncos) building there as we have coming from outside,” Sills said.

“But again, we are taking additional steps in Denver as we have in other situations to try to block off any transmission or any vulnerability and continue to monitor that."

Modkins, the team's running backs coach, returned to work last week after recovering from his infection. Munchak, their offensive line coach, was out all last week and Donatell, the team's defensive coordinator, went under COVID-19 protocols Sunday morning, skipping the Broncos' game against the Los Angeles Chargers.

Glasgow was diagnosed on Friday, and the Broncos canceled their on-field workouts that afternoon and isolated two other O-linemen, backup guard Austin Schlottmann and starting right tackle Demar Dotson, as a precaution.

Schlottmann and Dotson returned to practice Saturday and played against the Chargers. Schlottmann replaced Glasgow at right guard.

Ellis began feeling ill Sunday morning and contacted the team's medical staff. As a precaution, he watched the Broncos' 31-30 comeback victory over the Los Angeles Chargers from home, the first time in 26 years he'd missed a Broncos home game.

Ellis continued working from home Monday and received a positive COVID-19 test Tuesday morning, as did Elway, who left work for home Monday after he began experiencing mild symptoms of the infection, the team said.

As part of the NFL's COVID-19 safety protocols put in place so the league could try to play the 2020 season during the pandemic, the Broncos have had all their employees tested daily for the virus. Players, coaches and other employees also wear contract tracing devices to help curb any outbreaks.

The Broncos (3-4) are scheduled to return to work Wednesday morning to continue preparations for their game Sunday at Atlanta (2-6).

The Broncos’ best player, linebacker Von Miller, was the first major North American sports star to announce he’d contracted the coronavirus this spring. Denver safety Kareem Jackson also was infected last summer. And on July 30, the Broncos placed fullback/tight end Andrew Beck on the reserve/COVID-19 list, which is intended for players who have tested positive for the virus or who are quarantining after being in close contact with an infected individual. Beck returned to the team on Aug. 17.

Miller is on IR following ankle surgery and hopes to return to action next month.

The Broncos were affected by the New England Patriots' COVID-19 outbreak last month when their game at Gillette Stadium was pushed back, first by a day and then by a week, when Cam Newton and Stephon Gilmore, among others, were infected.

That meant the Broncos' Oct. 18 home game against Miami had to get pushed back to Nov. 22, when they were scheduled to host the Chargers. The Chargers' game was moved up to Nov. 1, which was originally supposed to be the Broncos' bye.