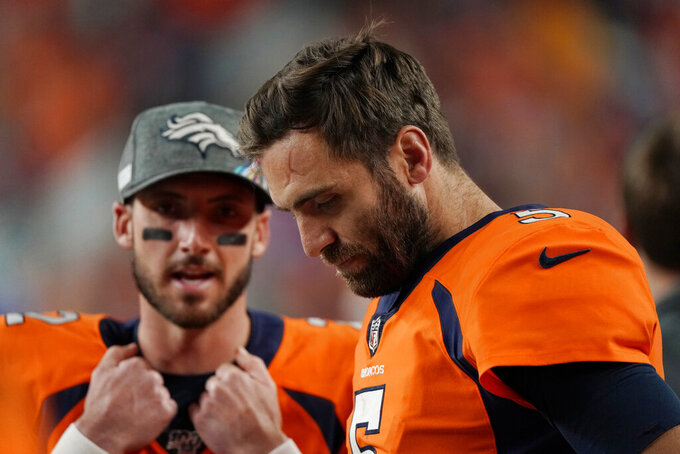 In this Thursday, Oct. 17, 2019 photo, Denver Broncos quarterback Joe Flacco (5) hangs his head as back-up quarterback Brandon Allen looks on during the second half of an NFL football game against the Kansas City Chiefs, in Denver. It took Allen four seasons and three different teams to get his shot at starting in the NFL. The fourth-year pro is taking over with Flacco sidelined by a herniated disk in his neck. (AP Photo/Jack Dempsey)

ENGLEWOOD, Colo. (AP) — When Brandon Allen takes his first NFL snap against the Browns on Sunday he'll become the sixth QB to start for the Denver Broncos since Peyton Manning retired four years ago, demonstrating once more the degree of difficulty in replacing an iconic quarterback.

That's something John Elway has seen from both the inside as the Denver Broncos' top football executive and from the outside after his Hall of Fame playing career ended in 1999.

Although there are notable outliers — the 49ers moved seamlessly from Joe Montana to Steve Young and Aaron Rodgers succeeded Brett Favre in Green Bay — teams typically struggle to remain relevant when their elite QB moves on.

"It's a hard position to fill," Elway said this summer. "We tried to shake all these trees around here the last four years and quarterbacks didn't fall out of it. It's difficult, but we've taken a lot of shots."

The Broncos, to a lesser degree, also had a hard time replacing Elway upon his retirement in 1999.

Brian Griese started the next four seasons as the core of the two-time champions' roster dissolved and he missed 13 games over that span with Chris Miller (3), Gus Frerotte (7) and Steve Beuerlein (3) filling in. Frerotte also started a playoff game at Baltimore in 2000.

Jake Plummer arrived in 2003 but only started 11 games with Beuerlein (2), Danny Kanell (2) and Jarious Jackson (1) also starting that year. Plummer returned against Indianapolis in the playoffs, beginning a streak of 46 consecutive starts before he was benched for rookie Jay Cutler down the stretch in 2006.

Elway was feeling pretty good about acquiring Flacco and drafting Drew Lock this year, but those fuzzy feelings quickly faded.

A sprained thumb in the preseason landed Lock on IR, stunting his growth under center in Denver's pro-set offense after he operated almost exclusively out of the shotgun and in the spread at Missouri.

Lock hasn't practiced since Aug. 16, relying on virtual reality headsets that simulate on-field action but do nothing to improve one's footwork.

Lock was eligible to return to practice two weeks ago, but the Broncos haven't rushed him back to gauge his prospects of playing this year.

"I'm anxious for it to happen — at the right time," coach Vic Fangio said Wednesday, shortly after Elway said on his weekly KOA radio show in Denver that the plan is to bring Lock back for Week 11, starting a 21-day clock for the team to decide whether to activate him or declare his 2019 season over.

Rookie Brett Rypien, who also has zero NFL regular season experience, will be promoted from the practice squad to serve as Allen's backup Sunday when the Broncos (2-6) host Cleveland (2-5).

Flacco joined Lock on the sideline this week when he was diagnosed with a herniated disk in his neck, one day after ripping his coaches' conservative play-calling in a 15-13 loss at Indianapolis.

Allen, a sixth-round pick by Jacksonville in 2016, gets his shot just two months after the Broncos claimed him off waivers from the Los Angeles Rams.

During that time, Denver's offensive line has surrendered 152 sacks. Flacco was sacked 26 times in half a season, including a career-high eight against Kansas City two weeks ago and three more Sunday at Indianapolis.

Allen is more mobile, so he could add a wrinkle to Denver's offense even as coordinator Rich Scangarello draws up a truncated game plan for him.

Browns coach Freddie Kitchens said his staff went back to Allen's days at Arkansas to prepare for a quarterback who's still largely a mystery on his own team.

"Honestly, I haven't had too much work with him," wideout Courtland Sutton said.

About the only intel this week came from Broncos running back Phillip Lindsay, who said, "First of all, Brandon is a very intelligent dude. I was very shocked and surprised when he first got here at how he got the terminology so fast and how confident and calm he is.

Notes: Von Miller (knee) missed practice for the first time since Aug. 17. ... Elway said on his radio show that he doesn't begrudge Flacco for criticizing the play calls Sunday and trusts Scangarello will be more aggressive if necessary. ... After declining to deal cornerback Chris Harris Jr. at the trade deadline, Elway said he hopes his star DB who is headed for free agency in March remains in Denver beyond this season.