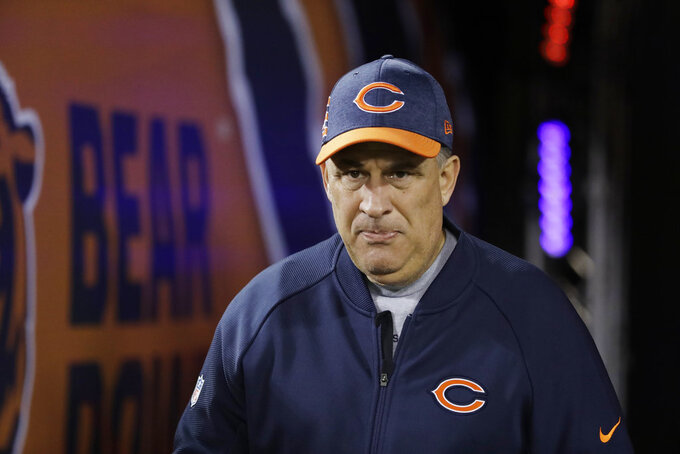 FILE - In this Dec. 9, 2018, file photo, Chicago Bears defensive coordinator Vic Fangio walks to the field before an NFL football game against the Los Angeles Rams, in Chicago. A person with knowledge of the decision tells The Associated Press that Denver Broncos general manager John Elway has decided on Chicago Bears defensive coordinator Vic Fangio as his new head coach. The person spoke on condition of anonymity Wednesday, Jan. 9, 2019, because the team hadn't announced the hiring. (AP Photo/Nam Y. Huh, File)

At 60, Fangio is the oldest of the five candidates on Elway's short list as he searches for his fourth head coach in six years. Fangio was also expected to interview for Miami's head coaching vacancy, but the Dolphins didn't schedule an interview with him.

Unlike Munchak and Pagano, Fangio has no NFL head coaching experience, although he has been an assistant for 32 seasons in the NFL and 34 overall, beginning with the Philadelphia Stars of the old USFL in 1984.

He has 19 years of coordinating experience for the Panthers, Colts, Texans, 49ers and Bears. He's built dominant defenses in different eras, successfully adapting to changes in personnel, philosophies and style. The 2018 season was his best as Chicago used a mix of youth and experience to lead the league in total defense and allow an NFL-low 17.7 points per game.

Elway said last week he values experience but also recognizes he needs to modernize the Broncos' offensive and defensive schemes to keep up with the run-pass option craze that has swept through the NFL and rendered traditional systems antiquated.

Elway also said personnel assistant and former Broncos head coach Gary Kubiak will move back into an offensive assistant coaching role in 2019, although he didn't specify if that would necessarily be as Denver's offensive coordinator.

Kubiak stepped aside over health concerns two years ago after going 24-11 in two seasons, including 15-4 in 2015 when the Broncos won the Super Bowl in Peyton Manning's final game of his career.

Since then, the Broncos have won just 11 of 32 games, in large part because of a quarterback carousel that has included four starters in Trevor Siemian, Brock Osweiler, Paxton Lynch and Case Keenum, plus flameouts Mark Sanchez and Chad Kelly.

If cornerback Bradley Roby and linebacker Shane Ray leave via free agency this spring, as expected, Elway's only remaining No. 1 draft picks on the roster will be pass rushers Von Miller and Bradley Chubb, the No. 5 overall pick a year ago, and left tackle Garett Bolles, who has been penalized an NFL-high 21 times for holding in his two NFL seasons.

Elway said in addition to looking for yet another coach, he's evaluating the mistakes he's made in building his roster.

The Broncos are coming off back-to-back losing seasons for the first time since 1971-72, a hard fall for a franchise that was hoisting the Lombardi Trophy just three years ago thanks to Miller's MVP performance in Super Bowl 50.

Fangio guided a defense that ranked No. 1 in the NFL and led the Bears into the playoffs for the first time in eight years. Four Chicago defenders were selected to the Pro Bowl: pass rusher Khalil Mack, safety Eddie Jackson, lineman Akiem Hicks and cornerback Kyle Fuller.

Last month Miller suggested the Bears' defense could lead Chicago to the Super Bowl title much as Denver's defense led the way three years ago even in an age of potent offenses capitalizing on ever friendlier rules to run up scores.

"The Bears have been doing it right. They get takeaways, they play tight coverage and they got a great run defense," Miller said. "I feel like the Bears definitely got a defense that can go all the way."

Instead, it could be their defensive coordinator joining Miller in Denver.