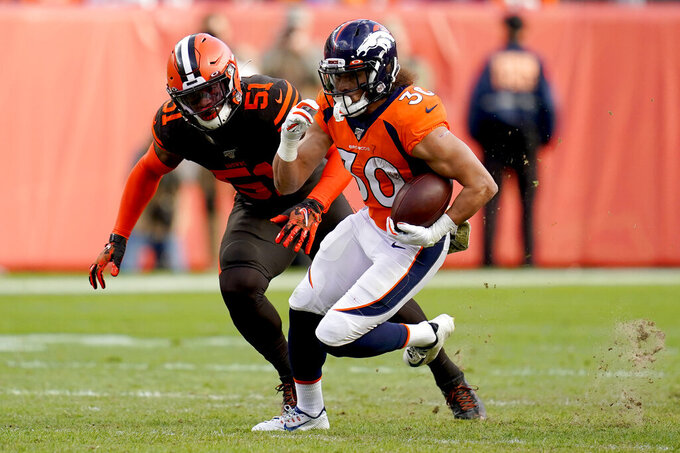 It may not matter.

The fourth-year quarterback might be only a temporary fix. Allen is caught between the brief Joe Flacco Era and the possible Drew Lock Experiment.

When the Broncos (3-6) resume after the bye week, the rookie Lock figures to be activated off the injured reserve and practice for the first time since jamming his right thumb in the preseason. All signs point toward Allen starting at Minnesota on Nov. 17, especially after he threw for 193 yards and two touchdowns in a 24-19 win over a reeling Cleveland squad. Allen posted a passer rating of 125.6 in that game, which was the third-best for a Broncos quarterback making his first start with the team. Only Manning (129.2) and Brock Osweiler (127.1) were better.

Allen understands the situation. He's rolling with it.

Then again, he's learned the art of patience since being a sixth-round selection by Jacksonville and then getting cut by the Jaguars. He was picked up by the Los Angeles Rams, who ended up waiving him, and finally arrived in Denver on Sept. 1.

"I take everything one day at a time," said Allen, who made his first start since guiding Arkansas past Kansas State 45-23 in the Liberty Bowl on Jan. 2, 2016. "Obviously, we've got a lot of great talent at quarterback on this team. Whatever opportunities I get, I'm going to try to take advantage."

Allen earned his chance to start when Flacco went on IR with a herniated disk in his neck after a loss at Indianapolis.

Backing up Allen for now is undrafted rookie Brett Rypien, who was promoted from the practice squad.

That all could change next week when the team resumes practice. Lock, the second-round pick out of Missouri, figures to occupy some sort of spot in the QB hierarchy.

The Broncos aren't tipping their hand, though.

Denver remains haunted by an offensive line that's allowed 30 sacks (one was on punter Colby Wadman when he attempted a failed fake). And one of the biggest distresses has been the play of left tackle Garett Bolles, the 2017 first-round pick whose number frequently gets called by officials for holding.

"I think Garett kind of plays with more confidence than you think and maybe that is warranted," Fangio said. "It's our job to maximize and make sure we're doing everything possible to develop him. If the guy has talent, we want to maximize every opportunity to develop it."

There's no real contingent plan for Bolles considering the injury to right tackle Ja'Wuan James (knee), who's given Denver only a handful of snaps for the $32 million in guarantees he signed for.

The shaky line could be a factor why offensive coordinator Rich Scangarello was so conservative with his play-calling early in the season. Flacco called out the rookie coordinator, although not by name, after a loss in Indy when the team took a cautious approach in the latter stages.

With a more mobile Allen running the show last weekend, Scangarello opened up the playbook. He broke out all the modernized elements expected of him since he arrived from San Francisco, even using tailback Phillip Lindsay in the wildcat formation to pick up a first down to close out the win.

What's more, Scangarello got the younger players involved — rookie tight end Noah Fant had a 75-yard score and Courtland Sutton caught a leaping TD pass over a Browns defensive back.

It was that sort of day.

"We need it to be a weekly thing for all of them," Fangio said.

The Broncos' defense has been dependable for the most part. Denver is currently ranked fourth in total defense.

Still, Fangio, who oversees the defense, believes there's another level for a unit that's missing Bradley Chubb (torn ACL) and cornerback Bryce Callahan, who signed a three-year, $21 million deal in free agency, only to reinjure his surgically repaired foot in July.

And while teams have double-teamed pass rusher extraordinaire Von Miller — he has four sacks — it's led to opportunities for Derek Wolfe (five sacks) and DeMarcus Walker (four sacks).

"There's no quit in this locker room," linebacker Todd Davis said. "We know what type of team we can be."