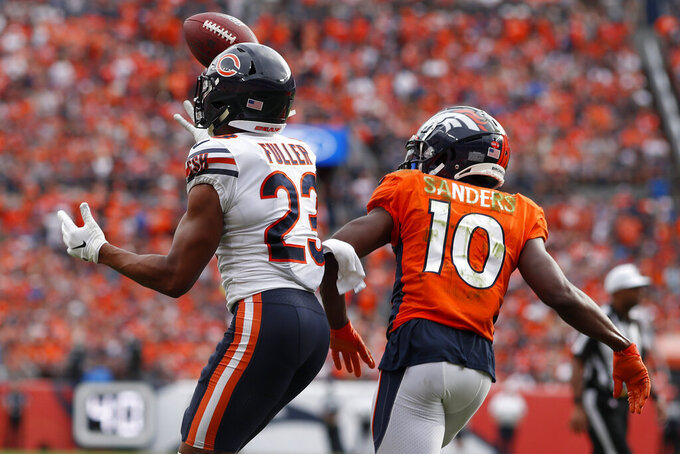 Never even dawned on him.

"I just want to get a win," the Denver receiver said Tuesday as the team began preparations for their game in Green Bay this weekend.

The Broncos are off to a 0-2 start for the first time since 1999, the year after Hall of Fame QB John Elway retired. They try to get back on track in hardly the friendliest of places (Lambeau Field) and facing one of the best in the business (Aaron Rodgers).

"We've got a challenge," Sanders said. "But we're definitely up for the challenge."

Sanders has steadily rounded into form after suffering a torn Achilles tendon last season. He was targeted 13 times by Joe Flacco on Sunday and brought down 11 passes. It was the third time in his career he's hauled in that many.

His late TD catch — a toe-tapper in the corner of the end zone — and subsequent reception on a 2-point try put Denver ahead with 31 seconds remaining. That simply set the stage for the Bears, who drove into field-goal range with 1 second remaining for a 16-14 win.

More proof that his surgically repaired Achilles tendon — and right ankle — are feeling better: He lined up for 93% of the offensive plays.

That's why he felt so exhausted.

"My body was telling, 'This doesn't feel right,'" said Sanders, who once had 18 catches while at Southern Methodist. "There were times where I was like, 'Why am I so tired? Why is this game so hard?' I kept chugging along."

In coach Vic Fangio's mind, the Broncos had quite a statistical anomaly in the Chicago loss — 27 first downs vs. 14 points.

"You should get more than 14 points with 27 first downs," said Fangio.

Part of that was due to penalties (including four holding calls on left tackle Garett Bolles). And part of that was an interception by Flacco deep in Bears territory late in the game. Sanders has been trying to put a finger on the precise reason the offense hasn't been able to get on track.

"Whether it's that we're young or we're not disciplined, but there's something going on because we definitely have talent," Sanders said. "We need to get better."

"We've got to get a few more explosive plays," Fangio said.

It could be as simple as that.

On defense, the Broncos are still chasing after their first sack of the season despite having pass rush specialists Bradley Chubb and Von Miller. The team also hasn't forced a turnover.

NOTES: Harris showed off his school pride after Kansas stunned Boston College 48-24 last week for its first road win over a Power Five school in nearly 11 years. Harris made sure to rub it in to fellow defensive backs Justin Simmons and Isaac Yiadom, who both went to B.C. "I've been roasting them boys all week," Harris said. "You all lost to Kansas at home. I've definitely been giving them a lot of (grief)." ... Harris played in the 2011 game at Lambeau when Denver lost to Green Bay 49-23. He has the game circled on his calendar. "I love the historic feel," Harris said. "I have a lot of games I circle. I call them money games. This is definitely a money game."