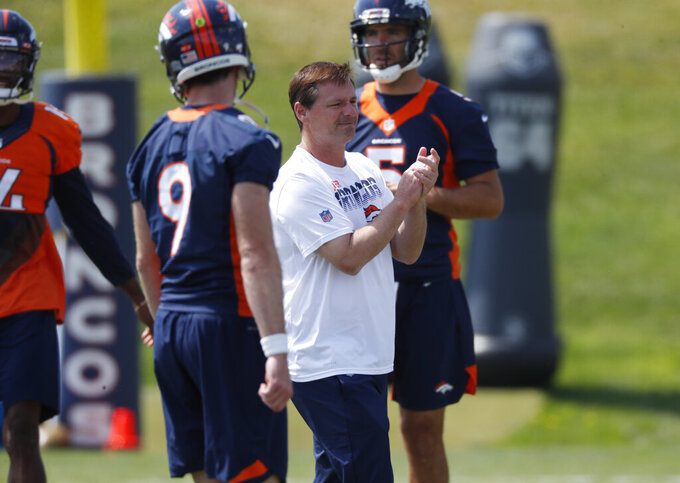 "We needed the spot," Elway said Saturday after trimming his banged-up roster to 52 players, one below the league maximum.

With nobody behind new starting QB Joe Flacco, who directed just four drives in the preseason, Elway gazed at other teams' castoffs in search of a passer who could quickly absorb offensive coordinator Rich Scangarello's system.

Lock sprained the thumb on his throwing hand two weeks ago. He'll go on IR Sunday, meaning he won't be able to attend practice unless he's recalled to the active roster toward midseason.

"My discussion with him today is it's not a year off for him," Elway said. "He's going to be able to do everything other than being on the football field. And he'll be able to work on his own and do some different things there, too. I expect him to continue to work hard and get a good feel with everything and keep learning with the offense, understand what he's doing there and be right in the middle of everything."

Hogan was Denver's backup last season, although he never got into a game. He was given plenty of work ahead of Lock early in training camp and his 123 preseason snaps were more than Lock (106), Rypien (94) and Flacco (30).

The Broncos' open roster spot could be filled by ex-Broncos linebacker Corey Nelson, who's due in for a visit, and Elway will have three more openings Sunday when he puts Lock, tight end Jack Butt (knee) and running back Theo Riddick (shoulder) on injured reserve.

The Broncos are thin at inside linebacker with Todd Davis, the team's leading tackler a year ago, having sat out since tearing a calf on the first day of training camp. Davis said he hopes to return to practice this week and play in the team's opener at Oakland on Sept. 9.

"Todd's a tough guy and a smart guy with a lot of experience, so if anybody could do it, it would be him," coach Vic Fangio said.