Broncos looking for rebound from QB Drew Lock after clunker 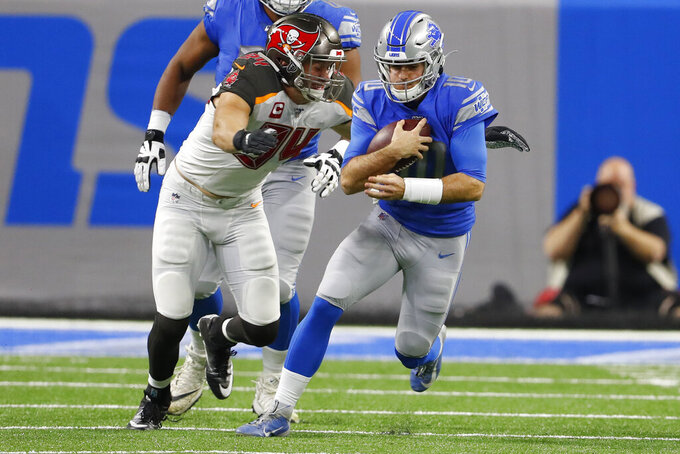 DENVER (AP) — The Denver Broncos have seen a great game, an ordinary outing and a stinker in the snow from rookie quarterback Drew Lock.

Now they get to see how he bounces back.

One week after getting buried in a blizzard at Kansas City, the Broncos (5-9) host the Detroit Lions (3-10-1) Sunday with a forecast of 62 degrees at kickoff.

"It'll be a big measure this week to see how he responds against Detroit," offensive coordinator Rich Scangarello said. "But I don't think it's the end-all, be-all."

The second-rounder's poor performance last week comes with an asterisk. Scangarello told his young quarterback that he'll never face a tougher task than playing in his hometown as the enemy for the first time, in a snowstorm, against the Kansas City Chiefs, who have owned the AFC West since Peyton Manning retired.

Scangarello gave Lock high marks for handling all that pressure. But the rookie followed up his win at Houston, where he became the first QB in NFL history to throw for 300 yards and three TDs in his first road start, with a clunker.

Only one of his passes was caught it the end zone -- by safety Juan Thornhill on an cringe-worthy floater to Noah Fant, and Denver's 23-3 loss ensured the Broncos of their third consecutive losing season for the first time in 47 years.

"You've got to bank that," Scangarello said, "and I think he'll continue to step forward. We'll see these next eight quarters how he plays, but I think he'll trend in the right direction."

A nice rebound from Lock could allow GM John Elway to head into the offseason without having to search for a new head coach or starting quarterback for the first time since 2015.

"The thing about Drew that's so impressive is his athleticism and his speed," Patricia said. "A lot of guys, and you see it on tape, maybe underestimate how fast he is, how mobile he is. You see him just run away from linebackers and safeties and he makes a lot of guys miss when you have him in the open space."

Lions undrafted rookie QB David Blough has made some history as well. He's only the third QB ever to have at least 70 completions, 745 passing yards and three TD passes in his first three career games.

The others are Kyler Murray this season and Cam Newton in 2011, both No. 1 overall draft picks.

Blough, who is 0-3 as Detroit's starter, squared off against Lock in a shootout last year when Purdue lost 40-37 on a last-second field goal to Missouri. Blough threw for a program-record 572 yards to Lock's 375 that afternoon. Altogether, they combined for 947 yards on 65-of-98 passing with six TDs and two interceptions.

"Let's go over," 950 yards in the rematch, Blough said. "Yeah, that was a good battle in college ... when I got to play against him. He's a great player, a great passer and who knows, maybe we go at it again this week and cut it loose?"

The Broncos lost safety Kareem Jackson to suspension and DE Adam Gotsis to ACL surgery this week. They're the eighth and ninth defensive players Denver has lost this season, a list that includes DE Derek Wolfe (elbow) and OLB Bradley Chubb (knee).

Trey Marshall, a second-year pro from Florida State, will get his first NFL start Sunday in place of Jackson, a Pro Bowl alternate.

"Oh yeah, I'm more than ready," said Marshall, who vowed to bring the same intensity Jackson did to the position.

Detroit receiver Kenny Golladay, who has an NFL-high 10 touchdowns and 1,000-plus yards receiving, will be shadowed by cornerback Chris Harris Jr.

"It will be fun," Golladay said. "I'm looking forward to him probably following me around."

Harris hearkened back to training camp when he covered teammate Courtland Sutton.

"Golladay, he's a big receiver kind of like Courtland, just big, great size," said Harris, who needs to pick off one more pass to extend his streak to nine consecutive years with multiple interceptions.

Patricia is not coaching for his job because the Lions told him earlier in the week he will be back, along with general manager Bob Quinn, next season. But Patricia and Quinn are certainly on notice.

"To be clear, our expectation is for the Lions to be a playoff contender in 2020," Lions owner Martha Firestone Ford said in a joint statement with vice chairman Sheila Ford Hamp and team president Rod Wood.

Detroit's Danny Amendola is having one of the best years of his 11-year career. He has 58 catches for 641 yards and a TD. He's 49 yards away from surpassing his career high set in 2010 with the Rams.