Broncos' Mike Boone biding time after coming in as backup 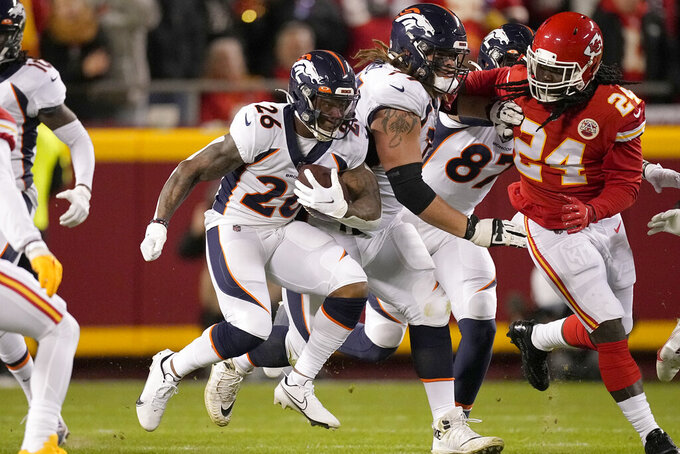 ENGLEWOOD, Colo. (AP) — For one primetime game, Mike Boone returned to the role he was brought in to fill by the Denver Broncos — backup running back.

The fourth-year player out of Cincinnati flashed what he could do, too, in giving the occasional breather to rookie standout Javonte Williams during a 22-9 loss at Kansas City on Sunday night.

But with Melvin Gordon III set to return from a hip injury this weekend against Detroit, and Williams soaring — he had 23 carries for 102 yards against the Chiefs — Boone’s looking more like the odd-back-out.

“You want to get carries. You want that exposure. Who doesn’t? That’s what we’re in it for,” said Boone, who had four carries for 35 yards in Kansas City. “Nobody’s in this to play in the shadow. But it’s my position I’m in right now. So that’s not my decision — if I get more carries. If I do, if my number is called, I’ll be there.”

Boone was signed by the Broncos in March — a special-teams ace who caught the eye of Broncos general manager George Paton when they both were with the Minnesota Vikings. Boone was expected to compete for the backup job to spell Gordon.

Then, the 26-year-old Boone injured his quadriceps during joint practices with the Vikings in August. He was placed on injured reserve and missed the opening five weeks of the season.

That opened the door even more for Williams, the bruising second-round pick out of the University of North Carolina.

Boone gets it. He’s a big fan of Williams, too.

“Explosive — as everybody knows,” said Boone, who was inactive at Cleveland on Oct. 21 and against Philadelphia on Nov. 14. “Everyone also knows you can’t bring him down. He runs hard and just for him to come in and be a rookie, the things he’s doing and how he’s playing, you’ve got to respect that.”

So Boone stays patient, waiting for his chance again. In the meantime, he’ll contribute on special teams. He was involved in 453 special-teams snaps over the last two seasons in Minnesota. He also sprang for a career-high 148 yards rushing against Chicago in 2019.

That’s the sort of upside the Broncos envisioned in Boone. He showed another glimpse at Kansas City, where he also had a catch for 19 yards.

“I was excited for him,” Gordon said. “He’s been waiting for his opportunity for a while now. He probably wanted a little bit more opportunity, but ‘3-3’ (Williams' number) was balling, so he kind of stalled him out a little bit. For the opportunities (Boone) got, he made the best of them and showed that he deserves to be in this league.”

The way coach Vic Fangio spoke, it sounds as though the Broncos (6-6) will return to the 1-2 tailback combination of Gordon and Williams against the Lions (1-10-1).

Or perhaps Williams and then Gordon.

“They’re two good players, and we’ll use them both,” Fangio said.

“The same effort I give on offense, I’ll give to special teams,” Boone said.

A heads-up to the coaching staff: Boone can play slot receiver. The 5-foot-10, 206-pound Boone saw time in that spot at Baker County High School in Glen St. Mary, Florida, where he once had 211 yards receiving in a game.

“I used to tell my quarterback, ‘Throw it up, and I’ve got you,’” Boone said. “Look, if (the Broncos) need me to play slot, I’ll play slot. I’ll play three-tech (defensive line), whatever. ... But right now I’m running back, so I’ll focus on that.”

NOTES: Set to be a free agent, Gordon hopes to be back in Denver next season. “I don’t think many people want me here as far as the fans. I've been seeing a lot of stuff. I understand. I get it," said Gordon, who said he felt fine — for the most part — after missing the Chiefs game with a hip ailment and believes he can play Sunday. "Love the fans, regardless of the hate right now. I think mostly it's because of fantasy (football).” ... CB Bryce Callahan (knee) returned to the practice field this week but Fangio wasn't sure if he would play Sunday. ... OLB Bradley Chubb (shoulder/ankle), DE Shelby Harris (ankle) and Gordon were limited Thursday in practice.