Broncos, NFL kick OBJ and Browns while they're down 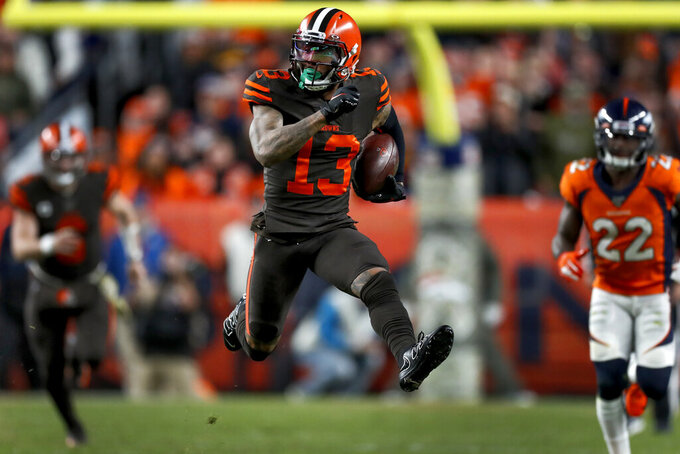 Cleveland Browns wide receiver Odell Beckham (13) runs after the catch against the Denver Broncos during the second half of NFL football game, Sunday, Nov. 3, 2019, in Denver. (AP Photo/David Zalubowski)

DENVER (AP) — Odell Beckham Jr. is fit to be tied — over a controversy with his cleats and with his faltering team.

The Cleveland Browns receiver was told by the league to change his shoes at halftime of a 24-19 loss to Denver on Sunday. That didn't sit well with Beckham or fellow receiver Jarvis Landry, who also was informed his cleats didn't conform with the dress code and needed to be changed.

It almost felt like a case of style over substance for a Browns team heading in the wrong direction. Cleveland dropped to 2-6 with a loss to a reeling Broncos team featuring a quarterback, Brandon Allen, making his first career start.

The aftermath: Coach Freddie Kitchens is on the hot seat. Quarterback Baker Mayfield can't seem to get the offense on the same page (one touchdown against Denver in five trips to the red zone). Safety Jermaine Whitehead sent threatening posts on Twitter following the loss that led to the team condemning his behavior in a statement. Star receiver Beckham was frustrated after a late fourth-down pass didn't come his way and was overheard expressing that frustration as he walked off the field.

"It was a tough loss," Beckham repeated over and over when asked about it later.

Asked if the Browns were headed in the right direction, Beckham said to check back later.

"Once we put a complete game together, you can come back and ask me," said Beckham, who had five catches for 87 yards. "We'll see. It's just tough. When you don't play a complete game and (have) stuff left on the field, or plays left on the table, it's hard to beat any team."

That said, Beckham hasn't written off the season.

Mayfield feels a similar way. He threw for 272 yards and one TD, but he couldn't convert a fourth-and-short on a QB sneak at the Broncos 5 with 5:23 left in the third.

"Singular focus on the next week ahead," Mayfield said. "Look at the film, see what happened. Obviously not getting touchdowns in the red zone is the biggest problem."

Kitchens called the loss "disappointing" and added, "we just didn't make enough plays to win the game." As for his job security, he said he doesn't give it a thought.

"I've never worried about it before," Kitchens said. "I'll do the best job I can do."

Whitehead posted threatening comments toward fans on Twitter. A few hours after the game, the Browns issued a statement.

"Jermaine Whitehead's social media posts following today's game were totally unacceptable and highly inappropriate," the statement read. "We immediately spoke with Jermaine upon learning of these comments. The Browns in no way condone that type of language or behavior. This matter will be further addressed internally."

At his locker after the game, Beckham talked almost as much about his footwear choice as his feats on the field.

At issue were a pair of clown-themed Nike cleats. He said he wore them for comfort, but they didn't match the Browns' deep orange and brown color scheme.

So he switched to a dark pair of that had "OBJ" stitched in white lettering on the side. He wasn't the only one to draw the league's attention, with Landry being told to change his gold ones featuring orange laces. He went to a brighter orange pair.

"You see guys wear highlighted green cleats not playing for the Seahawks, that don't have highlighter in their jersey at all — and they still wear the cleats," said Landry, who caught a 9-yard TD pass with 10:47 remaining. "Again, out of my control, those things. I switched cleats and tried to go back out there and win a game."

Same with Beckham. But he did wonder if the cleat controversy had everything to do with him (Beckham caused a stir earlier this season by wearing a nearly $200,000 watch that the NFL told Beckham not to wear again).

"I've seen people wearing cleats that are a completely different color from their team and they can wear them all game, on a prime-time game," Beckham said. "For some reason, when it comes to me, it's just not the case."

Beckham explained he's planned the choices of his cleats since the summer and they're predicated on what uniforms the Browns will be wearing. He said the team switched from an all-white jersey to this ensemble during the week.

"When I have cleats on my feet, they could be hot pink, lime green, it's never going to affect me," Beckham said. "It's not something I worry about while I'm running routes. ... It's tough."

Now, it's back to the drawing board.

"Leave this loss here, get on a plane, get back at it," Beckham said.