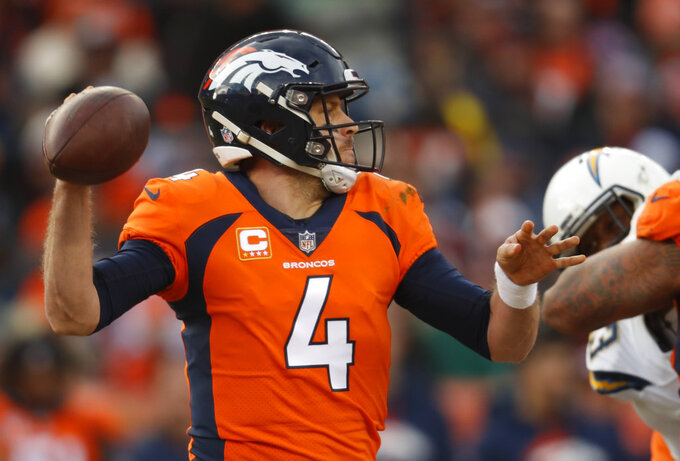 Denver Broncos quarterback Case Keenum throws a pass during the first half of an NFL football game against the Los Angeles Chargers, Sunday, Dec. 30, 2018, in Denver. (AP Photo/David Zalubowski)

ENGLEWOOD, Colo. (AP) — Whoever replaces Vance Joseph as the Denver Broncos' fourth head coach in six seasons may not find a franchise quarterback awaiting him.

What he will find is a roster packed with promise.

The Broncos (6-10) had a terrific infusion of youth last season led by running back Phillip Lindsay , the first undrafted offensive rookie ever to earn a Pro Bowl berth, although wrist surgery will keep him from playing in the all-star game.

NFL players typically make their biggest jump between their first and second seasons, so this group anticipates a big "leap year" in 2019, and they're pledging to lead the franchise out of its three-year playoff drought, too.

"Broncos country doesn't have to worry about us going 6-10 again," Sutton insisted. "Our core is going to be so strong and so tight, we're going to show up and we're going to go to work every single day, every week. And we're not going to leave it up for chance in any games."

Chubb led all NFL rookies by collecting a dozen sacks, something he said was just an appetizer.

"I'll definitely make a bigger impact" next season, Chubb said, "whether it be in the run game, the pass game, whatever it takes."

With the middling Case Keenum at quarterback, the biggest personnel attraction for head coaching candidates is the league's best pass-rushing duo of Chubb and Von Miller.

"I'd like to think that I'm a coach's dream," Miller said. "We've got a lot of big-time players here. We've got Bradley Chubb, who's coming into his second year."

The pair combined for 26½ sacks in their first season together.

Star cornerback Chris Harris Jr., who is in line for a big contract extension this offseason, said he hopes the new coach injects some juice into the playbook so it can catch up to the likes of Patrick Mahomes in Kansas City, Baker Mayfield in Cleveland and Lamar Jackson in Baltimore.

Harris said the Broncos have been stagnant since winning Super Bowl 50 three years ago on the strength of a historically good defense and they've watched other teams incorporate college game concepts and sweep right past them.

He wants the new coaching staff to incorporate the RPO (run-pass option) philosophies on both offense and defense, and Elway is on board.

Aside from the arduous search for a franchise QB, the Broncos have an ongoing ownership squabble and a demanding general manager who wants a quick turnaround, mandates immediate results and won't sign off on a slow rebuild "because that sounds like an excuse."

"I hate to lose," Elway said . "I hate it more now than I ever have, and we're going to do everything we can to get us back on track and get us winning football games and get back to competing for world championships."

Candidates will also see a rabid fan base that's equally impatient, an organization with sparkling training facilities and three shiny Super Bowl trophies and a team with the wherewithal to make a big splash in free agency for the first time since Elway signed Aqib Talib, Emmanuel Sanders, DeMarcus Ware and T.J. Ward to Denver in 2014.

The next hire will be the Broncos' sixth coach in 12 years.

"It's a short leash for anyone that comes in," cautioned linebacker Brandon Marshall.

"I don't think there's anywhere better in the NFL to coach," Davis said. "I feel like it's a big position that a lot of people want to fill."

Two others are in the mold of 32-year-old Rams coach Sean McVay, including his QBs coach, 35-year-old Zac Taylor, and Brian Flores, the 37-year-old de facto defensive coordinator for the Patriots.

"We are going to try to find that guy with the 'it' factor, that can make those right decisions and also lead men," Elway said. "We're confident we can find that guy."

Because he sure doesn't want to be doing this again anytime soon.