Broncos once again leaning on defense as young offense grows 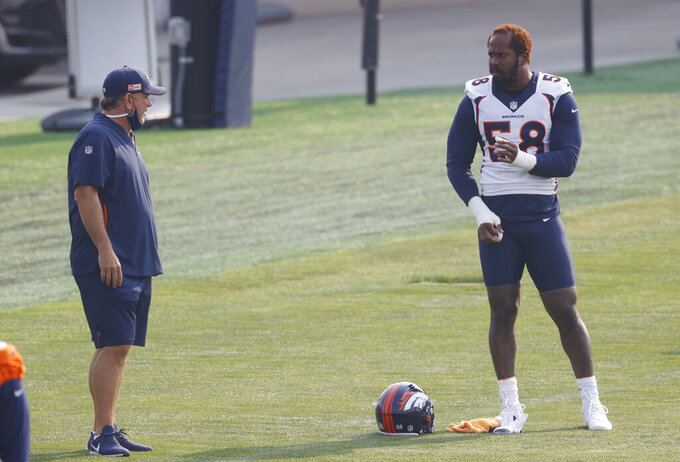 So Elway bypassed the deepest free agent class of quarterbacks in our lifetime and built around his swashbuckling quarterback who went 4-1 his rookie season after spending three months on IR with an injured thumb.

Elway tempered his enthusiasm, however, when the coronavirus pandemic hit, robbing the NFL of its normal offseason and erasing the preseason.

Especially hard hit were young teams like the Broncos who are adjusting to a new coordinator and fitting in a handful of new starters.

“I don’t think we can expect with no offseason for us to come out and be hitting on all cylinders,” Elway said, adding “it’s going to be a slow build.”

“The expectations of Drew — I mean, he did play well for five games, but that was only five games last year,” Elway added. “He didn’t have the offseason this year, which for young football players is always very, very important. I know he spent a lot of time throwing to the receivers and getting the timing and doing what they could do away from the facility. We’re very young on the offensive side.”

Lock agreed that “it may not be the prettiest at first,” but insisted his own ambitions for 2020 haven’t abated one bit.

“Not being able to be with the guys as much as you normally would is not going to change how I feel going into the season,” Lock said. “I still want to do the things ... I thought we could do this year.”

The superstar linebacker is so eager to end four years of frustration that he reshaped his body and his mindset in the offseason.

“I didn’t take any time off, I didn’t take any vacations, I didn’t do anything but work out and grind and reinvest all the time that I would usually spend on, like, endorsements and all this other stuff,” said Miller, the biggest NFL star to reveal a bout with COVID-19 back in the spring. “I just reinvested that time in myself.”

Miller’s buffed body is matched by a new approach to leadership after watching Kobe Bryant’s eulogy and Michael Jordan’s documentary.

“I’ve got to become more of a leader,” Miller said, “like Kobe and Jordan were.”

Other pressure points for the Broncos as they try to reverse their slide that has seen them average seven wins a season since winning it all:

Miller is coming off a disappointing eight-sack season, and pass rush partner Bradley Chubb is coming off a torn ACL last September. The acquisition of D-tackle Jurrell Casey from the Titans should help both of them stack up sacks again.

“It’ll be incredible,” Miller said of playing alongside Casey. “I’m looking forward to it. He’s a great player, five-time Pro Bowler. I’ve been around him at the Pro Bowl several times. ... We can do all sorts of things together.”

The Broncos have one of the deepest tight end corps in the NFL with the additions of Okwuegbunam in the draft and Nick Vannett in free agency joining last year’s first-round pick Noah Fant and oft-injured holdover Jake Butt and Troy Fumagalli.

Okwuegbunam and Lock have built-in chemistry from their time together at Missouri, and it showed during red-zone drills at training camp when the two hooked up time after time for touchdowns.

“We’ve been pleased with his play,” coach Vic Fangio said of Okwuegbunam, who caught 17 TD passes from Lock in their two seasons together in college. “He’s obviously a big target at 6-5½. He runs well. He’s got good hands.”

Fant figures to serve essentially as the Broncos’ No. 3 receiver, especially with Hamler’s hamstring injury that sidelined him in August.

Jeudy was considered the best pure route runner in this year’s deep draft class of wide receivers, and he wasted no time dropping jaws at practice this summer.

“He can get in and out of his breaks better than anyone I’ve ever seen before,” Broncos safety and fellow Alabama alum Kareem Jackson said. “For him to be a rookie, his tempo and his routes, the way he can change his pace, the way he sells things, it’s very rare.”

Rarer still is the rookie who can garner praise from veterans who say his presence will hone their own skills.

“To be able to see him on a day-to-day basis is definitely going to help us,” Jackson said. “But he’s going to pose a challenge for other defenses.”