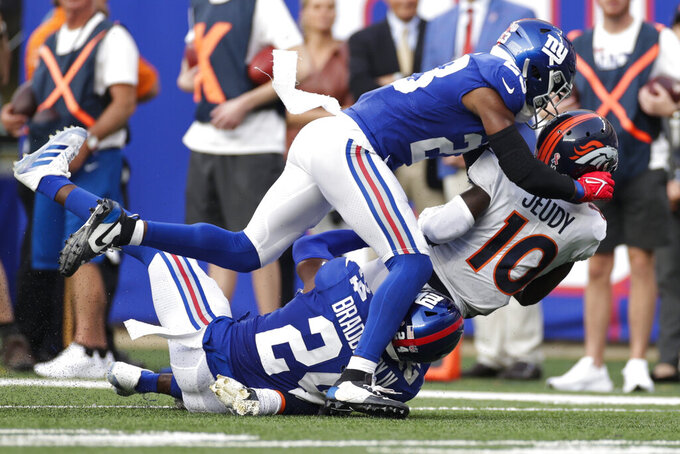 ENGLEWOOD, Colo. (AP) — The Denver Broncos were stacked at two positions to begin the season — wide receiver and cornerback — and that depth is already being tested.

Jeudy had a terrific training camp and had six catches for 72 yards before getting hurt in the opener. He's expected to miss about six weeks.

Darby was a surprise addition to IR as coach Vic Fangio never mentioned his injury in his postgame news conference or on Monday.

Both Jeudy and Darby must spend at least three weeks on IR before they're eligible to return to the active roster. While Jeudy is expected to miss about twice that amount of time, Darby's prognosis is uncertain.

In a pair of corresponding moves, the Broncos promoted cornerback Nate Hairston and wide receiver Kendall Hinton from their practice squad.

Hinton was the fill-in at quarterback against New Orleans last season when all four of the Broncos' QBs were ruled ineligible because of COVID-19 protocols. He didn't make the final roster this summer, but was re-signed to the practice squad.

Hinton was on the practice squad last season when he was called upon as the emergency fill-in at QB after backup Jeff Driskel was diagnosed with a COVID-19 infection and starter Drew Lock, Brett Rypien and Blake Bortles were deemed close contacts who had to quarantine.

Hinton completed just 1 of 9 passes in Denver's subsequent loss to the Saints. It was later revealed that the quarterbacks had met during the week in violation of the NFL's COVID-19 rules, taking off their tracking devises and putting them in the four corners of the QB room, then huddling together to review film. After reviewing surveillance video, the league told the Broncos none of them could play against the Saints in Week 12.

Darby is an eighth-year pro who spent last season in Washington, where he started all 16 games for the first time in his career. He signed a three-year, $30 million contract with the Broncos this spring.

Darby played all 61 defensive snaps against the Giants on Sunday and apparently was injured when New York QB Daniel Jones scored on a 4-yard keeper at time expired.

Darby's injury gives first-round draft pick Patrick Surtain II the opportunity to start, whether on the outside or in the slot with Bryce Callahan moving over at Jacksonville this weekend.

Surtain had a pick-6 against the Vikings in his pro debut during the preseason last month, but he allowed a 37-yard touchdown pass to Sterling Shepard in the opener.

Finally, offensive lineman Austin Schlottmann is among the four practice squad players on the Broncos' protected list this week. That's an indication starting right guard Graham Glasgow might miss Sunday's game after suffering an irregular heartbeat in the opener that forced him to stay behind for observation before returning to Denver on Tuesday.