Broncos point fingers at themselves over 0-3 start 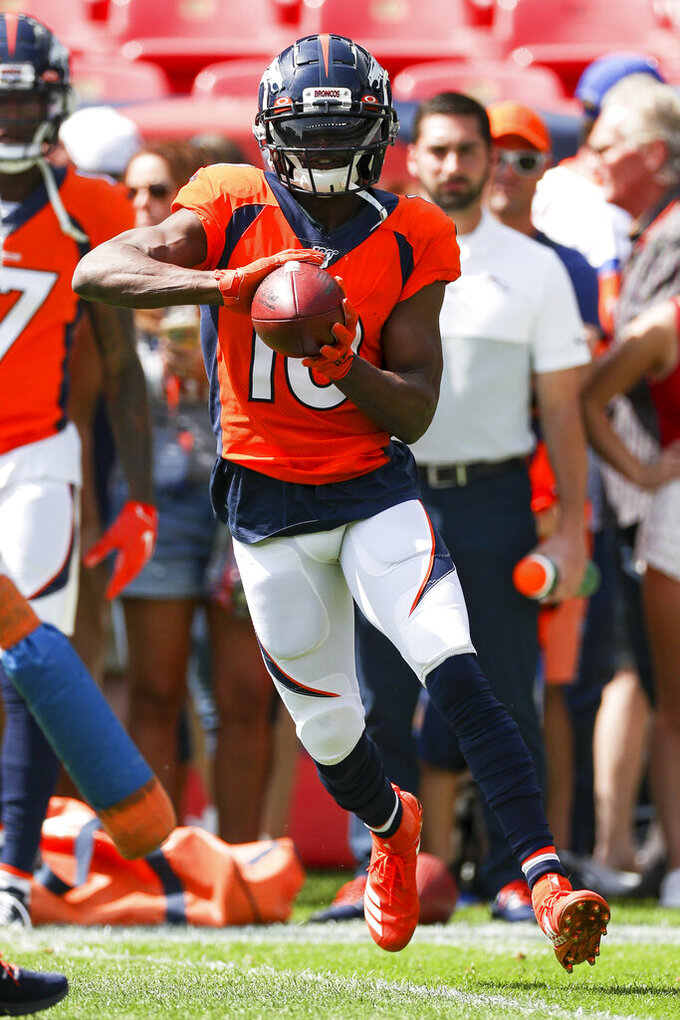 Denver Broncos wide receiver Emmanuel Sanders (10) catches a pass during warm-ups prior to an NFL game against the Chicago Bears, Sunday Sept. 15, 2019, in Denver. The Bears defeated the Broncos 16-14. (Margaret Bowles via AP)

The Broncos (0-3) are the first NFL team ever to head into Week 4 still searching for their first takeaway and first sack, which became an official stat in 1982.

Asked Tuesday if Fangio needs to be more aggressive in his play calls, Harris retorted, "He is aggressive. He's calling all-out blitzes. He's calling man (coverage). I don't know what else Coach Fangio can call. He's putting us in every defense possible to be able to make plays."

The Broncos' deficient defense is one of the biggest surprises in the budding 100th NFL season, but Harris' reaction suggests he views Fangio's conservative calls as more of a product of circumstance than strategy.

Fangio earned his first head coaching opportunity at age 60 this year after designing the NFL's stingiest defense in Chicago, the capstone to a three-decade run as one of the league's most respected defensive coordinators.

Pairing him with Von Miller was supposed to be magical, like it was when Fangio and Khalil Mack teamed up last year to help the Bears end an eight-year playoff drought.

Miller, who is two sacks sky of 100 for his career, hasn't had a single hit on the quarterback, much less a sack, in losses at Oakland and Green Bay sandwiched around a last-second defeat to Fangio's old Bears team.

On Sunday, Packers QB Aaron Rodgers was knocked down just one time, by Bradley Chubb, and said he'd never felt so good after a game as he did following Green Bay's 27-16 win.

Harris said the pass defenders and the pass rushers need to work better together to end their sackless streak and finally force some turnovers.

"We have to get on the same page, working together and making sure we have great coverage and great pressure at the same time," Harris said. "We haven't been able to do that."

The Broncos have missed new cornerback Bryce Callahan, who injured his surgically-repaired left foot in July, but they did get inside linebacker Todd Davis back last week for the first time since he tore a calf on July 18.

Opponents haven't had to take many chances against Denver because the Broncos are averaging fewer than 16 points a game and have only had the lead for 12 minutes so far.

"These first three games were weird, and we have to be able to force teams into making mistakes," Harris said. "Right now, they're playing very safe. ... Most of the turnovers happen in the passing game and if we can, we have to try to get teams to even pass the ball more."

The Broncos host the Jacksonville Jaguars (1-2) Sunday, and wide receiver Emmanuel Sanders said playing with a lead for a change would allow everyone to loosen up.

"Yeah, it helps out a lot," Sanders said. "When you're playing with a lead, if we had a 10-point lead, everybody is a little more relaxed, but when you're playing from behind it's like you don't want to say it, but you do play a little tighter because you know every play can determine the outcome of the game."

It was the other way around back when Denver was a Super Bowl contender with the Broncos setting the tone and forcing opponents into self-destructing, Sanders said.

The Broncos say they sense a turnaround coming, though.

"I think we have a good enough team to win now," Sanders said. "We've just got to stop shooting ourselves in the foot."

"Even though we're 0-3, we don't have that end-of-the-world feeling right now," Harris concurred. "We know that we're close. We've done some good things but we have to learn not to beat ourselves. We've been beating ourselves for a couple years lately."

GM John Elway is encouraged , too.

"We've had more good each game and less bad. It just hasn't been good enough," Elway said on the team's website. "I think the mindset is right. We're still working at it. We're disappointed being 0-3 but hopefully we can come home this week against the Jaguars and play like we're capable of and eliminate some of those mistakes, make some big plays and get a victory."